Summary of train workings in Worcestershire in 2011

All photographs taken by Andrew Smith unless credited otherwise. 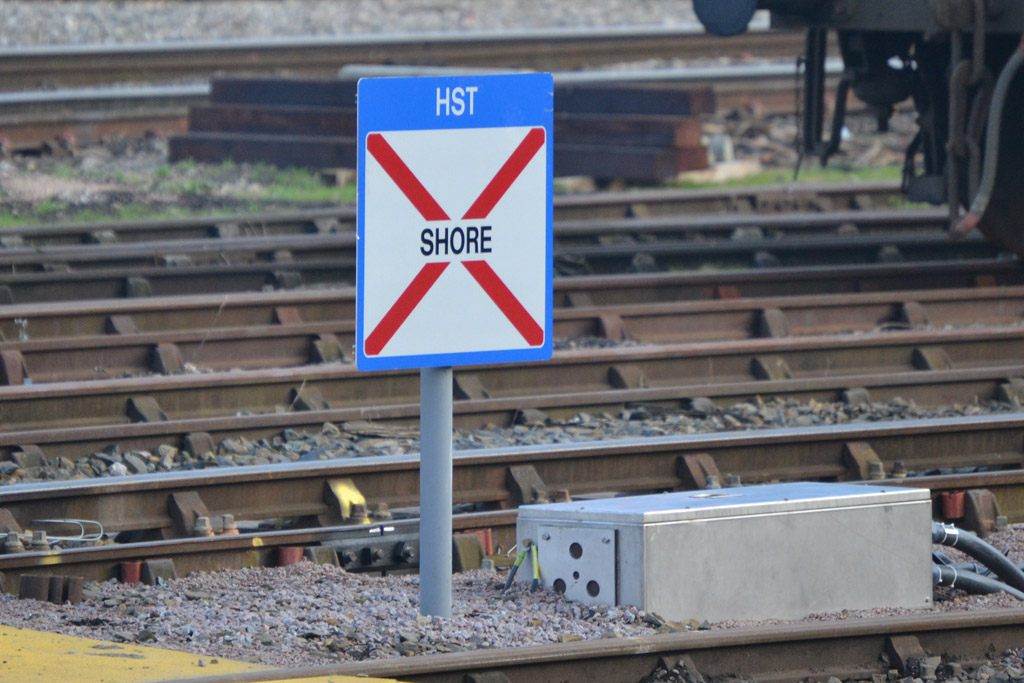 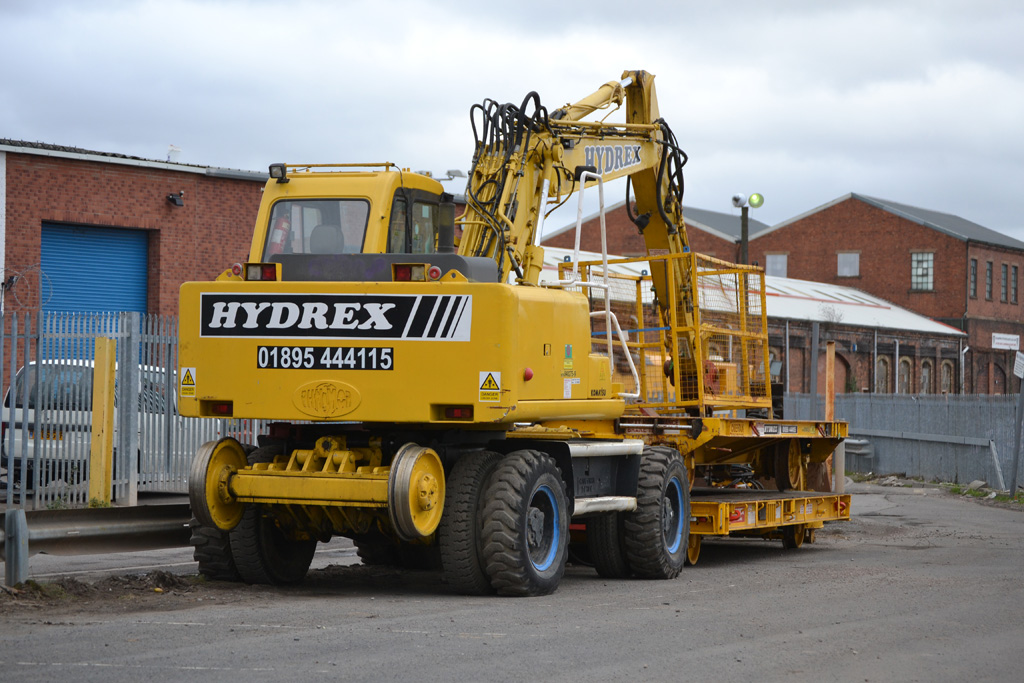 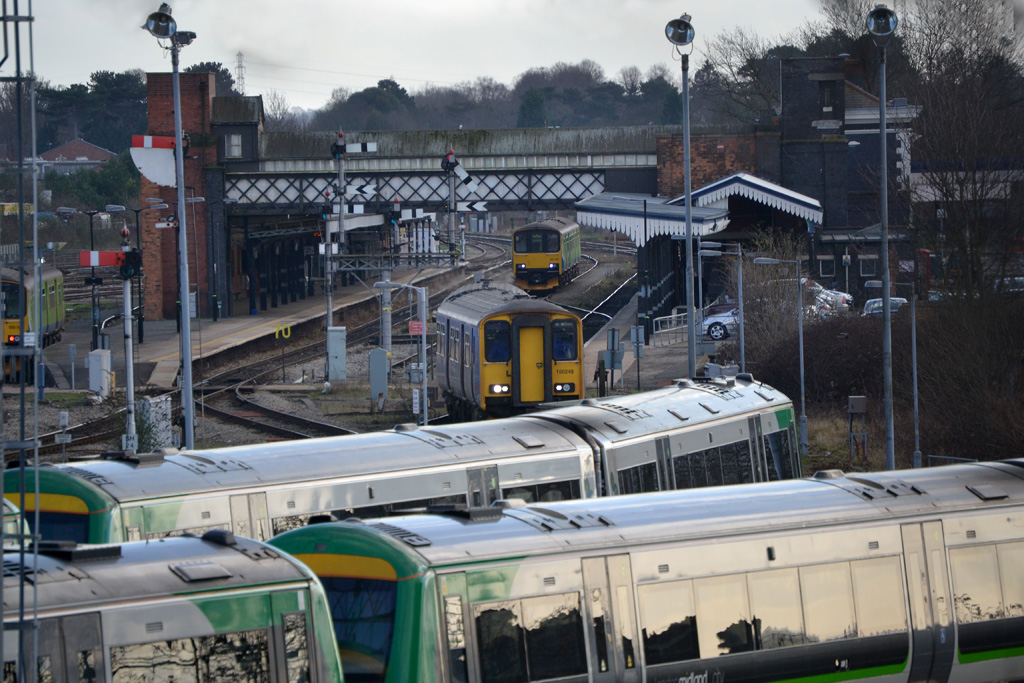 Due to overhanging trees it was almost impossible to take photographs from the famous 'Railway Walk' viewpoint in Worcester for most of the year although for a few weeks in the middle of winter and with great difficulty a view of sorts was possible. On Saturday's the 2010/11 timetable was such that four spare class 170 two-car diesel multiple units stabled on the depot with two of the older class 150 two car units in the station. On Saturday 11th February 2011 the class 170's on shed were No.170504 (just visible on the far left); No.170511 (nearest to station); No.170510 (in foreground on right hand side) and No.170505 (front, left). The class 150 diesel multiple units at Worcester Shrub Hill Station are No.150106 (on left hand side) and No.150122 (in centre road). Class 150/2 No.150248 in First Great Western livery has just left the station with a train from Brighton to Great Malvern. 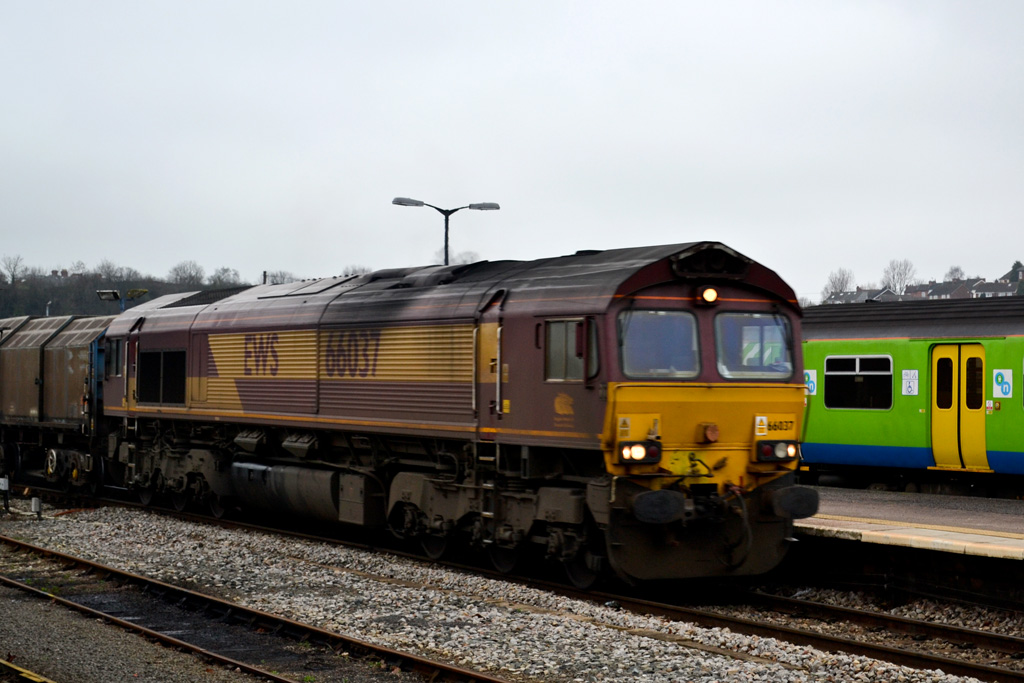 On a typically grim February afternoon EWS livery class 66 diesel locomotive No.66037 runs through Worcester Shrub Hill Station with an afternoon working from Round Oak to Margam. Photograph taken by Andrew Smith on Saturday 19th February 2011. 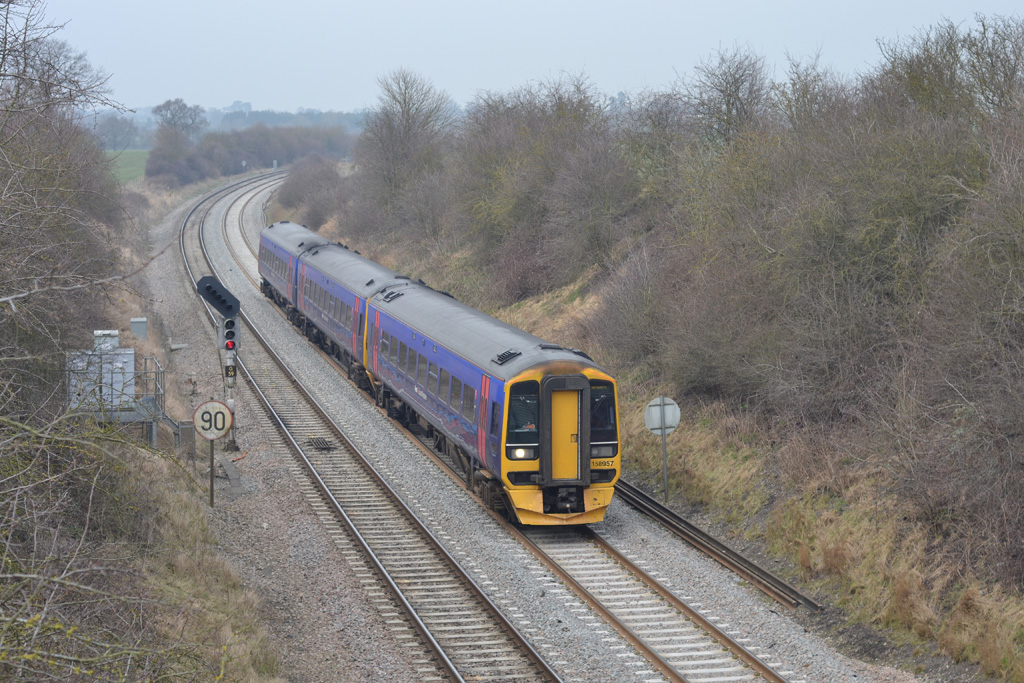 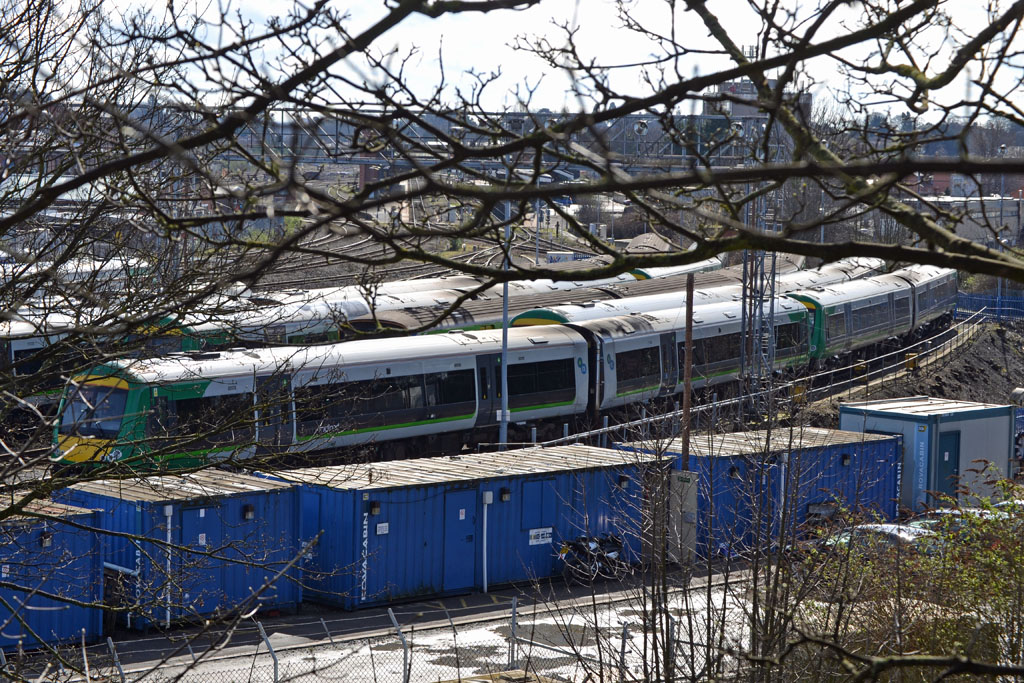 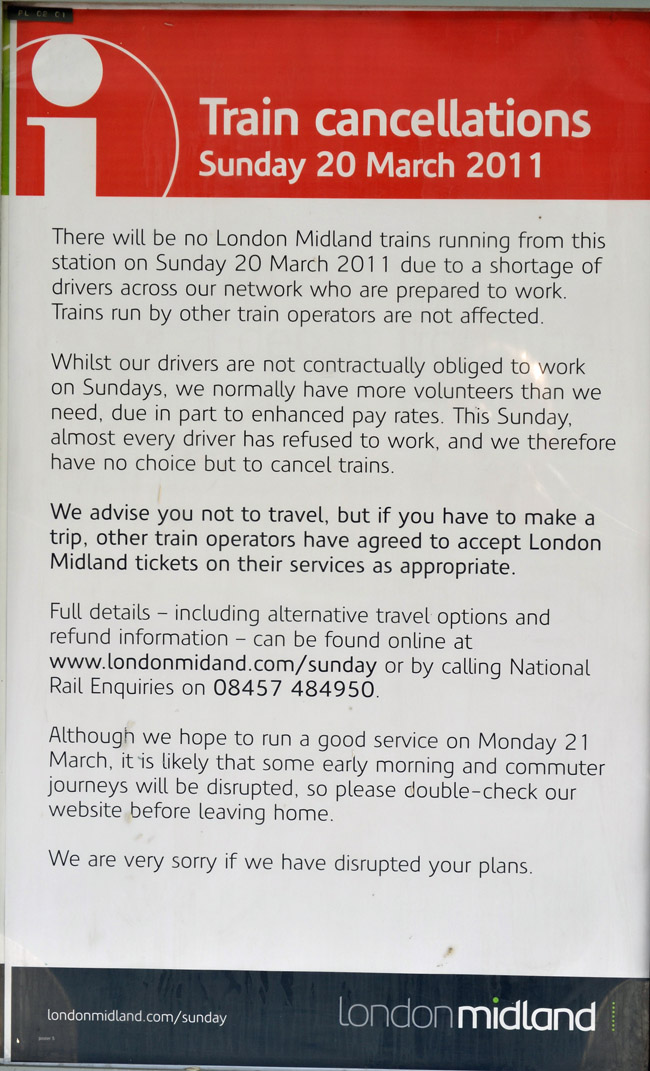 London Midland apologises for its incompetence. 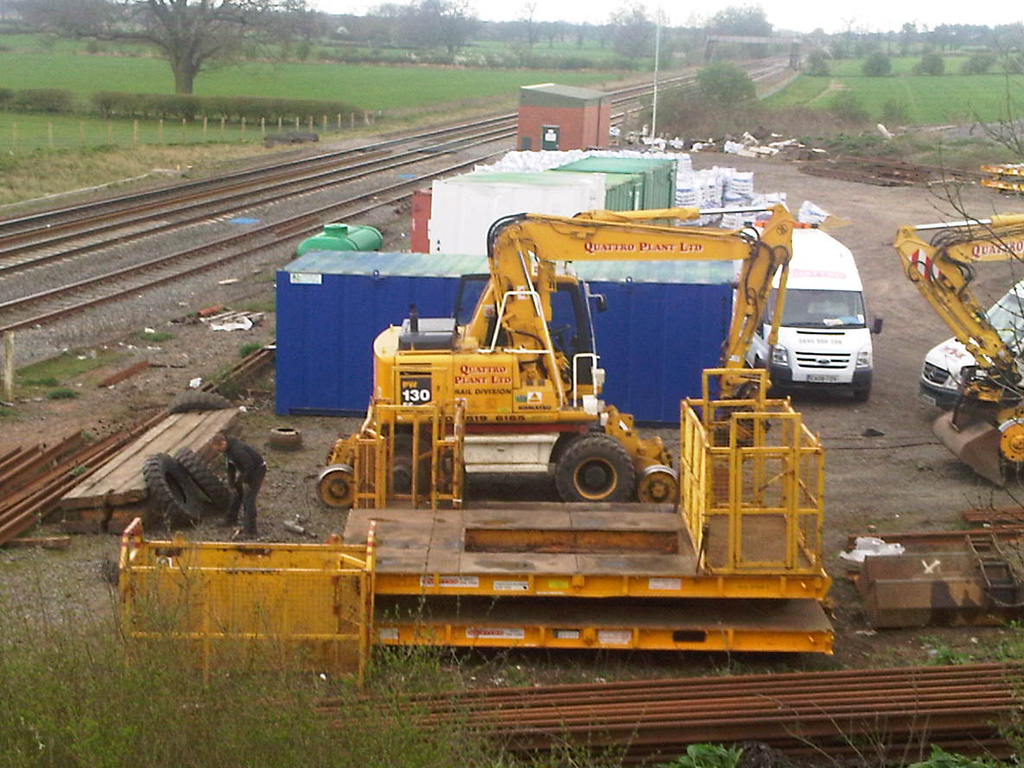 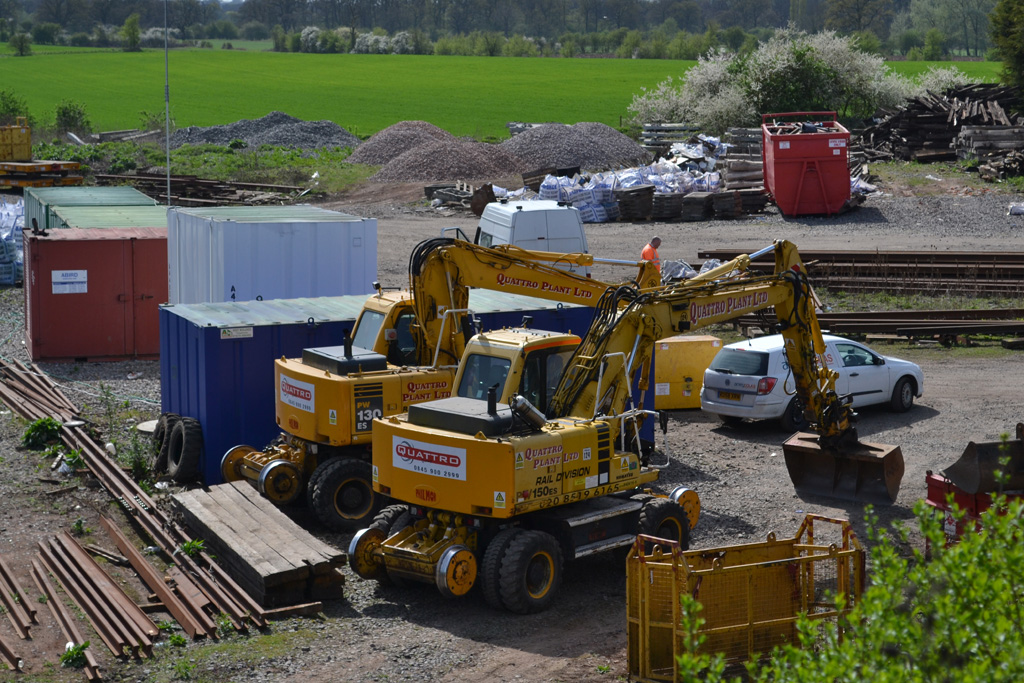 A series of overnight possessions in the Abbotswood area saw extensive use made of the rail access point and yard on the site of the former Birmingham Gloucester Railway station at Spetchley. On 4th April 2011 two road/railers, owned by Quattro Plant Ltd, were on site. The top picture shows a Komatsu type No.PW130 No.99709 940414-4 whilst the bottom picture (taken on 9th April 2011) shows a Komatsu type No.PW150 Ultra No.99709 940416-9 in front of No.99709 940414-4. Photographs taken by Andrew Smith. 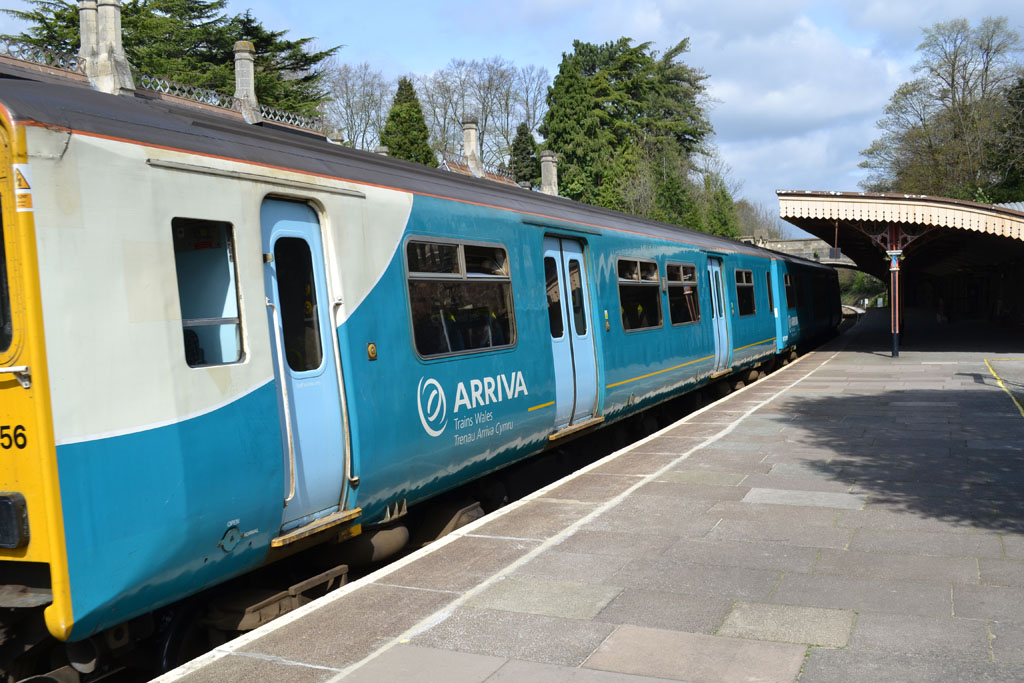 The 08:23 First Great Western slow train from Southampton Central to Great Malvern (and the return 12:51 from Great Malvern to Weymouth) ran as scheduled with an Arriva Trains Wales class 150/2 two-car diesel multiple unit. On 8th April 2011 the service was in the hands of No.150256. Intending passengers who missed the service at Southampton could leave Southampton at 09:10 and by changing at Bristol Temple Meads catch up with this train at Cheltenham Spa and still get to Great Malvern at 12:33pm. On 12th April 2011 and for the rest of the month this service was operated using an FGW Class 158 two-car diesel multiple unit but by 4th May 2011 the use of the hired Arriva Trains Wales set had resumed. Photograph taken by Andrew Smith. 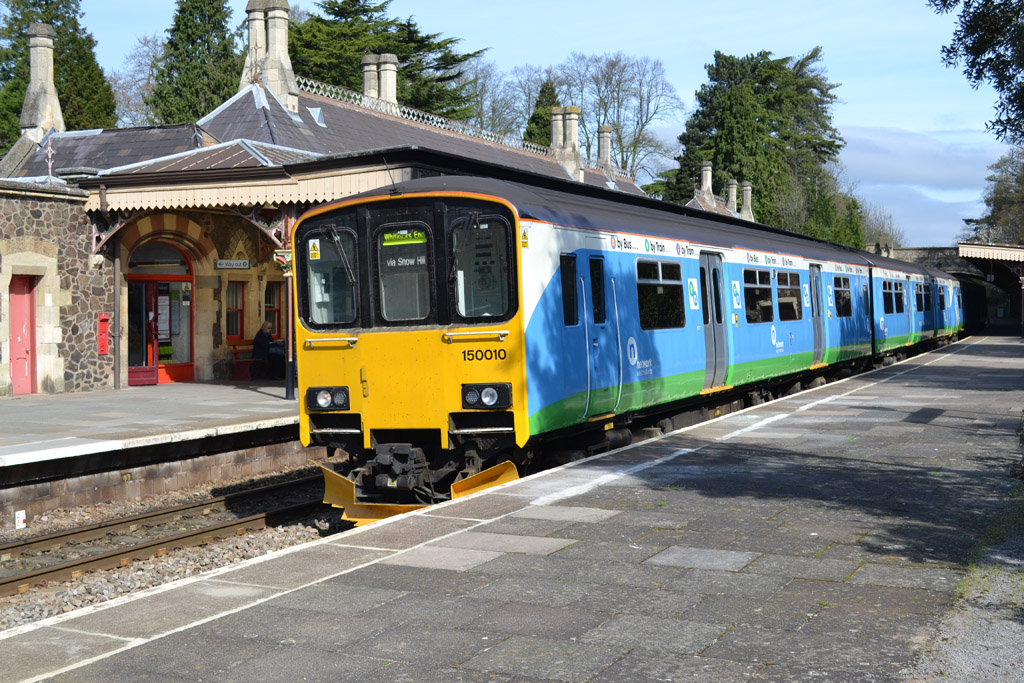 On 7th April 2011 Class 150/0 three-car diesel multiple unit No.150010 was noted at Great Malvern, with the 09:19 service from Whitlocks End, running as a two-car set (without the additional class 150/2 car), in company with two-car unit No.150132. Both units were in Network West Midlands livery. Thomas Bull advises that the 150/2 car had gone for works attention prior to transfer to the Northern franchise. Photograph taken by Andrew Smith. 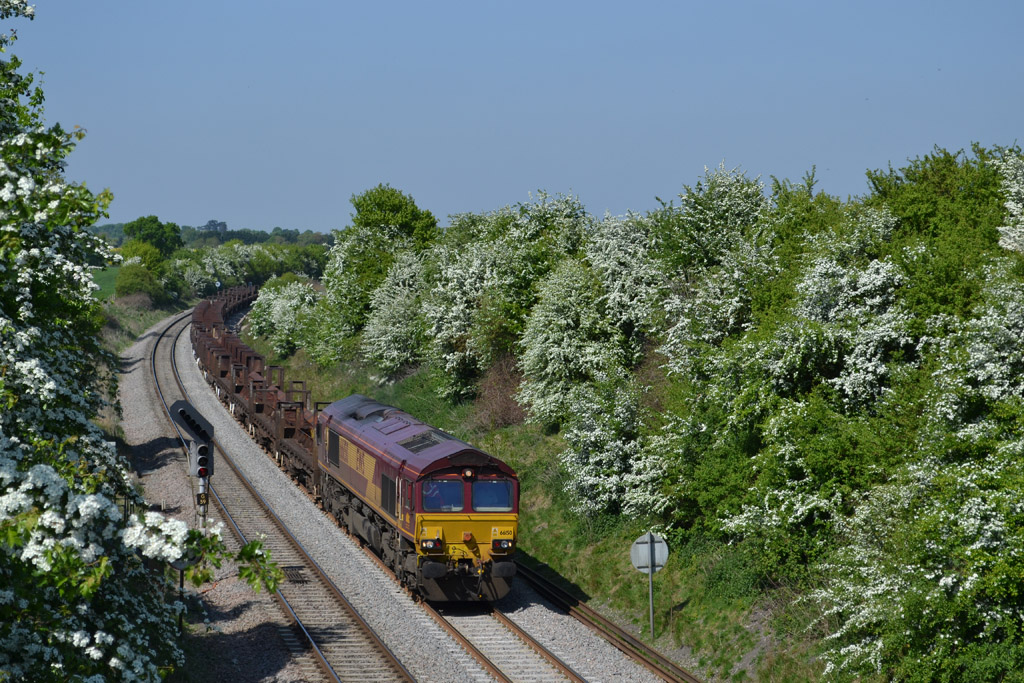 One of the few southbound freight trains that could be relied upon to run through Worcestershire at a reasonable time for photography was No.6V92 10:18 Corby to Margam empty steel wagons. On 28th April 2011 it passed Abbotswood at 14:36. The train was running about ten minutes late and caused the closely following 07:23 Cross Country Trains service from Dundee to Exeter to be delayed by a similar amount.

Keith Gunner advised the identity of the First Class Mark 1 carriage that appeared in April 2011 on a piece of ground alongside Great Malvern Station. It was built by British Railways at Swindon Works (lot number 30089) and is type FK No.13089. It came from the Gloucs Warks Railway at Winchcombe. It is privately owned and NOT open to the public but can be viewed from passing trains or photographed from the 'down' platform at the station. 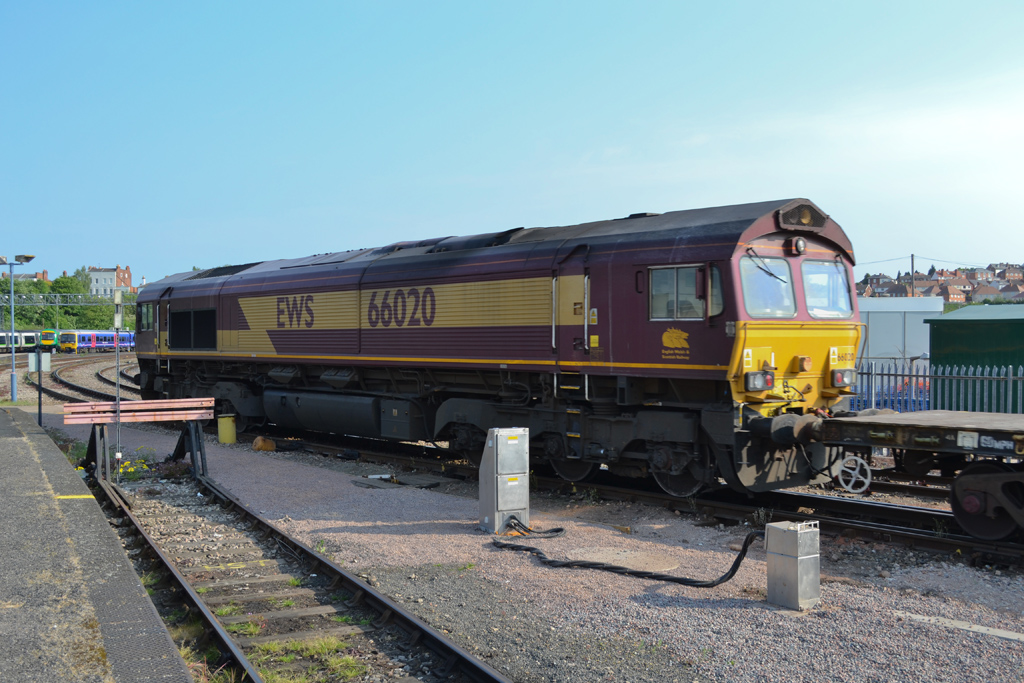 On a bright and sunny day class 66 diesel locomotive No.66020 departed from the yard at Worcester Shrub Hill with an engineering train. The three diesel multiple units stabled at the depot on the left hand side of the photograph were London Midland's class 170s Nos.170509 and 170630 with First Great Western's class 166 diesel multiple Unit No.166206. Photograph taken by Andrew Smith on 30th April 2011.

The Times newspaper reported, 12th May 2011, that First Great Western was not taking up its option to extend the franchise to cover the period 2013 to 2015. 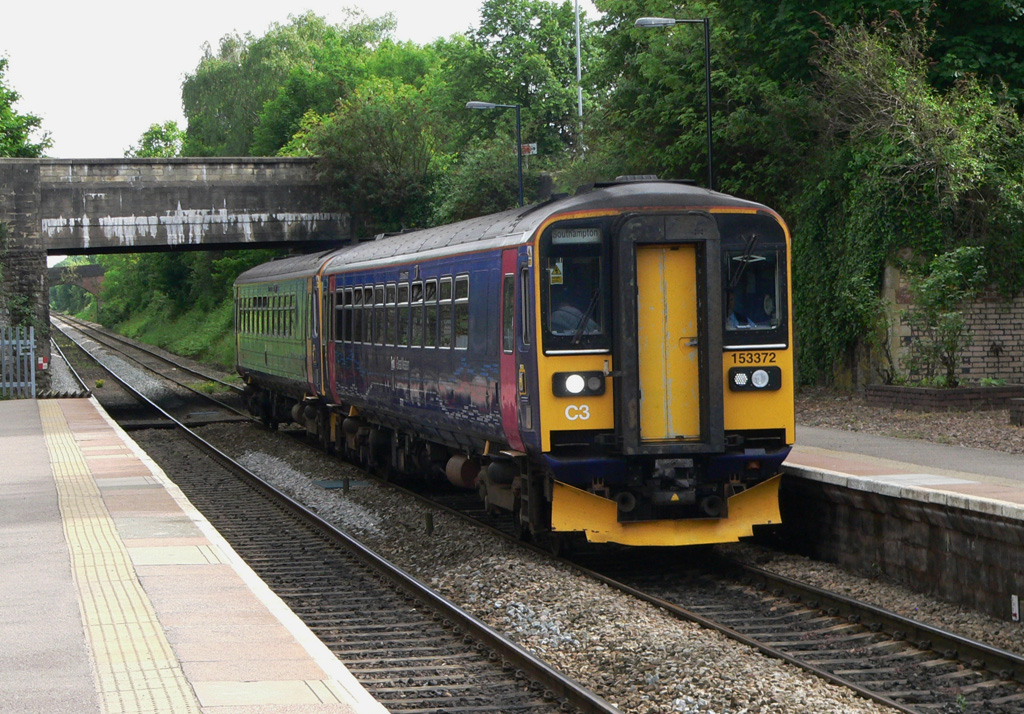 On 11th May 2011 Robert Cooke caught this unusual combination of a pair of class 153 single car railcars (Nos.153372 153305) on the 16:49 First Great Western service from Great Malvern to Southampton Central. The train had just passed under the Worcester Road bridge and is slowing to stop at Malvern Link Station. 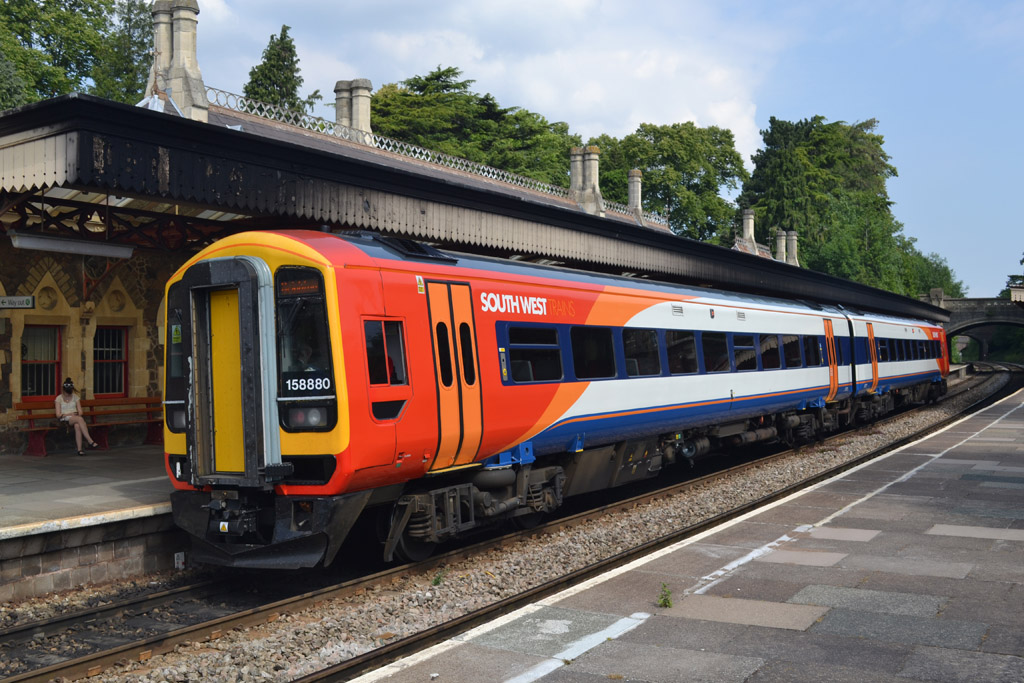 Since the start of the May 2011 timetable the 07:23 First Great Western service from Warminster to Great Malvern and 10:51 return to Brighton was worked by a South West Trains class 158 two-car diesel multiple unit. On 4th July 2011 No.158880 was on this duty and was photographed by Andrew Smith at Great Malvern. Tipped off by 'Markthegooner' (sorry real name not known) that train code No.5Z20 Tyseley to Bristol was being re-routed via Worcester the opportunity to photograph ex-GWR 'Castle' class 4-6-0 locomotive No.5029 'Nunney Castle' in perfect weather was too good to miss. Photograph taken by Andrew Smith on 9th July 2011. 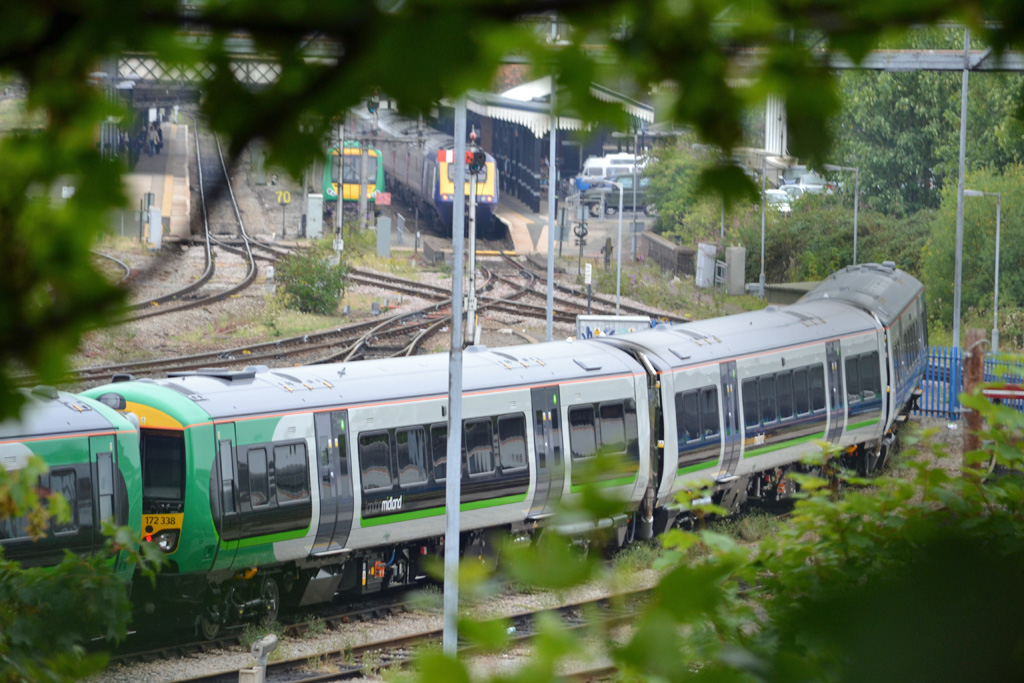 On Friday 29th July 2011 Worcester Depot played host to new class 172 three-car diesel multiple units Nos.172338 and 172337. Half an hour trying to photograph through the forest at 'Railway Walk', produced just one artistic photograph which is nevertheless full of interest. London Midland livery class 170/6 three-car diesel multiple unit No.170632 can be seen stabled in the centre road at Shrub Hill Station. Alongside the class 170/6 unit is a First Great Western 'HST 125' train headed by power car No.43194. The 'HST' had recently arrived with the 15:51 service from London Paddington (train code No.1W37). The class172's displaced the class 150s which from the autumn were transferred away. Photograph taken by Andrew Smith. 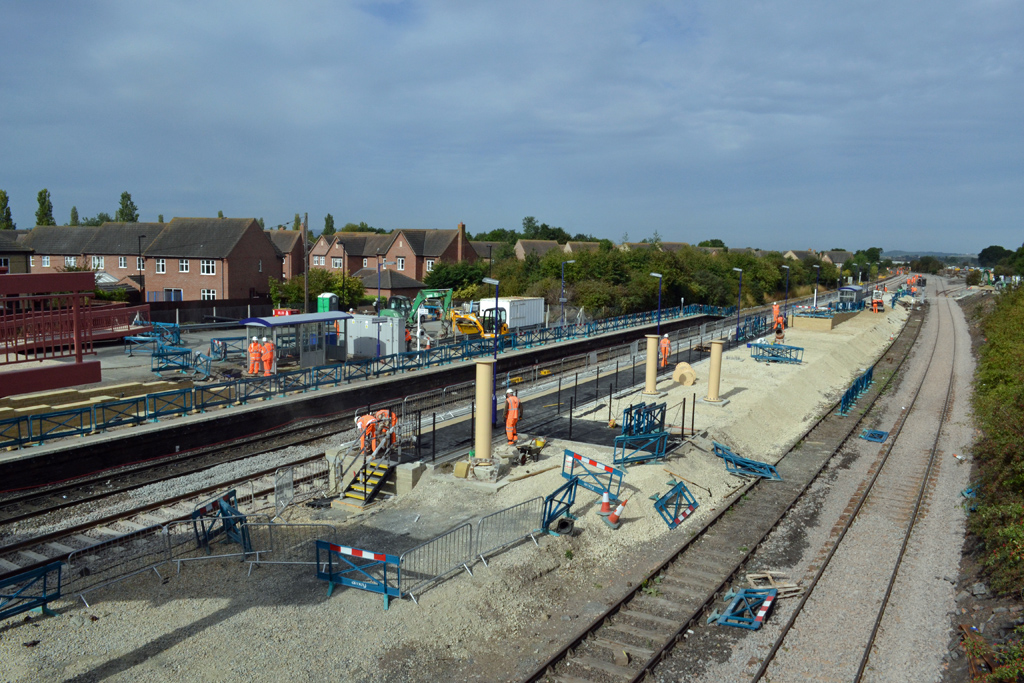 On 17th August 2011 Honeybourne Station was rapidly taking on the appearance of the days when it was known as Honeybourne Junction. A new footbridge (just visible at the far left) was being assembled as work proceeded on the new 'up' platform. Old style track was in place of what could become a new Platform 3. New colour light signals to be operated from Evesham Signal Box were in place together with an extension of the line to Long Marston (right) and Engineers' sidings (top right). Several items of on-track plant were in the sidings and more was in use at the level crossing at Littleton Badsey. 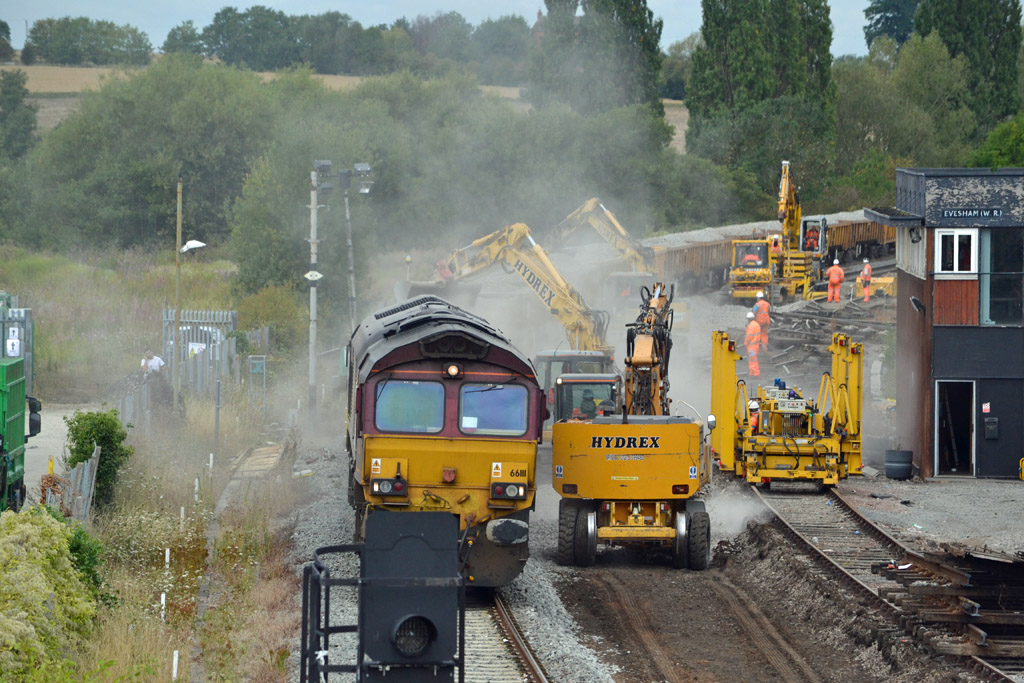 Also on 17th August 2011a ballast train, headed by EWS livery class 66 diesel locomotive No.66111, from Bescot Virtual Quarry was being unloaded by several Hydrex road/railers at Evesham. The one alongside the locomotive is 99709 940240-3 which is a Case WX170 Megarailer converted for rail use by Rexquote. 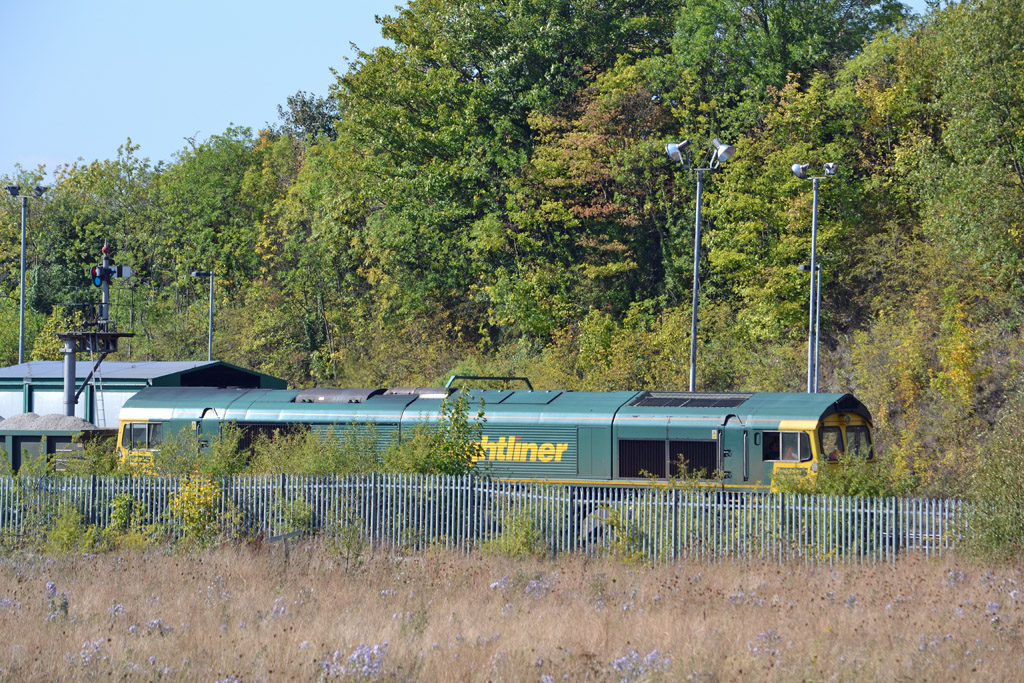 Freightliner livery class 66/5 diesel locomotive No.66546 alongside the diesel multiple unit sidings at Worcester with train code No.'6G43' 09:39 loaded box wagons from Croft Quarry to Brierley Hill. The locomotive runs round the train in Worcester yard, having arrived via Kidderminster. The returning empties also ran round in Worcester yard later in the day before departing via the Lickey Incline. This train appeared to run for about a week at a time and then not again for several months. Photograph taken by Andrew Smith. 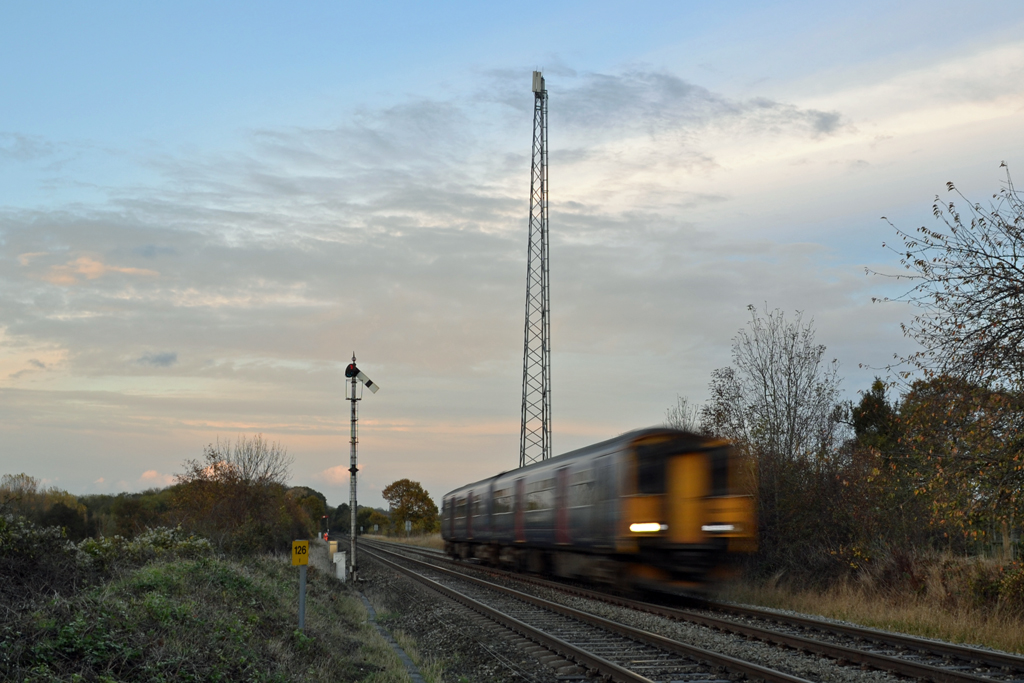 As the last light of the autumn sun faded away another photographic season came to an end. The long exposure time chosen has nicely blurred class 150/2 two-car diesel multiple unit No.150219 as it hurries the 12:23 First Great Western service from Southampton to Great Malvern past the site of Newland Halt. Photograph taken by Andrew Smith.