The details of the standard gauge Cadbury locomotive fleet are well known and full details are available in 'Industrial Locomotives of the West Midlands' published by the Industrial Railway Society and in other publications.

Four photographs (of Nos.1 (the second), 6, 10 and 12) were taken by (and remain the copyright) of Roger Hateley on the occasion of an official visit on 4th March 1961. The other photographs come from the Cadbury's official collection and are reproduced here by kind permission of the Cadbury Consumer Relations Department. 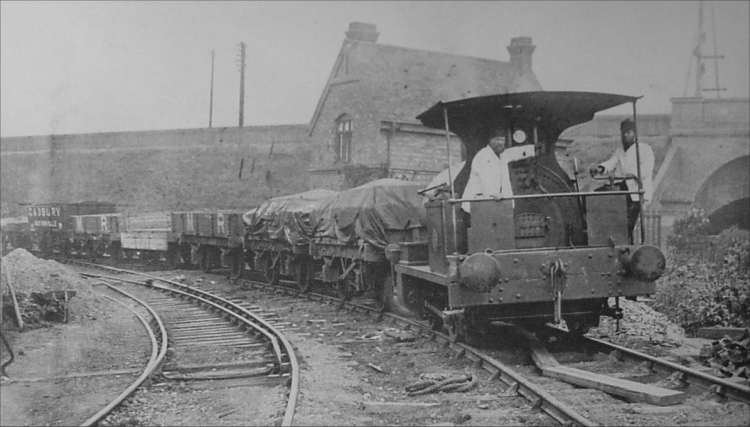 This open cab locomotive was the first to be delivered to the Cadbury factory at Bournville . This photograph was probably taken in the late 1880's and it is interesting to note that as well as two wagons with Midland Railway markings there is also one marked up as 'Cadbury Bournville.

(The locomotive was acquired from Peckett's after having been used on a railway contract at Bournemouth. It was sold to a contractor in Broxwich). 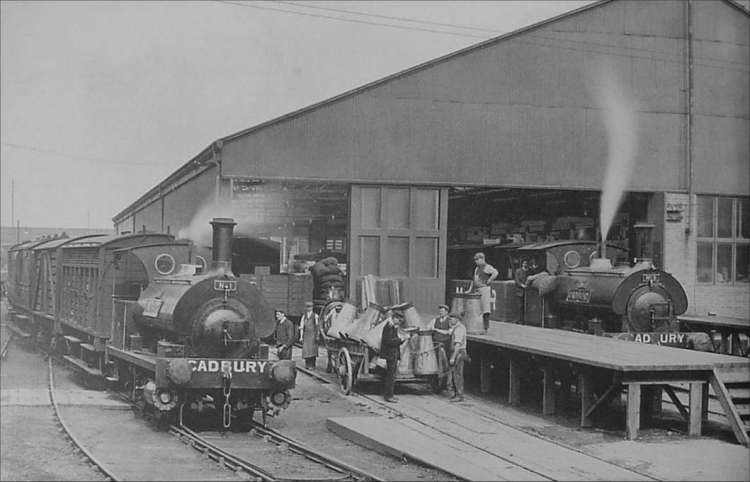 This fascinating photograph that was taken about 1912 shows two of the three new locomotives that were bought from Dick Kerr & Co Ltd of Kilmarnock. This is one of the last known photographs that shows these locomotives at Bournville. The disposal of the above two locomotives is not known but no photographs have been published showing these locomotives after World War One so it is probable they were requisitioned for the war effort and written off. 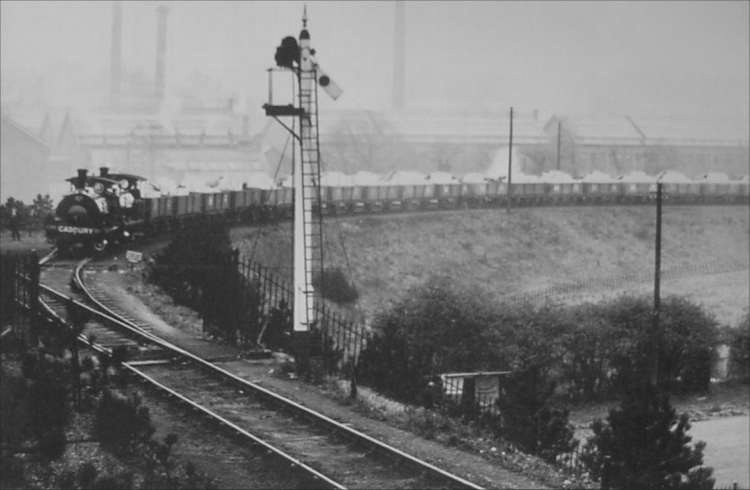 The two Dick Kerr locomotives hauling this long rake of Midland Railway wagons are No.2 (see above) and No.3. The date is about 1903. 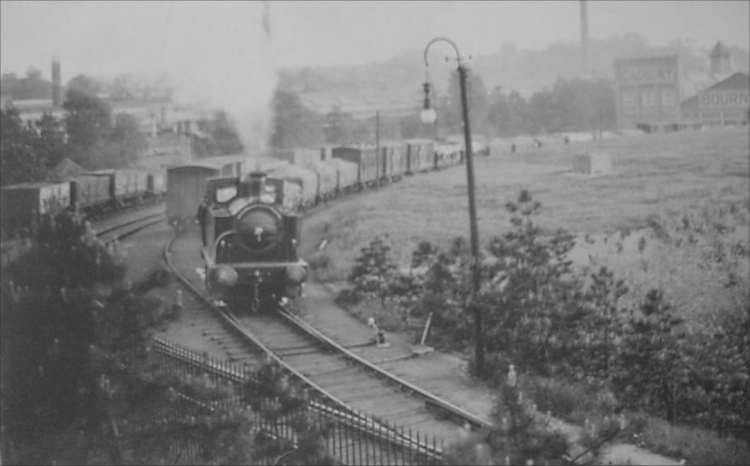 This is No.4 =the first of four new locomotives built by Avonside of Bristol. 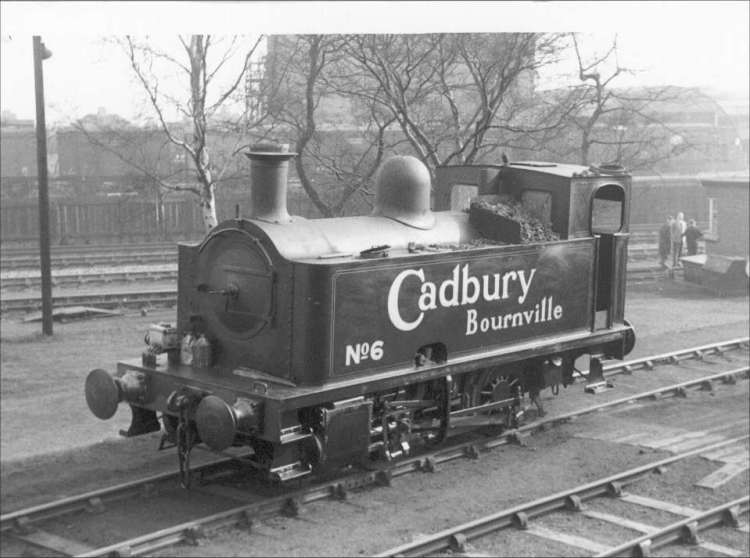 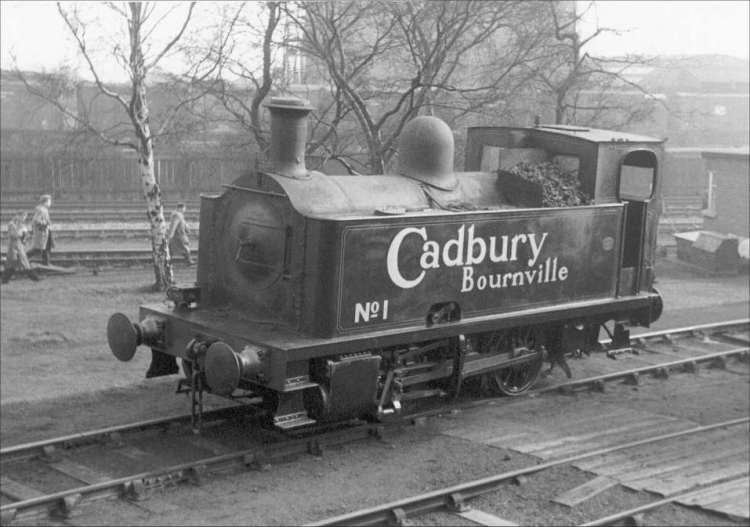 This locomotive is the second No.1:

The MIAC is still seeking a photograph of the following locomotive that worked both at Bourneville and Blackpole:

(This locomotive was also at the Blackpole site). 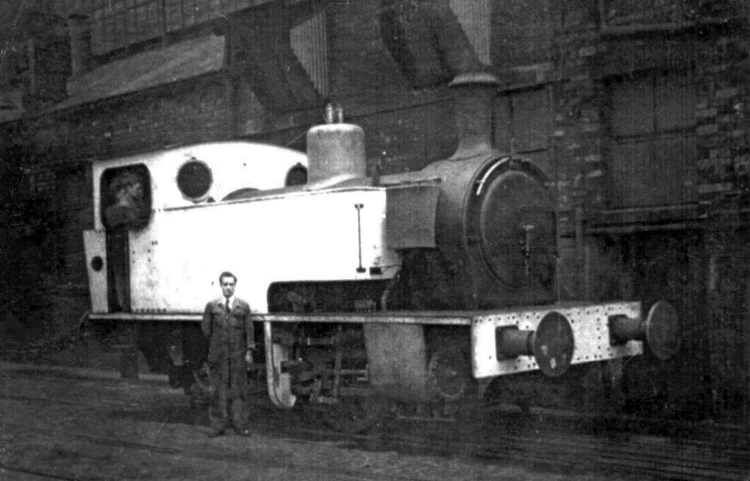 Mr Peter Pascall of New Zealand has kindly allowed the above photograph to be made available on this site. This shows HE 3665 at the Hunslet Engine Works in Leeds in 1949. Mr Pascall has provided the following article to accompany the photograph:

My diary for 28th March 1949 refers to Hunslet 3665 of 1949 (being prepared for Bourneville) and records that 'I was working on 3665, rejointed steam chest, finished cylinder cock (drain) gear. Pinning up all joints and nuts.'. The following day's diary shows 'finished 3665 and steamed'. On the 1st April I noted that the 'piece draw for 3665' took place. This was a method of sharing the bonus payment for the job among the various trades involved.

My photograph shows the locomotive at the end of the multi-gauge test track. In the foreground is Peter Moralee, another cadet. In the cab can just be seen myself, with the Shop Boy looking over my shoulder. My job that day was to run the locomotive up and down the track many times and check all the controls / brakes and safety equipment. It was quite fun really and I am sure many readers would have given their right arm for such a job! The locomotive is, of course, in its primed (unpainted) state. I cannot recall whether it was finish-painted at Hunslet or at Bourneville.

Hunslet 3665 was a very neat engine =easy to service (being fitted with outside Walschaerts valve gear) and with good visibility. It was reasonably large for an 0-4-0. I'm afraid you can only just see the whistle cord that I carefully spliced! The locomotive was scrapped in March 1966 after a life of just seventeen years.

When engines were dispatched from Hunslet they usually formed part of a normal goods train. The locomotive would naturally have its rods removed and there would be a 'cone' of dripping or suitable hard fat on the top of each axle box. A fitter would go with the train and walk around the locomotive whenever the train stopped =and, should any fat have melted, would know that there was a danger of a 'hot box' and the locomotive would have to be shunted off the train as soon as possible. This didn't happen very often.

In 1949, Britain was recovering from World War 2 and there was still rationing. There were few cars about. In the Hunslet machine shop there were still lines of overhead shafting providing power to the various machines. This didn't stop often and, if a problem arose with a single machine, a 'Beltman' would trot up with his short ladder with a curved metal top. This actually rested on the revolving shaft. He would then go up, flick off the offending belt and replace it with a new one cut to size on the spot. The Health and Safety Officers nowadays would have a fit = but in those days there was seldom an accident anywhere.

In the various departments, the Foreman still wore his bowler hat as a symbol of authority. For locomotive building the departments would include: Blacksmiths shop, Boilermakers, Coppersmiths shop, Machine shop, Steel rolling and riveting, Erecting shop and Paint shop. Various sub-groups did specialized marking-out. A tool room issued 'length-bars' for measurements, drills and hand tools.

There was no heating in the Erecting shop. On a cold February day in Leeds you can imagine trying to keep warm when using a compressed-air drill or grinder with the sheet ice on its exhaust port. Big spanners (and I mean BIG) were usually warmed up over a fire burning in a suitable 40 gallon drum = or they would take the skin off your hand. Any visit to the Forge or Coppersmith's shop was welcome as they always had a huge fire for welding and brazing.

A most interesting place was the 'archives' =a cellar under the canteen, which held cases of drawings (dating from the mid 1800's) of Avonside, Kerr Stuart and other company's locomotives. Some of these drawings were on cartridge paper, in Indian ink and hand painted =real works of art. I do hope that somewhere was found to store these treasures now that the firm has ceased trading. [Editor's Note: The Hunslet Engine Compaany was still trading from a site in Leeds in 2010].

I am sure that readers will have seen a Hunslet 'Austerity' 0-6-0 saddle tank. This design was intended to be a real austerity job designed for a short life span. No frills, no comfort, etc. It is noticeable how many of these are still at work. The reason is that no-one told the tradesmen what austerity meant and they supplied an engine that may have been painted quickly but was 'made right'. Even to taking off the sharp edges on the footplates and running boards! I saw one preserved at Haven Street in the Isle of Wight in 1998 and it looked superb =and a credit to them. 'Austerities' were used in all sorts of jobs from shunting to general goods =and a sprightly passenger service when required.

The drawing office at Hunslet was quite large and I thoroughly enjoyed my time there. Drawings were made in pencil, then traced with Indian ink pens on to a light blue tracing cloth. This initially was used to make blueprints but later we had an Ammonia process that gave a 'black line on a white background' linen copy of a tracing. Drawings took a long time to produce. There were no calculators (except for an adding machine in the Chief's office) and all calculations of balancing, etc, were done the hard way =and cross checked many times.

A further note in my diary states: 'May 10th 1949 Cadburys was photographed'. This would have been the works photo before despatch. In 'them days' it took ages to properly paint a loco, with many hand-applied coats of paint and rub downs. It was, I believe, the standard paint job like the others =chocolate brown with the usual decorative 'Cadbury' logo. It would have been delivered to Bourneville about that week.

At the end of the day there would be a solid stream of men from Hunslet, Hudswell Clarke and other companies going down Jack Lane to the waiting line-up of double-decker trams. These trams were real 'people movers' and can be compared favourably with the 'gridlock' which would happen today with individual cars!

I left Hunslet in 1951 at the request of HM the King (we were deferred national service until our 21st birthday). As my family had moved south I did not return to Leeds =but Hunslet was a good training ground for an engineer and served me well!

Best wishes to any 'Hunsletite' who reads this! 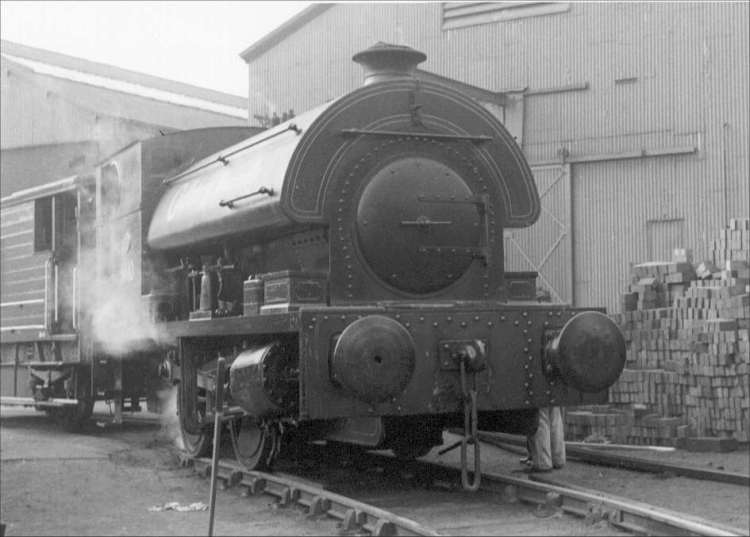 This is the last new steam locomotive purchased by Cadbury's:

To replace the steam fleet four new diesel locomotives were bought from the North British Locomotive Co Ltd of Glasgow: 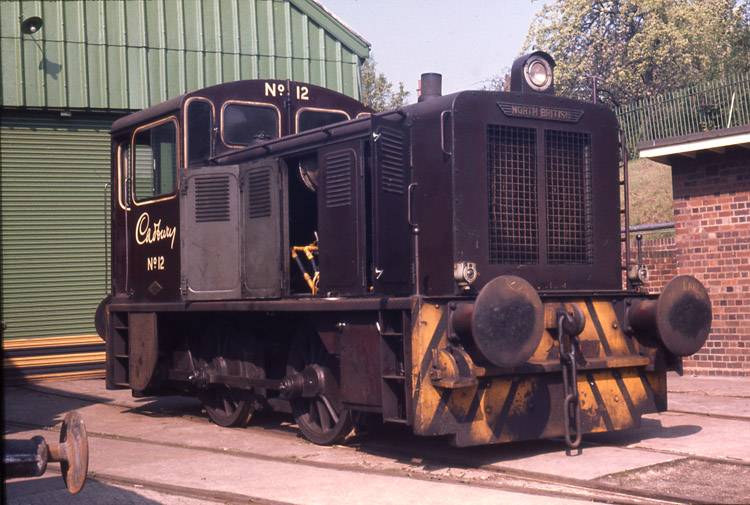 No.12 was the second diesel bought by Cadburys. It was built by the North British Co Ltd of Glasgow (makers' number 27940) and delivered in 1959. It was sold to the Rom River Reinforcement Co Ltd, Battersea, London in October 1976.

This photograph which was taken on 8th May 1976 is shown courtesy of the Industrial Railway Society Howard Earl collection. 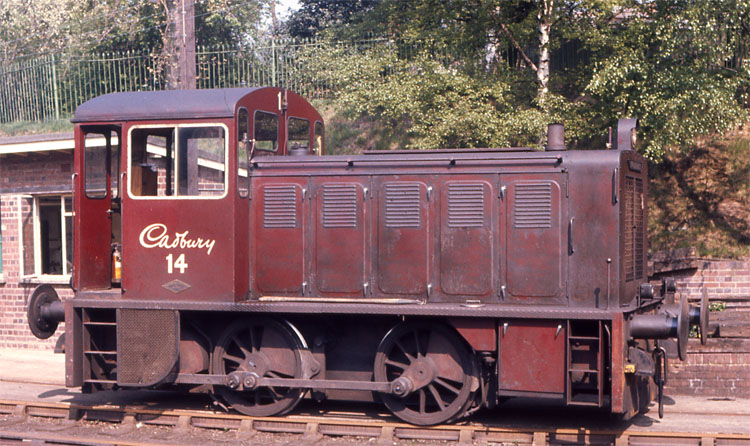 This is 0-4-0DH North British 28037 of 1961 which was delivered new to Bournville in 1962 and was at Cadburys until the end of diesel haulage after which it was sold (in November 1976) to Thos.W.Ward Ltd of Briton Ferry, Glamorgan.

This photograph which was taken on 8th May 1976 is shown courtesy of the Industrial Railway Society, Howard Earl collection. 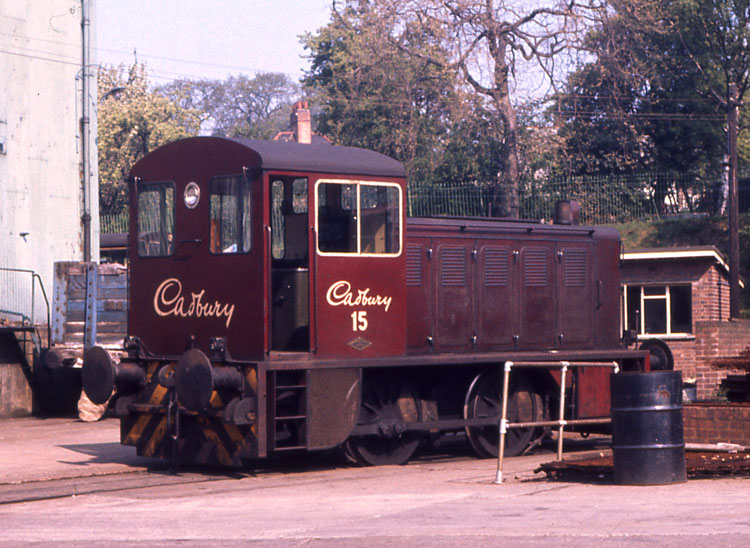 This photograph which was taken on 8th May 1976 is shown courtesy of the Industrial Railway Society Howard Earl collection.

The MIAC would be delighted to hear from anyone who can supply for display on this site a photograph of any of the locomotives for which we have no photograph including the following:

There was also a narrow gauge (2'0") gauge railway that may have been built in the 1920's. One locomotive (Motor Rail 2284 of 1924) is believed to have worked here and a photograph believed to show this locomotive (and said to have been taken in 1928) can be found in this excellent book:

There was also a narrow gauge railway (also with a Motor Rail locomotive) at Blackpole so the locomotive might also have worked there. 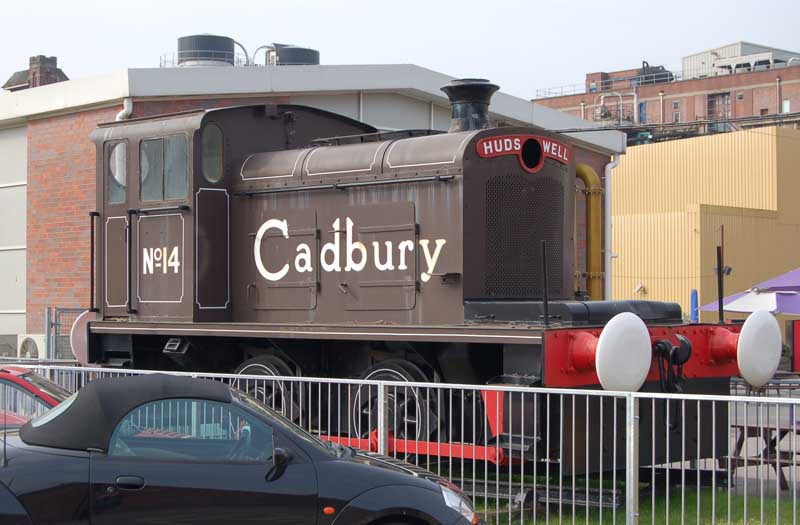 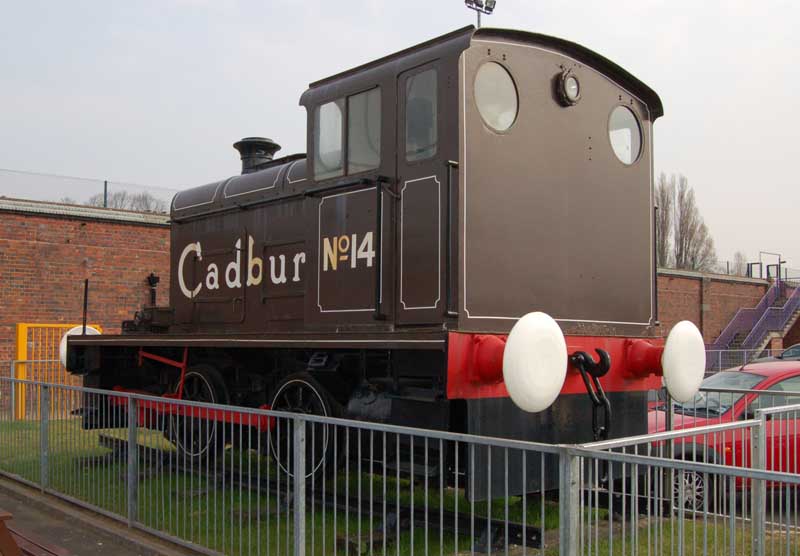 These two photographs were taken by Andrew Smith on 13th April 2007 and show 'CADBURY No.14' Hudswell Clarke D1012 of 1956 preserved in the car park at the Cadbury World part of the Bournville factory. The locomotive had arrived from Premier Brands UK Ltd, Moreton, Merseyside in February 2007. It had formerly been at Cadbury Schweppes, Moreton site.

Two examples of vans formerly owned by Cadbury Brothers Ltd are preserved on the Severn Valley Railway. The information in this Section was kindly provided by Gareth Price who has an interesting web site. at Gareth's home page. 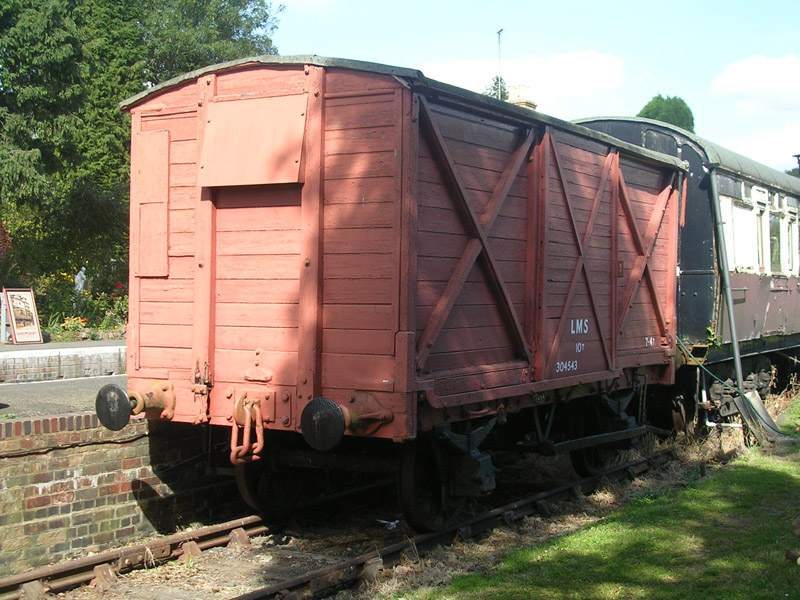 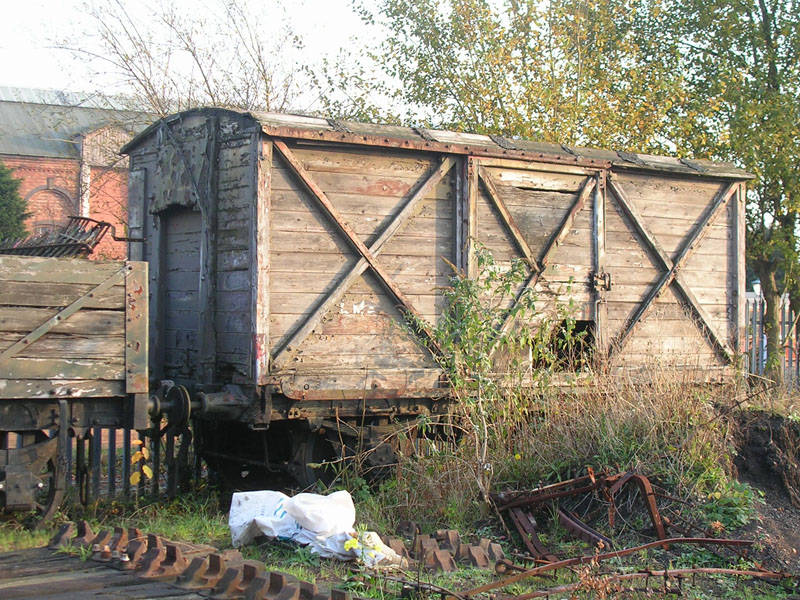 The van in the second photo is ex-Cadburys Van No.278. This van was first numbered 'CR 2080' in Caledonian Railway livery and later it was painted into LMSR livery as No.302080. Several years ago it was moved to Kidderminster where it still resided in 2009 but its running career appears over. There were also two other ex-Caledonian Railways vans that went to the SVR along with these two (268 and 269), but they were both cut down to flat wagons for Engineers use in 1973. Sometime later both were cut up. (Photograph: copyright Gareth Price). 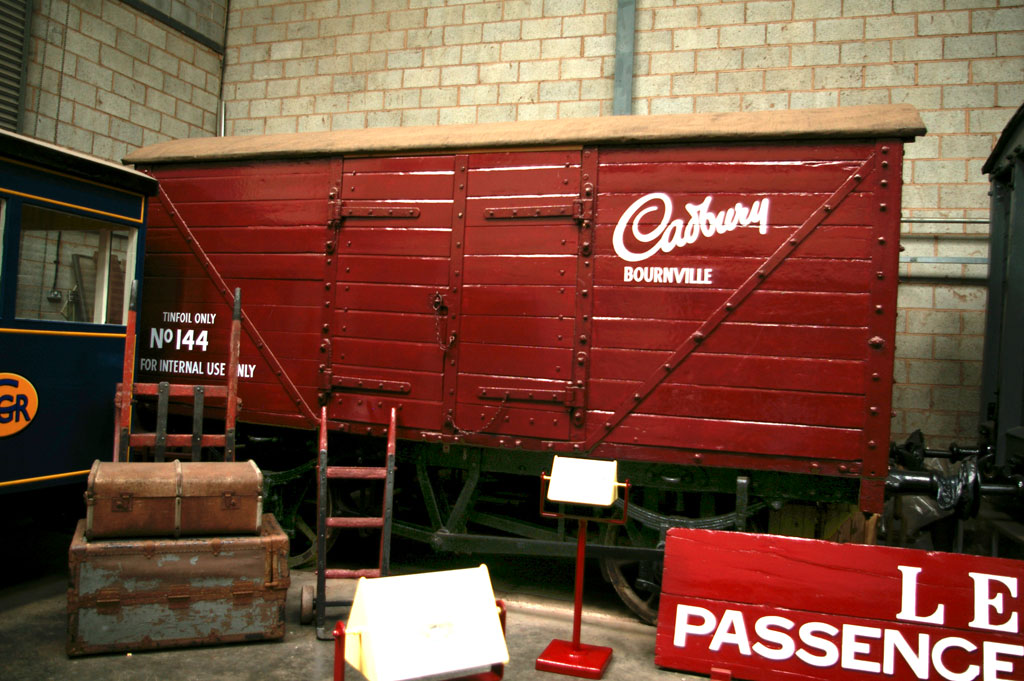 This photograph of Cadbury van No.144 was taken at the Chasewater Light Railway on 17th July 2010. The photograph is the copyright of Roger Lamb.