No.7928 'Wolf Hall' entering Worcester Shrub Hill Station on a gloomy 5th January 1965. There is a 'Hymek' Type 35 diesel locomotive visible at the locomotive sheds.

Robert's art can be seen at its finest in this atmospheric image of BR Standard 5MT 4-6-0 No.73044 at the head of the 16:55 from Stourbridge Junction to Worcester Shrub Hill on 6th February 1965. The locomotive was built in 1953 and withdrawn from Oxford shed shortly after this photograph was taken.

Robert was on hand to photograph an immaculate 'Clun Castle' (No.7029) on rail tour duty on 27th March 1965. Another image of No.7029 on the same day appears in Michael Dowtry's book 'Vanishing Points' with the locomotive displaying an 'Ian Allan Rail Tour' headboard.

This is ex-GWR 0-6-0 Pannier Tank No.3682 light engine at Worcester. The buildings in the background are part of Worcester Gasworks. This photograph was taken on 2nd November 1965. 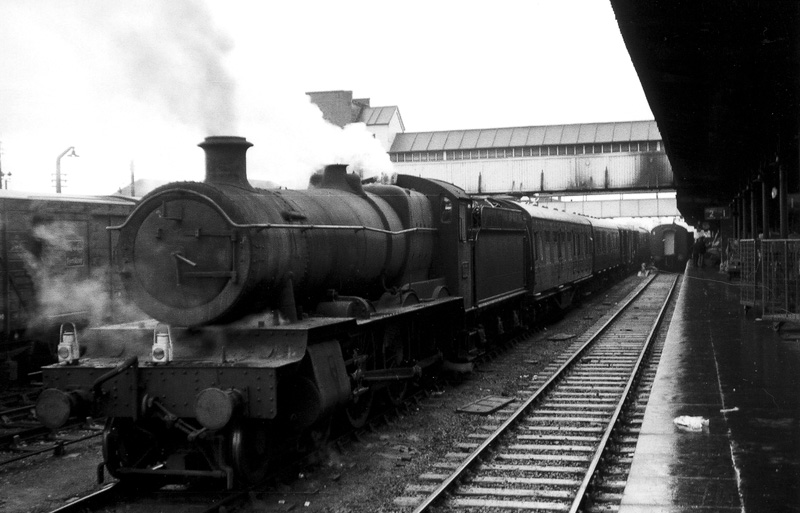 This photograph is a reminder of how gloomy the last days of steam were at Worcester as "Grange" class 4-6-0 No.6872 formerly 'Crawley Grange' stands in one of the centre roads at Shrub Hill with the 09:20 parcels train to Hereford on 11th December 1965.