Just when you might have thought everything had settled down a bit the powers that be threw another spanner in the works. Exit stage left 'Centro', enter the new star 'Network West Midlands' or even 'network west midlands'. 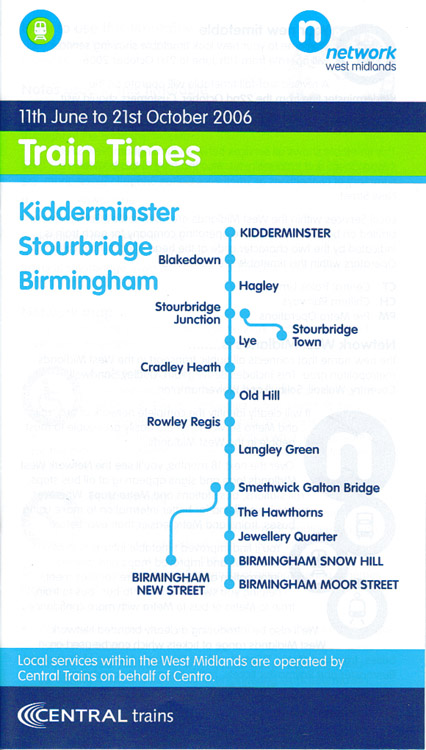 This is an example of 'Network West Midlands' in print. It comprises of a blue circle with a green one inside it and an outline of a train. Not content with one new logo there is another top right with the same blue circle and the letter 'n' inside of it accompanied by the words 'network west midlands'. There is also the 'Central Trains' logo and a mention of Centro also.

Inside half of a page is devoted to explaining to the bewildered public that 'Network West Midlands' (no longer in italics or lower case) is the new name that connects all public transport in the West Midlands Metropolitan area. Surely this was the same paragraph used in 1990 to explain all about Centro when that was launched in 1990? If Centro is no more than why is it mentioned on the front cover and more worryingly on all of the Centro livery trains? Go on a bit further in the book and you'll find that you can still buy a 'Centrocard'. Still confused - then try the map on the inside rear cover. This shows lines in an area bounded by Shrewsbury, Stafford, Tamworth, Northampton, Leamington Spa, Stratford-upon-Avon, Redditch and Hereford with the helpful (?) note that 'A Penalty Fare scheme operates within the Centro supported area (West Midlands county)' or do they mean 'West Midlands Metropolitan area' or is it the same thing?

Seriously though this initiative is described as 'a partnership between Centro and all of the bus, rail and tram operating companies'. So now you know. See www.networkwestmidlands.com

Once up a time the word came down from Westminster on tablets of stone. The tablets were called the 1968 Transport Act and they were all about creating an 'Integrated Transport' system where ticketing would be simple, bus and rail interchange easy and where the days were be filled with endless sunshine. And so the West Midlands Passenger Transport Executive (WMPTE) was born from the ashes of the various local councils' bus services. The new wise men set about their new task with enthusiasm and in November 1971 the WMPTE published a 'Development Plan for the West Midlands' showing how the vision was to be realised. Good things started to happen - new buses, new signs, bus services that ran where the people wanted them to run, and trains that were clean and ran to time. And the people wanted more of this thing they called 'Integrated Transport' and so they got more. What they got was called 'Travelcard'. It was a simple season ticket which came in a few easily understood flavours - such as bus only, bus and local rail, weekly, four-weekly, adult and child.

But the people still thought it was all being done by the 'Corporation Buses' so the men in glasses had another think and came up with 'Wumpty'. He was a loveable and huggable person and everybody saw that it was good. Wumpty was no abstract designers concept - even having a seat at the Boardroom table as seen below. 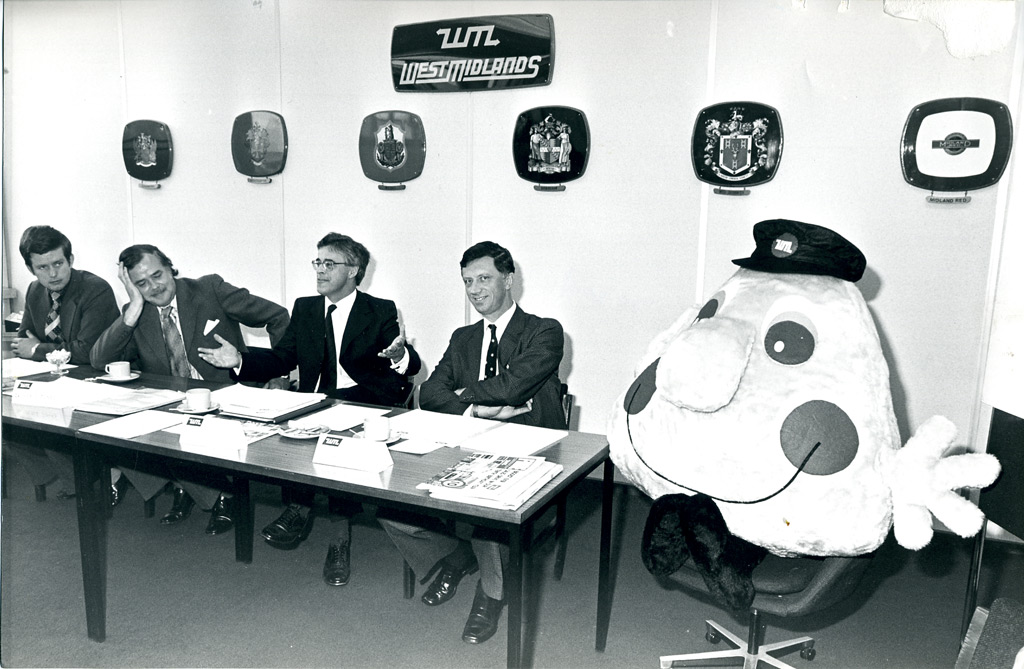 But by 1985 the wicked witch of Whitehall was not amused. She said it was not right to give the people what they wanted. Buses and trains were for the lower classes and henceforth they would have to be content with cake from her shop. Did the people not know that the car was king and the bus and train no better than the dinosaur. The private sector would do it all and for free at that. Poor old Wumpty was pensioned off but even the wicked witch knew it would take some time for the private boys to get up to speed so WMPTE won a reprieve and the few poor souls who remained were told to prepare for their own demise with a period of anything from 'seven days to seven years'. But the seven years came and went, integrated transport was dead, the transport system including the ticketing system was in chaos. The WMPTE people rose to the challenge and a new star was born and it was called 'Centro'. Soon people started to notice that the trains were just that bit brighter, the bus shelters were repainted and vitally the beloved 'Travelcard' now had an identity - Centrocard was born.

All did not stay like this for very long as a new tougher breed of people entered the fray and decreed that Centro was so 20th century; not for the them the bright yellow and green of Centro or the Blue of WMPTE, no they wanted network West Midlands.

By 2010 the trains had been repainted and signed and the stations but all was not well in the network West Midlands camp. In August 2010 no less than three guides were available in Birmingham New Station explaining how to but your ticket. Now in Switzerland it is simple. There are point to point tickets, a return journey is two times a single and First class is 50% more. Various discounts are available including a 'Half Fare card'. All simple and easy so why do network West Midlands need three printed guides?

The first one looked promising as it says what it is for on the front 'Bus, Train and Metro Ticket Guide' with the logo subtly placed at the bottom right and rather a nice photograph outside Moor Street Station. Thing start to go wrong in the first paragraph of text - 'This guide provides a comprehensive summary of bus, rail and Metro tickets for the Network West Midlands area (West Midlands metropolitan area)'. So how do you know if you live or work in the 'West Midlands metropolitan area?. Well there is a handy? map across pages 20 and 21 of the guide but this needs a magnifying glass to read and shows only what it describes as the 'Zonal network for West Midlands cities and region'. Not a lot of use to man nor beast and what on earth is the 'West Midlands region' - what counties does that cover.

Our first ticket an 'network one day' ticket giving unlimited travel in the network West Midlands area. Assuming for a minute we know what constitutes the West Midlands metropolitan area we then find out that 15 villages such as Rubery, Kinver and Keresley are deemed part of the area as well. But so far so good.

On the next page are no less than 37 differently priced options which require you first to get to grips with the concept of the 'Rail Zone' for which presumably you need access to the previously mentioned magnifying glass. One of the options is a '4 week First Plus Add-On to yor (sic) ticket’. Confused yet - you soon will be and don't forget to read the even smaller print - ' Zones 1-2 nnetwork not valid on Metro'.

How about an 'Add-on ticket'. This lists a lot of stations and gives prices. Here you will need a calculator as you have to add the figures listed here to those mentioned previously.

Then follow 28 prices for 'ntrain' tickets - what most people would call a 'train season ticket' folllowed by a pages of 'nntrain out of county' tickets (which county?). There's even for some unknown reason an 'Out of County Direct ticket'.

The mind suitably numbed you later get the chance to apply for a direct Debit for your network West Midlands ticket and yes you guessed - the scheme is operated by good old Centro. You can find out more on the Network West Midlands web site but if you want to send them an email then you have to email directdebit@centro.org.uk.

If you've read the other guide you know what to expect of this one with a few handy little 'extras'. If you lose you season ticket as children do all the time you might as well forget about obtaining a replacement. If you buy an 'nnetwork' or 'ntrain' ticket by direct debit you can get a replacement and might or might not get further replacements from Centro. If you buy an 'nbus' some oddly named body called 'WM Card Systems' might do the same. If you've paid cash for a paper ticket they might or might not replace it but fear not because those nice people at Centro will sell you 'Centrocare' and then they will replace it and you might or might not be able to replace an 'ntain' child ticket at a railway station for £10.

The guide even tells you who is paying the other half of the fare - a body known as the 'West Midlands Integrated Transport Authority'. Is this yet another identity for the good old WMPTE perhaps?

Oh and yet another body with a logo - 'traveline public transport info' but as you have to pay 10p a minute to speak to them. If you want to speak to the Centro Hotline people for free then use 0121 200 2700 but you won't find that number anywhere in these guides.

There's yet another guide telling you in a roundabout way how to pay by Direct Debit.

Were there any outstanding bargains here. Perhaps - because if you lived in Coventry and work in Birmingham or Wolverhampton you could get unlimited first class travel by any train for just £987 per annum.