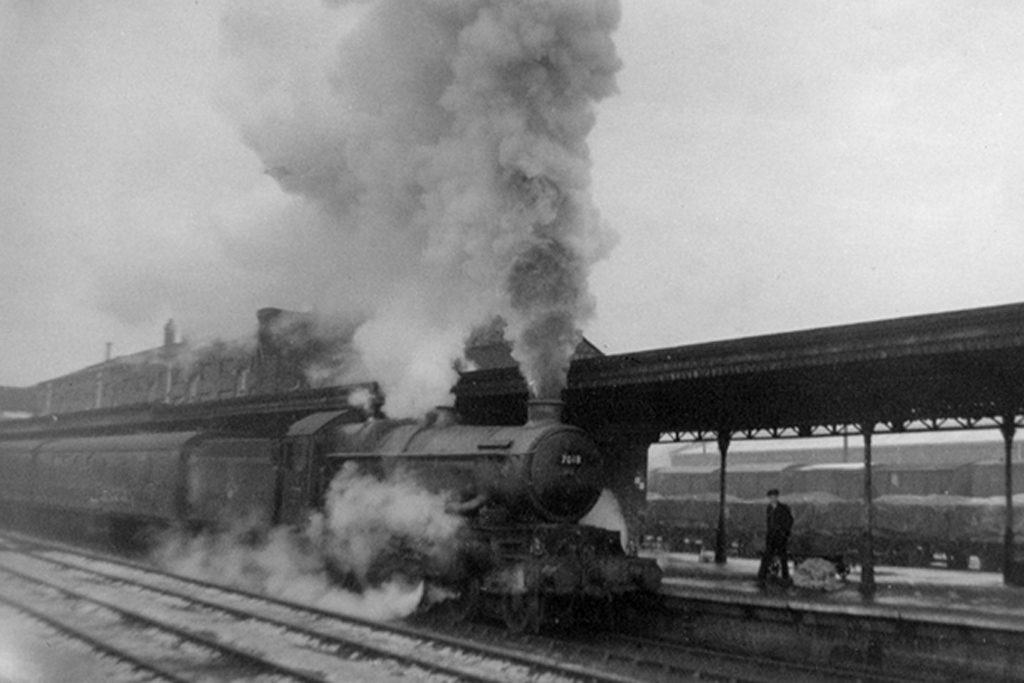 The winter of 1962/63 proved to be one of the worst on record with appalling conditions being experienced across the county that caused major disruption to train services but which proved a welcome distraction for those fortunate to enjoy steam travel from their home in Malvern to the schools in Worcester. On a typically grim day on 5th January 1963 Tony Hoskins was at Worcester Shrub Hill Station where ex-GWR 'Castle' class 4-6-0 No.7018 'Drysllwyn Castle' (of Old Oak Common shed) was seen at the head of what appears to be a 'up' London express train. Tony adds that this photograph lay unloved inside the cover of another stored book until January 2011 when it was rediscovered. The plight of the crew who had to work on steam locomotives in these grim conditions can only be imagined.

The other Drysllwyn Castle is a ruin near Llandeilo in Carmarthenshire, Wales.

Once diesel hydraulic 'Hymek' (class 35) locomotives started crew training at Worcester in 1963, it was obvious that the days of the 4-6-0 'Castle' class steam locomotives working the express passenger trains from Worcester to Paddington were approaching an end.

The last scheduled 'Castle' class train was officially announced and No.7023 'Penrice Castle' was selected to haul the final train from Worcester to London. The photograph below shows No.7023 before working that final train, the 11:10am to London on Saturday 7th September 1963. 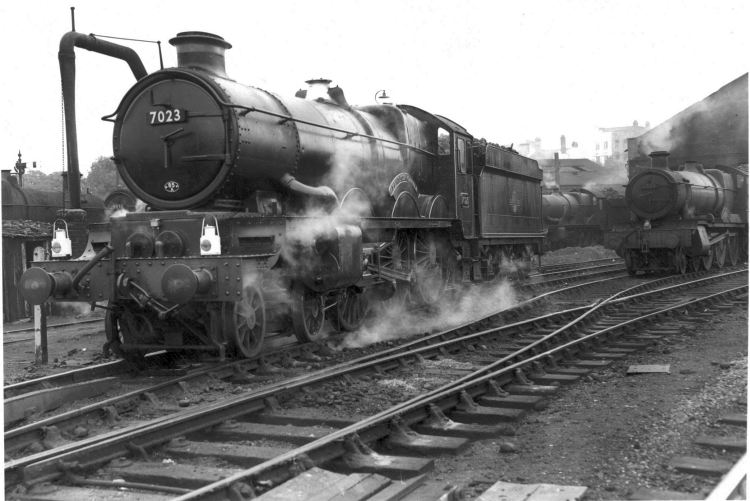 The photograph which is published by courtesy of the Worcester Evening News is taken at the exit from the 'passenger' shed at Worcester and obviously has some official support as such a location would have been 'out of bounds' to an ordinary enthusiast. The choice of 'Penrice' for this final train was perhaps unexpected as lifelong Worcester engine No.7005 'Sir Edward Elgar' would have been the obvious choice but perhaps the former engine was in better mechanical condition and the authorities did not want to risk the embarrassment of a steamer breaking down on the way to London.

The 'Hymek' diesels proved to be unreliable replacements at Worcester and ‘Castles’ made numerous appearances during the reminder of 1963. Just when things seemed to getting back on track the 'Hymeks' suddenly disappeared and steam returned to all London trains.

After the 'final' trip, 'Penrice Castle' was placed in store at the rear of the 'goods' shed at Worcester. Just before Christmas 1963, she returned to traffic and was in service at Worcester on main line duties until the following June when the disgraced diesels finally returned for good. 'Penrice' survived a little longer at Oxley (Wolverhampton) shed and continued to visit Worcester from time to time until withdrawn at the end of January 1965. The last time members of the MIAC saw her was on shed at Oxley on Sunday 24th January 1965 shorn of nameplates, she was in steam but looked very forlorn. Interesting No.7023 was the third 'Penrice Castle', the first was No.5057 until that was renamed 'Earl Waldegrave' in 1937. The name was transferred to No.5081 but that lasted only until 1941 when No.5081 became 'Lockheed Hudson'. 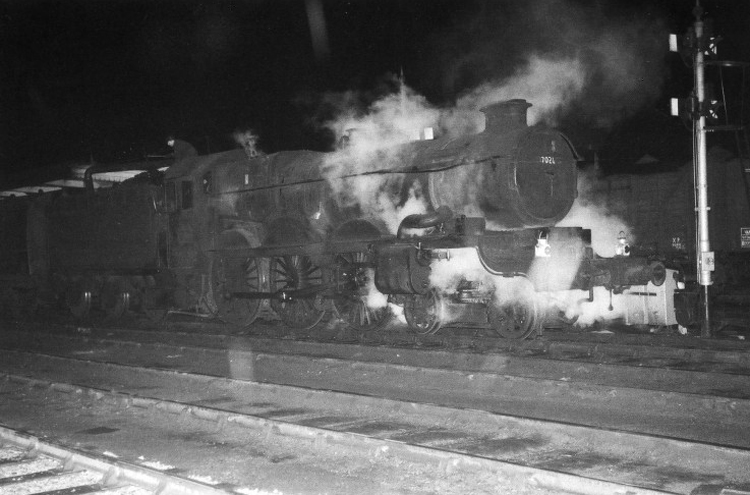 This is a rare photograph of No.7024 'Powis Castle' taken at Worcester Shrub Hill Station on Sunday 10th January 1965. The locomotive has just arrived with the 00:07 Sundays only from Manchester to Plymouth. This train which was steam hauled between Wolverhampton and Bristol was the last scheduled passenger working for a 'Castle' class locomotive. No.7024 was built in 1949 and was based at Oxley (Wolverhampton) from September 1963 until withdrawn in February 1965, shortly after this photograph was taken. Photograph taken by Robert Pritchard. 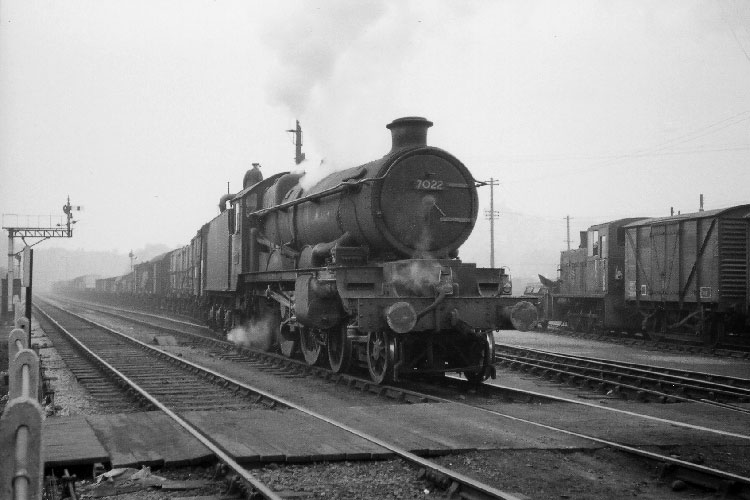 "Castle Class" No.7022 "Hereford Castle" in run down condition is awaiting departure to Gloucester from Worcester freight yards on a freight train on a rather bleak day in February 1965. The engine was based at Gloucester shed and withdrawn in June 1965. An unidentified Class 03 diesel shunter is seen on the right. Photograph taken by Robert Pritchard. 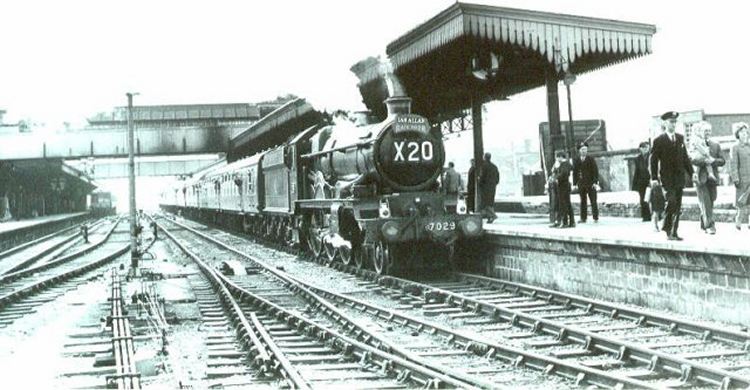 This photograph taken by Robert Pritchard shows 'Castle' class locomotive No.7029 'Clun Castle' at Worcester Shrub Hill station with an 'Ian Allan' special on 27th March 1965. "Clun Castle" was allocated to Gloucester and was the last surviving member of its class in B.R. service when withdrawn at the end of 1965. 'Clun Castle' has been preserved.