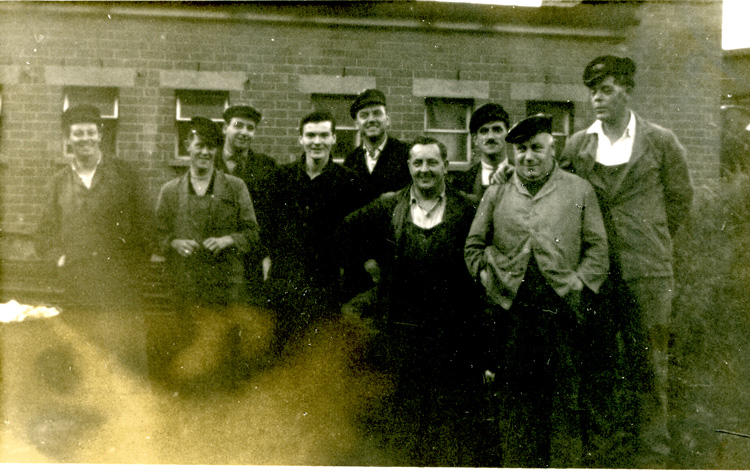 This old photograph of some of the staff at Worcester Engine Sheds comes from the collection of Mick Rock and was taken 'sometime in 1963'.

”I too have photographs of the old days at Worcester Loco, including the cleaning gang of 1962 featuring Fred Jones, the Chargehand Cleaner. Fred was a real gentleman of the old school and a nice person, who had to act out of character at times and treat us mischievous cleaners with a firm hand. Fred was so well known that a site featuring 85A is not complete without any reference being made to him. Other names I can remember are; Fred Bennett, Sid Neil and Noel ??????, Running Foremen; Harry Cureton, Shedmaster; Hugh Lamore, Roster Clerk; “Plonker” Pugh, Shedman (sorry about the nickname but I don't think anyone knew his christian name): Tony ?????, the Italian Fire dropper; Fred Potter, Boilersmith, and many engine crew. Aaaagh, I can see the faces....but the names won't come.”

My father was a train driver based at Worcester with nearly fifty years on the railway at Worcester.

He has shown some of these photo's to some of his retired colleagues and they are working on trying to put names to faces. One of the photo's is of staff outside the "Enginemen's Cabin"in 1963 they are:

In Chris Harris comments there is mention of Noel ?????? his name is Noel Higgins, Plonker Pugh is remembered but only as Plonker his christian name is still unknown as is Tony the Italian fire dropper, but if I find out I will let you know! Hope this of some use. (Thanks Chris - this seems to fill in the gaps in the photo above - ACS).