Two hundred and fifty (250) Standard class 9F 2-10-0 (Nos.92001-92250) heavy freight steam locomotives were built by British Railways between 1954 and 1960. No.92220, which was built at Swindon Works, was named 'Evening Star' in recognition of it being the last steam locomotive built by British Railways. Many locomotives of this class were allocated to the Western Region and they were frequent visitors to the county.

For many years No.92079 was the regular banking engine at Bromsgrove and others of the same class were sometimes used as Lickey Bankers. No.92230 of Gloucester Shed was withdrawn at Worcester on 1st January 1966. No less than nine Class 9Fs, including 'Evening Star' survived the end of steam and British Railways. Two photographs of BR Standard class 9F 2-10-0 steam locomotives in action on freight trains near Worcester.
Above: No.92244 has either come off the ex-Birmingham and Gloucester Railway line at Abbotswood Junction or has come down the Cotswold line via Evesham with a heavy freight train. It is seen passing through Norton Halt in the early 1960s when it was probably allocated to Cardiff East Dock.
Below: No.92247, possibly of Banbury Shed, at speed on the ex-Birmingham and Gloucester Railway line at Abbotswood with a train heading towards Gloucester.
Both photographs taken by Rupert Chambers. 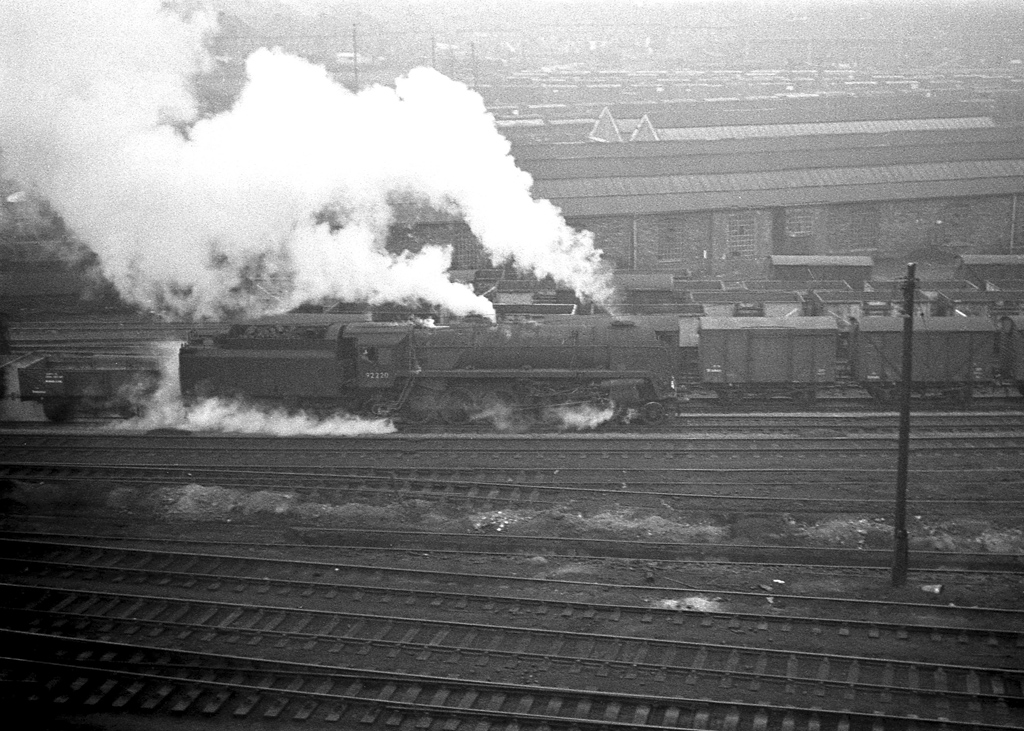 Class 9F No.92220 'Evening Star' entered BR service on 25th March 1960 and one might have thought that as a prestige locomotive and destined for preservation, it would have been allowed to keep its nameplates, but both these and the commemorative plaques were removed around the end of 1964. This photograph was taken from Railway Walk in Worcester on Monday 22nd February 1965, presumably during the school half-term holiday when scholars' season tickets were still valid. The film used by Robert Pritchard was 400 ASA Ilford HP3 at about 1/125 sec. at f3.5. Barely a month later it was withdrawn after only five years in service. It says much about the lack of marketing expertise within BR that as the last built BR steam locomotive it would have been much in demand for special train workings in the final months of steam operation and thus have provided much needed revenue had it survived in service.