Thomas Scaife and Joseph Rutherford were two unfortunate employees of the Birmingham and Gloucester Railway who tragically lost their lives when the boiler on a steam locomotive exploded at Bromsgrove on 10th November 1840. A craftsman was commissioned to produce the impressive grave stones. Unfortunately he drew a 4-2-0 locomotive built by Norris; rather than the correct locomotive which was a 2-2-0 named ‘Surprise’. Something that no doubt today would have resulted in a libel action. Scaife was killed instantly but Rutherford died the following day. 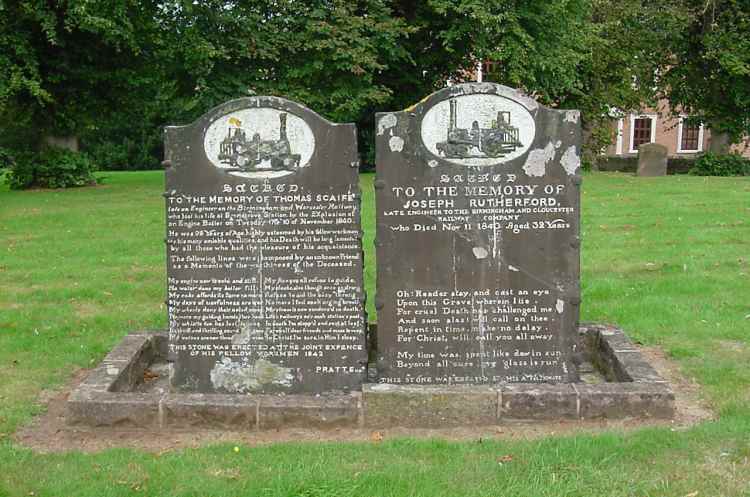 The two graves lie side by side to the south side of the church.

The locomotive that blew up was apparently a one-off locomotive built by a Dr William Church of Birmingham., the boiler being built by a Mr Horton of Brierley Hill. The engine which was named 'Surprise' was owned by a Mr S.A. Goddard and was at Bromsgrove for trials. 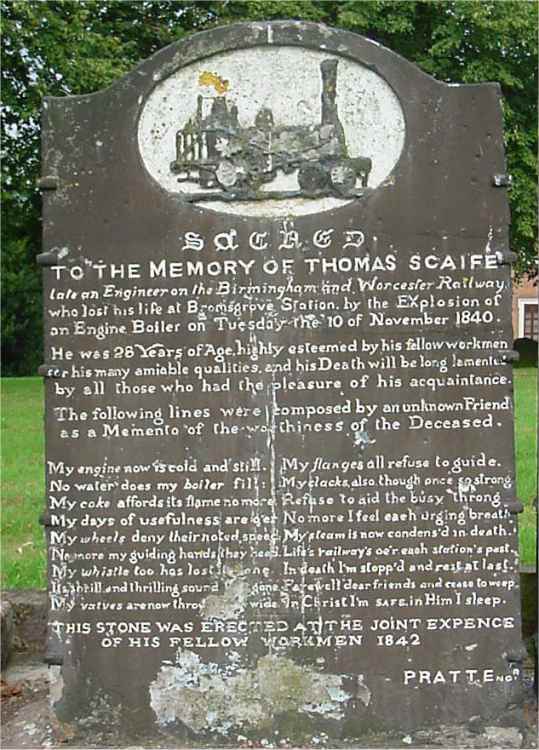 The text of the poem reads:

My engine now is cold and still

No water does my boiler fill

My coke affords its flame no more

My days of usefulness are o'er

My wheels deny their noted speed

No more my guiding hands they heed

My whistle too has lost its tone

Its shrill and thrilling sounds are gone

My flanges all refuse to guide

My clacks also, through once so strong

Refuse to aide the busy throng

No more I feel each urging breath

My steam is now condens'd in death

Life's railway's oe'r each station's past

In death I'm stopp'd and rest at last

In Christ I'm safe in Him I sleep

(NOTE: some words are in italics and the end of line puncuation is excluded.) 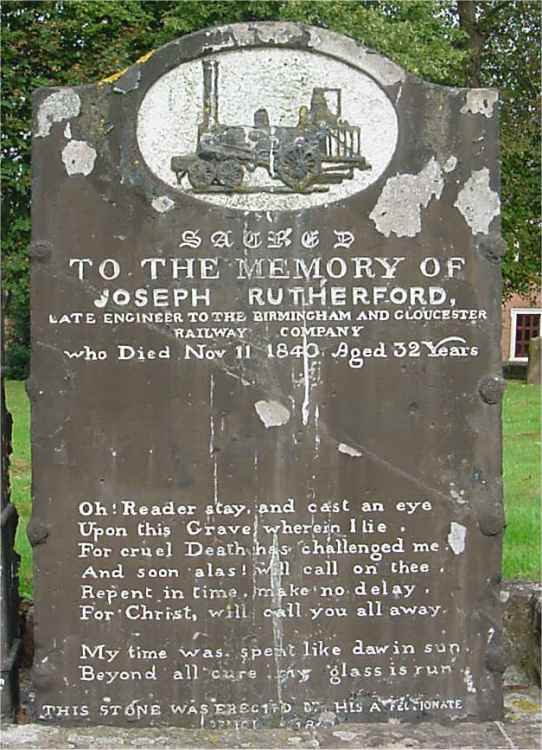 Upon this Grave wherein I lie

For cruel death has challenged me

And soon alas! will call on thee.

Repent in time, make no delay

For Christ, will call you all away

Beyond all cure my glass is run

(*) Not ‘daw’ as it rather meaninglessly now reads

(NOTE excludes the end of line punctuation is excluded.)

The Railway Magazine of October 1951 reported that Scaife's gravestone had been damaged by vandals on 2nd March 1951. The memorial broke off at the base and ended up in three pieces. Bromsgrove District Council paid £17 10s 6d to join the three sections with concrete supports and bronze clips.