John Corbett was a native of the Black Country, being born at Brierley Hill in 1817, the son of Joseph, a prominent owner and operator of canal boats.

A biography of John Corbett, 'The Salt King' can be found on this page.

Stoke Prior is a small village to the north-east of Droitwich Spa on the main road from Birmingham to Alcester. Stoke Works is the adjacent village, primarily built by John Corbett to house the salt works employees', slightly to the south of the actual works. Confusingly road signs in the area appear to be interchangeable as between 'Stoke Works' and 'Stoke Prior'. For instance one off Junction five of the M5 refers to 'Stoke Works' but if you take this road the sign at the start of Stoke Works village refers to it as being Stoke Prior. Old Ordnance Survey maps do not mention Stoke Works at all. To avoid the obvious confusion the salt works is referred to in this site by the title 'Stoke Prior salt works'.

There were already a number of salt works in Droitwich when the existence of large quantities of salt in the area around Stoke Prior was confirmed by boring in 1828. In 1830, Fardon, Gossage & Co built a factory on the east side of the Birmingham & Worcester canal (Thomas Fardon had been a salt-maker in Droitwich for some time) for making salt, soda, vitriol and soap. This firm became known as the British Alkali Co from 15th October 1835 when other entrepreneurs including Francis Rufford joined the venture. The British Alkali Co factories were built on eight acres of land at Stoke Prior known as 'Lower Leasow' that had been purchased from the Dean and Chapter of Worcester.

In 1825, William Furnival began to mine salt on the west side of the canal on behalf of the British Rock And Patent Salt Company. The site was subsequently purchased by Matthew Macalister (1828) and then by Alexander Reid (1830) who employed Richard Parker as manager to establish a salt-making factory. This business became the newly-formed Imperial Salt & Alkali Co in 1835.

Both of these salt works appear to have been profitable ventures and by 1840 they employed about 200 workers throughout the early 1840's however it is doubtful whether much salt was ever produced by these companies with sources suggesting the main products were soap and various alkalis. The 1848 Tithe map shows the British Alkali Co to cover about 8 acres, the Imperial Salt and Alkali Co about 6 acres and the Imperial Salt and Chemical Co (occupied by Peter Constable) about 1 acre.

However by about 1850 these ventures had fallen on bad times and the works were practically abandoned. In 1851 the Imperial Salt and Alkali Co's works were offered for sale at the Auction Mart, London. The bill of sale shows three parts to the works:

1. Saltworks (in the southernmost part of the factory) with 31 pans , brine tanks, drying stoves and warehouses.

Middlemass & Hunt state that the works were sold to a John Scott (for £15,550) and from him, in 1856, to Frank Clark Hills, a manufacturing chemist from Kent.

It is quite possible that it is through the canal boat business that John Corbett became acquainted with and an agent for the British Alkali Co. Certainly at that time canal transport would have been a most efficient means of transporting the products from

Stoke Prior. By the 1850's canal transport was finding it increasingly difficult to compete with the railways and the Corbett's duly sold the business.

On 6th July 1853, John Corbett concluded three agreements in the District Bankruptcy Court. Firstly he purchased from Francis Rufford and others the copyhold (a form of landholding peculiar to manors) of part of the site (called 'The Cottage') at Stoke Prior at a cost of £1,065 with access to this site effective from 14th October 1853. Secondly he agreed to purchase, on 5th December 1855, from the Trustees of the British Alkali Co a further piece of copyhold land at Stoke Prior for £1,490 (11 acres of land per Middlemass & Hunt). (The third agreement was to purchase a warehouse on the canal at Gloucester).

Middlemass & Hunt state that Corbett also obtained from Frank Clark Hills, from December 1857, a 21 year lease at a rental of £1,000 per annum of the former Imperial Salt and Alkali Company's works on the opposite bank of the canal. Corbett exercised an option to purchase this site for £25,000 in 1867. To finance this acquisition Corbett, on 3rd August 1866, took out a mortgage for £28,200 secured on various properties including his home at 'The Grange'. The mortgage was repaid on 20th December 1880.

Corbett revolutionised the commercial manufacture of salt and created a thriving business. His new production methods rapidly increased output from the works and considerable new works were built on the Imperial Salt part of the works during 1871-2.

The Birmingham and Gloucester Railway, that had opened in 1840, passed close by and initially they provided a railway station just to the south of the two salt works. This station closed to passengers in 1845 but remained in use as a goods depot until it burnt down on 1st April 1929 (per Alf Nicklin). In 1845 the Birmingham and Gloucester Railway obtained an Act of Parliament that amongst other items authorised the construction of a branch railway into the works of the British Alkali Company. At first it seems likely that all shunting was handled by main line engines and horses. As the output of salt increased, John Corbett decided to purchase a new steam locomotive to shunt the wagons and vans in the salt works. However the layout of the works on both sides of the canal rendered it impossible to manage with only one locomotive so a second one was purchased in 1883. John Corbett also purchased over 400 wagons and vans of his own and these were maintained and repaired in his own workshops at Stoke Prior. 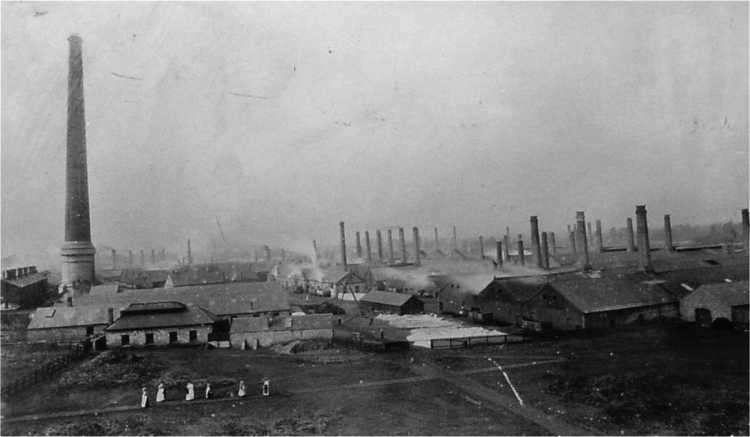 This fascinating photograph that appears here by permission of Droitwich Heritage and Tourist Centre shows the former British Alkali Co part of the Stoke Prior salt works looking from the east. It shows on the left the 'big chimney' that had been erected in 1836 by the British Alkali Co whilst to the right are the chimneys of the salt works. In the middle of the photograph are several railway wagons whilst six women are walking along a footpath in the foreground. The building with the four windows that is situated behind the woman is thought to be the locomotive shed with the wagon works beyond.

John Corbett owned the Stoke Prior Salt Works until 1888 when he sold the whole complex to the Salt Union Ltd along with the three locomotives listed below.

John Corbett chose the most prominent features of the Corbet family coat of arms as names for his locomotives. The first name 'Raven' features on most of Corbett's other assets and survives today in such as 'The Raven Hotel' in Droitwich. The second locomotive was called 'Elephant' . An elephant can be seen as part of a frieze at Morton Corbet castle and a little elephant is part of the John Corbett Coat of Arms.

In addition to the standard gauge railway, contemporary photographs also show narrow gauge lines and skips inside buildings at the works but no other documentary evidence is available. 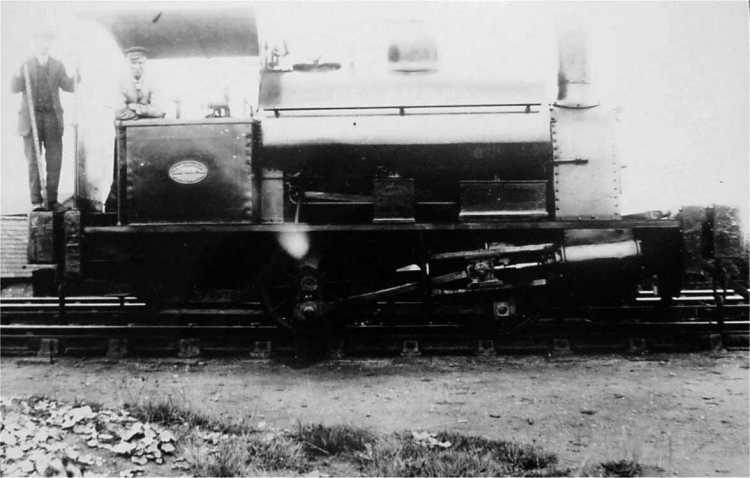 The photograph above that is used by permission of Droitwich Heritage and Tourist Centre is the steam locomotive 'Elephant' (Hawthorn 1965 of 1883). It has not been able to ascertain where and when this photograph was taken however it was appear to show the locomotive when new. It is reasonable to assume that it was commissioned by John Corbett when the locomotives was delivered new to the Stoke Prior salt works in 1883.

For the later history of this works see the entry for the Salt Union Ltd,

'The Mid-Worcestershire Salt Industry' by Alf Nickling, 1970 (by courtesy of Bromsgrove library)

'Stoke Works =Memories of Our Village', by Eunice James-Stainton, 2003.