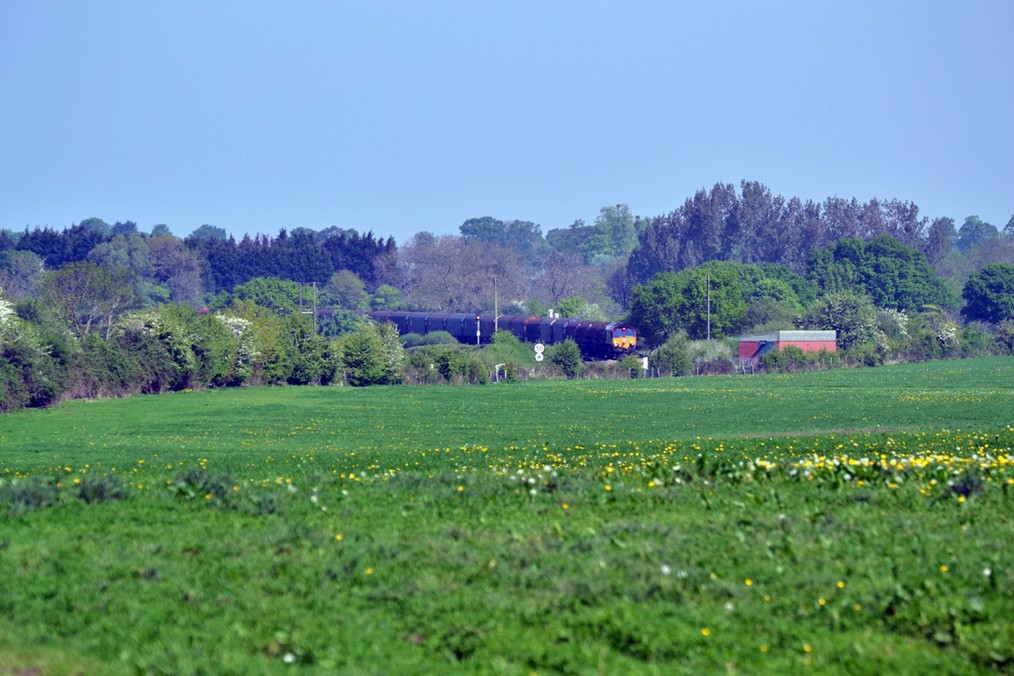 This traffic flow consists of one or two trains per weekday of covered vans.
The first train leaves Margam about 22:00 and arrives at Round Oak before the sun rises. If this train runs it returns to Margam mid-morning as 6V05 09:16 Round Oak to Margam empty covered vans (as on 12th May 2016 with No.66238 as seen at Abbotswood Junction).
There is also a schduled early morning loaded train (6M81) at about 04:45 from Margam to Round Oak loaded covered vans via Worcester Shrub Hill about 09:20. The locomotive from this train returns to Margam from Round Oak with the train code No.6V07 via Worcester Shrub Hill about 15:30. Operated by DB Schenker class 66 diesel locomotives.
Margam to Corby 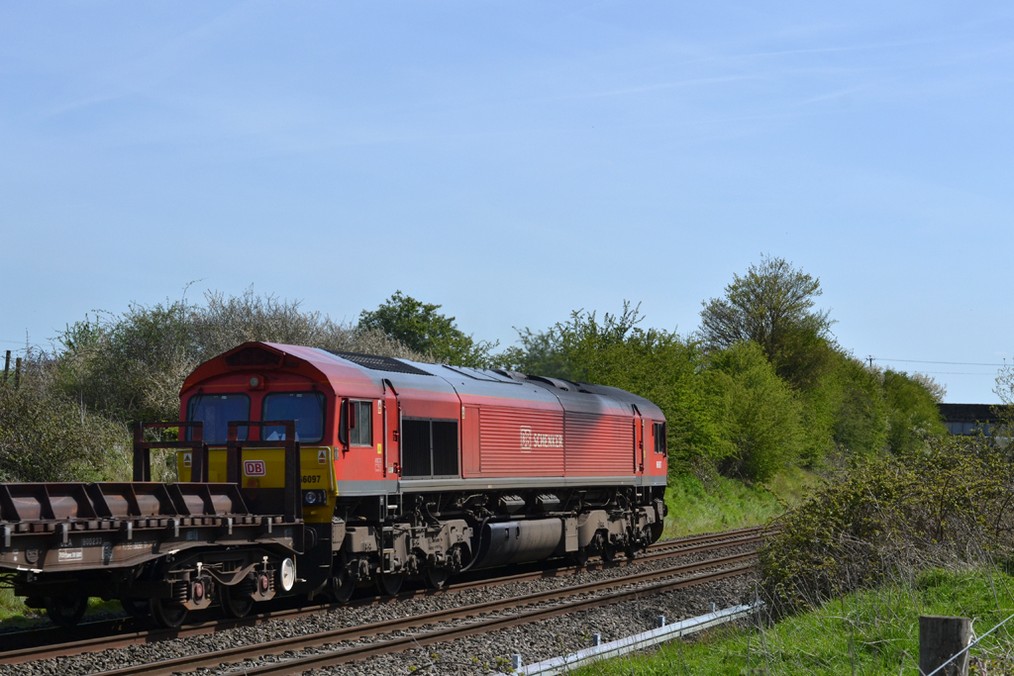 This flow consists of loaded steel coil open wagons from Margam and returning empties. Operated by a DB Schenker class 66 diesel locomotives. There are also overnight balancing workings.
6M96 05:50 Margam to Corby conditional train arrives at Bromsgrove around 10:00 if running. This train is banked up the Lickey Incline.
6V92 10:23 Corby to Margam empty steel wagons. This train passes Bromsgrove just after 14:00 if running. No.66097 was seen at Abbotswood on 4th May 2016.
Daventry to Wentloog Tesco containers train 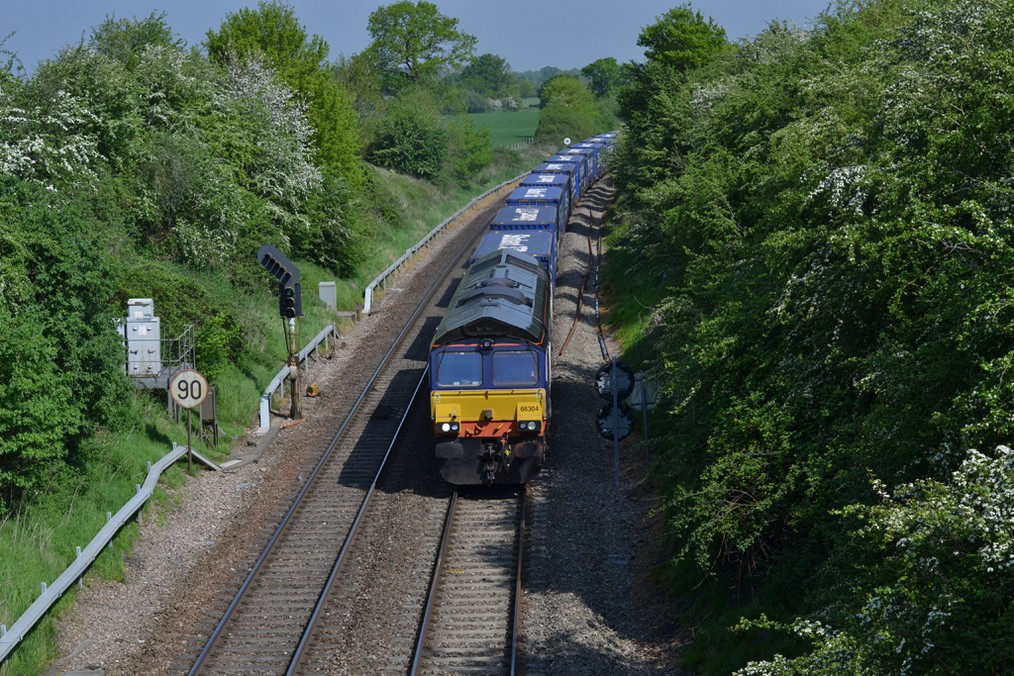 4V38 08:20 from Daventry to Wentloog. This container train service which started operating on 28th February 2012 can be relied upon to run.It normally passes Abbotswood Junction at about 10:15am (on 12th May 2014 No.66304 was on this train) and runs every day except Saturday. Operated by a DRS livery class 66 diesel locomotive. The return working (4V36) passes Abbotswood about 20:45 but on Sundays goes via Worcester.
Stoke Gifford to Rugeley
An occasional flow of loaded wagons of imported coal from Portbury to Rugrlry and return empty wagons.gons. Operated by Freightliner. This trains have ceased.
Westerleigh to Lindsey empty oil tankers
6E41 11:41 Westerleigh to Lindsey empty oil tankers. Operated by DB Schenker using class 60 diesel locomotives. The train passes Bromsgrove about 13:50 if running on its scheduled path. The balancing working 6V98 loaded tanks goes through Worcestershire during the night. 6E41 operates often but irregularly. This train no longer runs..
Other Freight Trains
There are a few other freight trais trains to be seen during the hours of daylight including nuclear flask trains from Berkeley and Plymouth (infrequent) and Bridgwater (operated by DRS) and the New Measurement Train.
Overnight there are quiet a few trains including loaded steel trains from Margam (operated by EWS).
Weekends
There are few freight trains on Saturdays or Sundays. 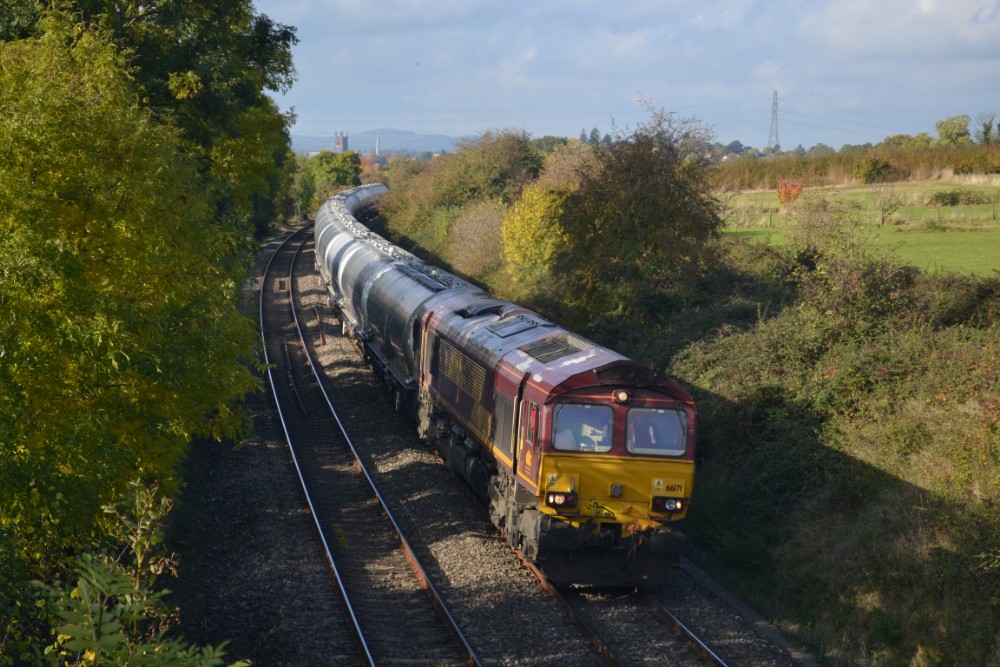 From Tuesday 26th October 2016 for twelve days the line from Bromsgrove to Abbotswood Junction was closed to allow works to be progressed on the extension of electrification from Barnt Green to Bromsgrove, and to commission new signalling equipment.
The weather was grim on the first day and following the collpase of freight traffic the only daylight running freight train diverting via Worcester was the Bescot to Avonmouth Hanson tanks, seen at Norton with DB Cargo class 66 diesel locomotive No.66171 in charge. Photograph taken by Andrew Smith.
Back to content