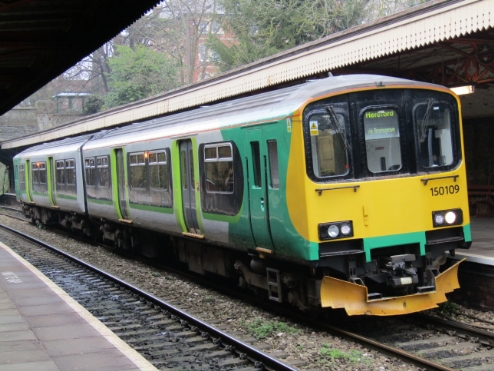 Following the transfer away of the Great Western Railway class 150s only three units could be found working in the County on services from Birmingham New Street to Hereford. One of these three units, No.150109, was photographed by Andrew Smith at Great Malvern Station on Wednesdy 11th April 2018.  The class 150 was working the 14.49 to Hereford (train code No.1V29).
The first half of 2018 saw many changes to services in the county.
Most noticeable was the totally botched introduction of class 800 units to the Cotswold line services. Great Western Railway's introduction of these new units and the removal of all class 180s and, as they came off lease, the class 43 HSTs caused dozens of train cancellations reminiscent of the problems caused in 1963/64 by the changeover from steam to diesel and the later replacement of the Hymeks by underpowered class 31 diesel electric locomotives.
The two-hourly south coast to Malvern trains also saw frequent cancellations and failure of services to reach Great Malvern.
Widespread calls from passengers and others for the franchisee to be removed met with stony silence from the authorities, no doubt mindful of the re-nationalisation (again) of the East Cost franchise.
Elsewhere the continued decline of freight traffic reduced the daytime photograph possibilities to the Round Oak and Corby to Margam and Daventry to Wentloog trains.  All these trains were southbound. No daytime northbound freight trains rans except for nuclear waste trains.
On a brighter note the new train station at Broadway was opened.  To celebrate the event to CLPG organised a special service.
The period also saw major engineering works in the county. Most notably there was a total blockade of the line at Norton to allow Network Rail's contractors to move a new bridge into place over a proposed dual carriageway by-pass.  Sadly the opportunity to reintroduce two line working between Rainbow Hill Junction and Henwick was missed. 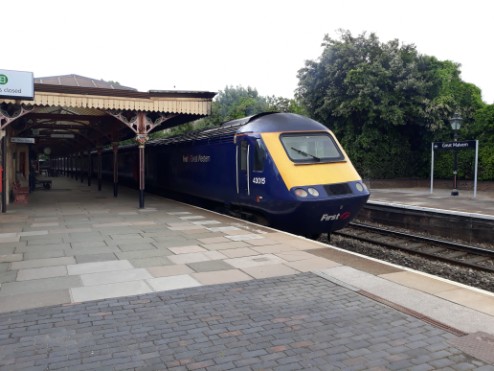 As reported above most services on the Cotswold line remained in the hands of HST 125 trains with their class 43 power cars as seen in this photograph taken by Andrew Smith at Great Malvern Station on Monday 18th June 2018. The photograph depicts class 43 power car No.43015 at the rear of the 15.14 Hereford to Paddington service (train code No.1P39).
July 2018 was perhaps not the best choice to travel away from the County as no trains operated beyond Hanborough because of major works at Oxford. The only feasible option was to travel to Birmingham and change there for London.  A truncated service operated to and from Hanborough.  This picture was taken by Andrew Smith on Thursday 19th July 2018 at Worcester Shrub Hill Station and shows five-car class 800 multiple unit No.800036 with the 09.00 to Great Malvern (train code No.2Z21). Unusually this train did not stop at Foregate Street or Malvern Link. 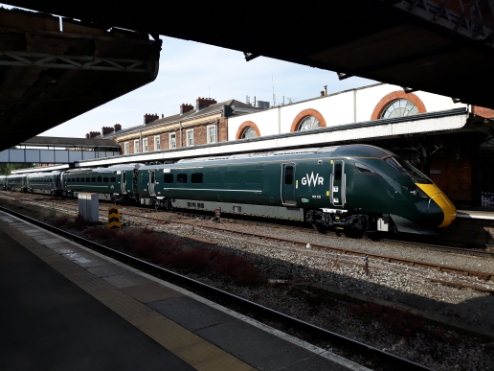 Monday 30th July 2018 is a day to be remembered for the people of Bromsgrove as from then West Midlands Railway started to operate a half-hourly service to Longbridge and on the Cross-City line to Birmingham New Street.  This video taken by Steve Smith, shows No.323201 at Blackwell shortly after climbling the Lickey Incline.
Whilst this was good news for some it comes with a sting in the tail for others as the morning/afternoon peak Cross Country services that provided a direct connection to/from Ashchurch, Cheltenham and Gloucester ceased to stop at Bromsgrove, effectivelly removing the opportunity to travel for those passengers.  This action by the rail authorities will not help to make Worcester Parkway a success as it also removes any chance of going from there to Bromsgrove.
By August almost all of the Great Western Railway services from the South Coast to Great Malvern and return had been taken over by a motley assortment of poor-quality class 165s that had been decanted from London area suburban services.  A more inappropriate type of diesel multiple unit for these long-distance services is difficult to imagine. By the end of the month just about the only service to continue using class 158s was the 07.23 (Saturdays only) from Warminster (train code No.2E27) (returning as train code No.1O99, 10.57 to Brighton).  It is seen here after arriving at right time at Great Malvern on Saturday 25th August 2018.  The return service lost time en-route but the superiority of the class over the 165s allowed an early arrival at Brighton - a rare occurrence in a week when numerous trains on these services failed to reach Great Malvern at all.  How much longer this shameful situation is allowed to continue remains a matter for conjecture. 158s can sometimes be found on this service during Monday to Friday. Photograph taken by Andrew Smith. 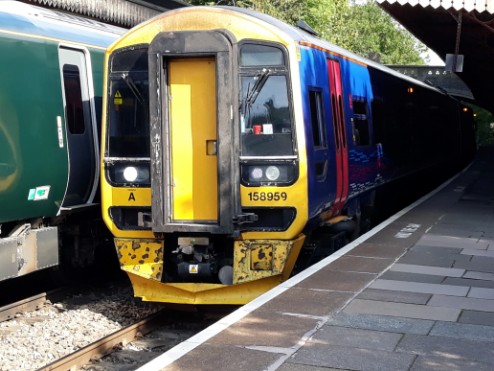 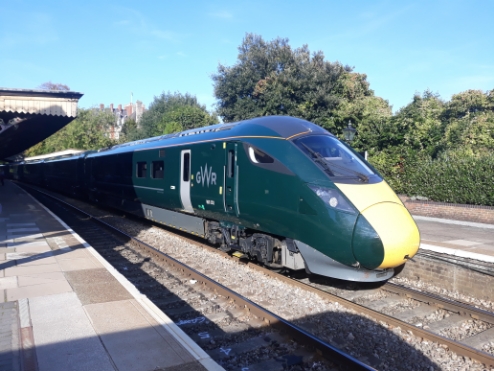 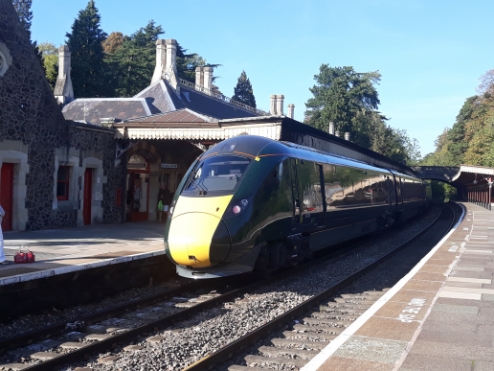 Above: The rapid transition from class 43 'HST's to class 800 multiple units neatly highlighted in these two views taken at a sunny Great Malvern Station on Saturday 29th September 2018. No.800005 had charge of the 13.22 from Paddington to Great Malvern (train code No.1W37) whilst (left) sister unit No.800002 had the 15.13 from Hereford to Paddington.
Below: The new livery for the West Midlands Railway class 170/5 diesel multiple units seen to good effort on No.170516 (with No.170502 also in new livery) on the 14.50 from Birmingham New Street to Hereford. 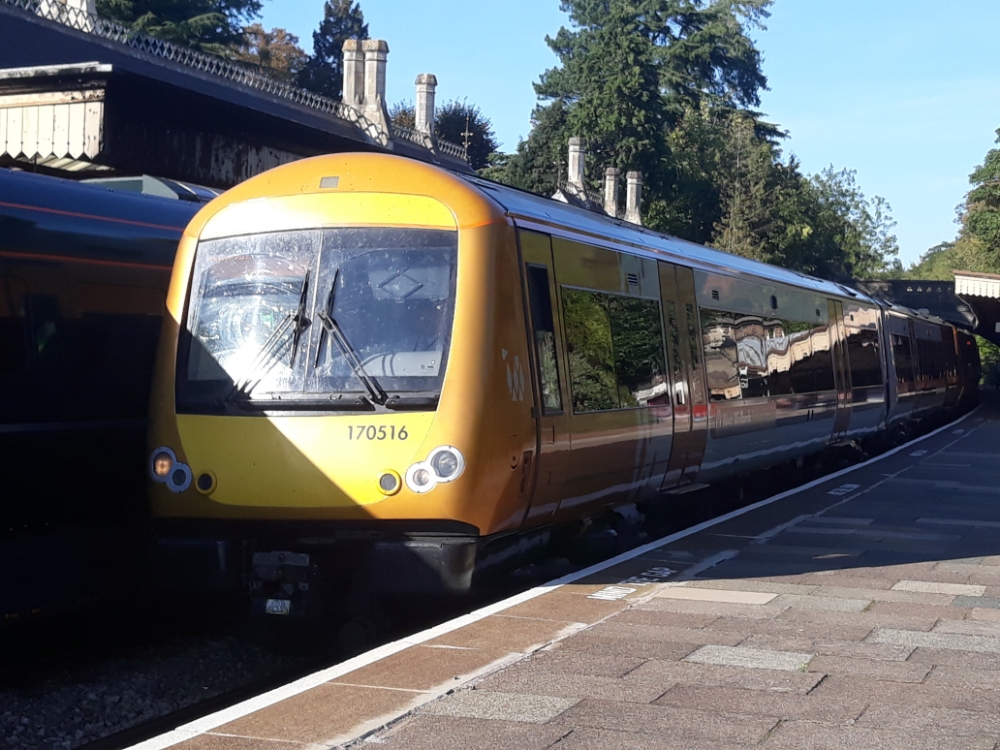 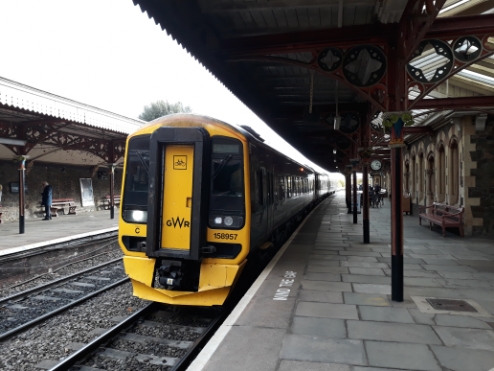