Kidderminster Town (Severn Valley Railway) Station was built by the Severn Valley Railway on part of the site of the disused Kidderminster Goods Depot. It was opened on 30th July 1984. In addition to a two-road station the site also houses the Coalyard Miniature Railway and a museum. Just to the south of the station is a large carriage depot and many items of railway rolling stock can be found here. 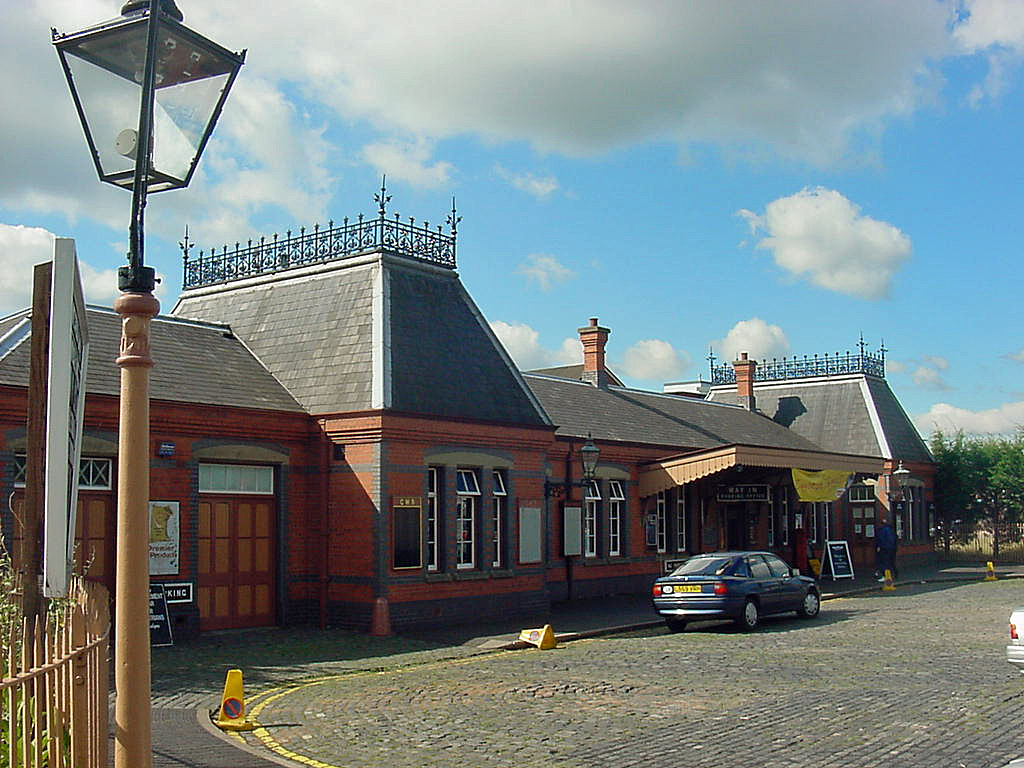 The front of Kidderminster Town Station as seen from the approach road that it shares with the main line station. Photograph taken by Andrew Smith on 4th September 2001. 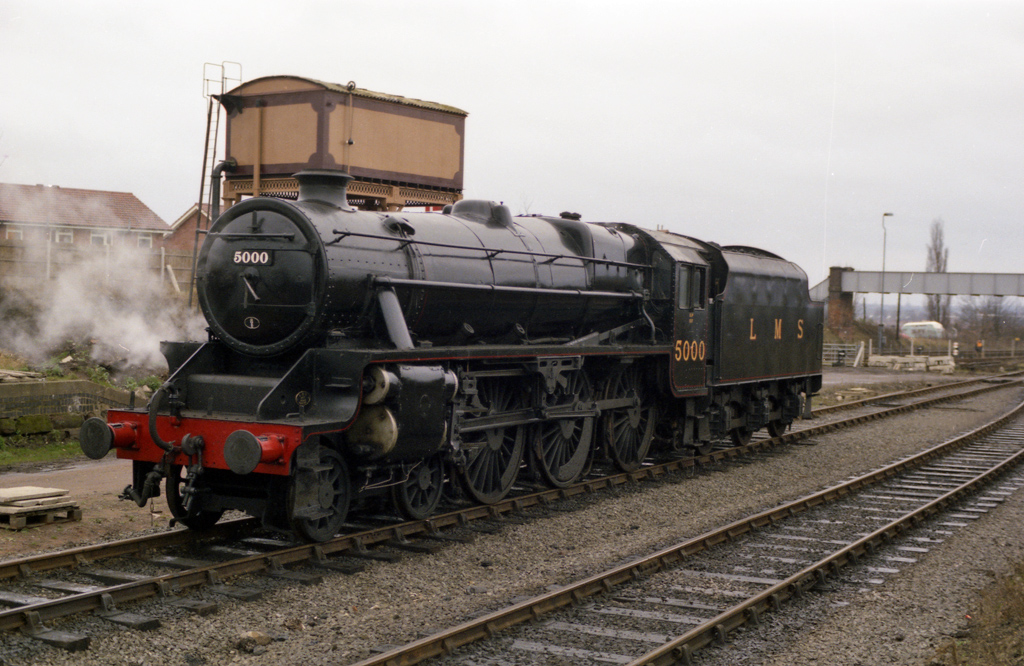 Ex-LMSR Stanier class 5 4-6-0 steam locomotive No.5000 (ex-BR No.45000) sporting an 8C shed plate on its smokebox door waits for the arrival of the stock for a 'Santa Special' train which it will take Arley. Photograph taken by Andrew Smith on 15th December 1985. 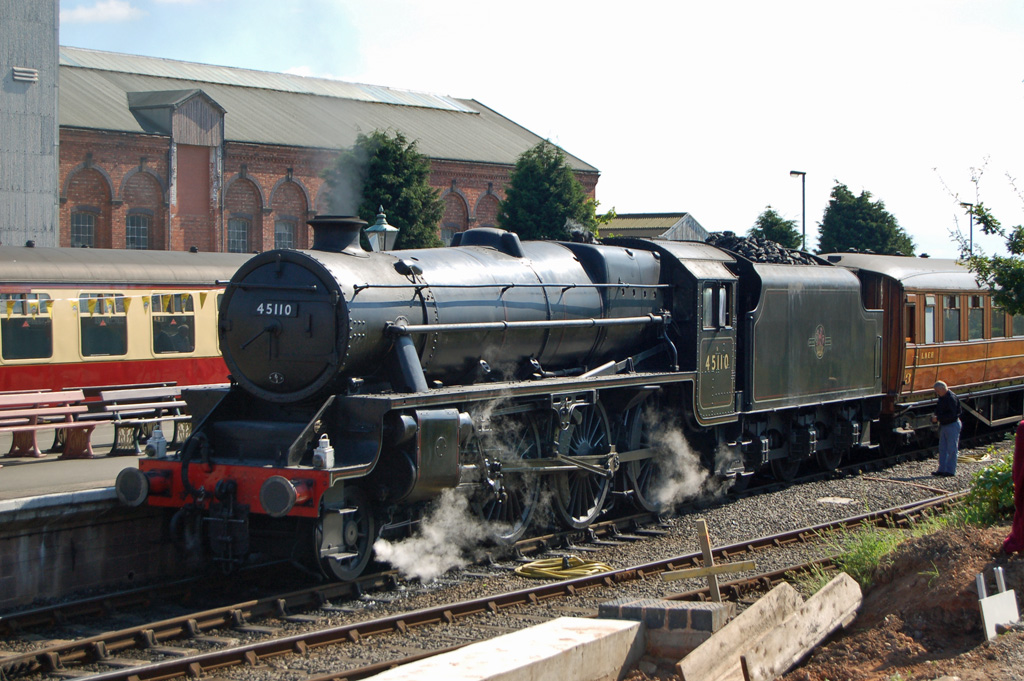 On 7th September 2007 ex-LMSR Stanier class 5 4-6-0 tender engine No.45110 arrives at Kidderminster with a train of ex-LNER stock. The locomotive was built at Vulcan Foundry in 1935 and was one of the locomotives that remained in capital stock at the end of BR's use of main line steam on 11th August 1968. Subsequently the locomotive was purchased privately and carried the name 'RAF Biggin Hill' for a period from 12th September 1971. It arrived at Bridgnorth on 20th August 1970. (Ref: D.C. Williams, Severn Valley Railway Stock Book - Fourth Edition 1972/73). Photograph taken by Andrew Smith. 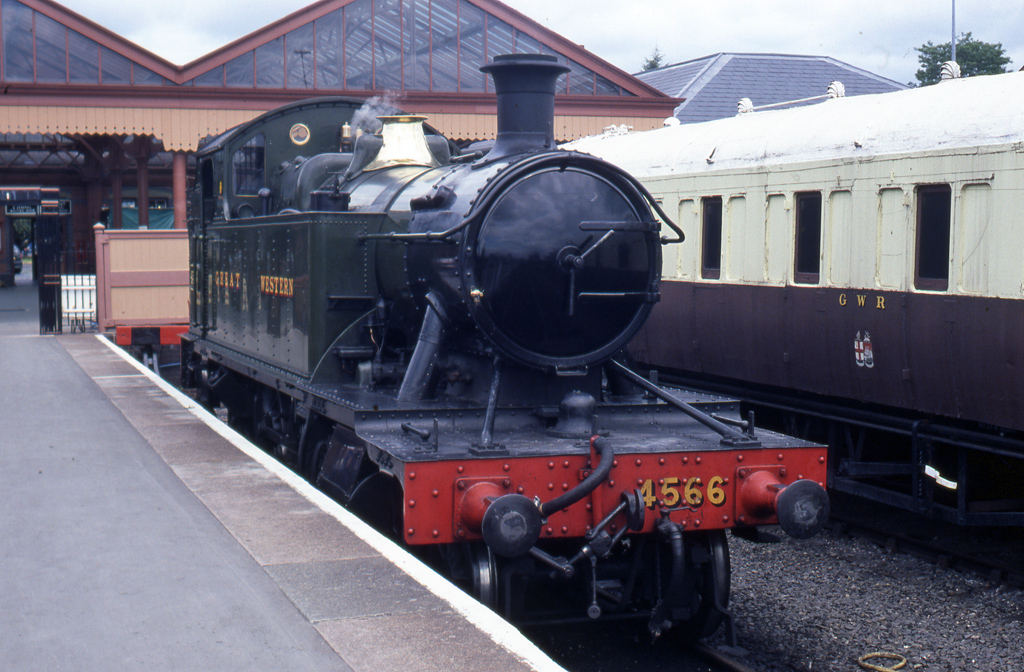 Ex-GWR 2-6-2 'Prairie' tank locomotive No.4566 at the buffer stops at Kidderminster on 19th June 2009. The locomotive was built at Swindon in 1924 and after withdrawal in April 1962 it was sent to Woodham's scrapyard in Barry, South Wales from where it was rescued for preservation in August 1970. (Ref: D.C. Williams, Severn Valley Railway Stock Book - Fourth Edition 1972/73). Photograph taken by Andrew Smith. 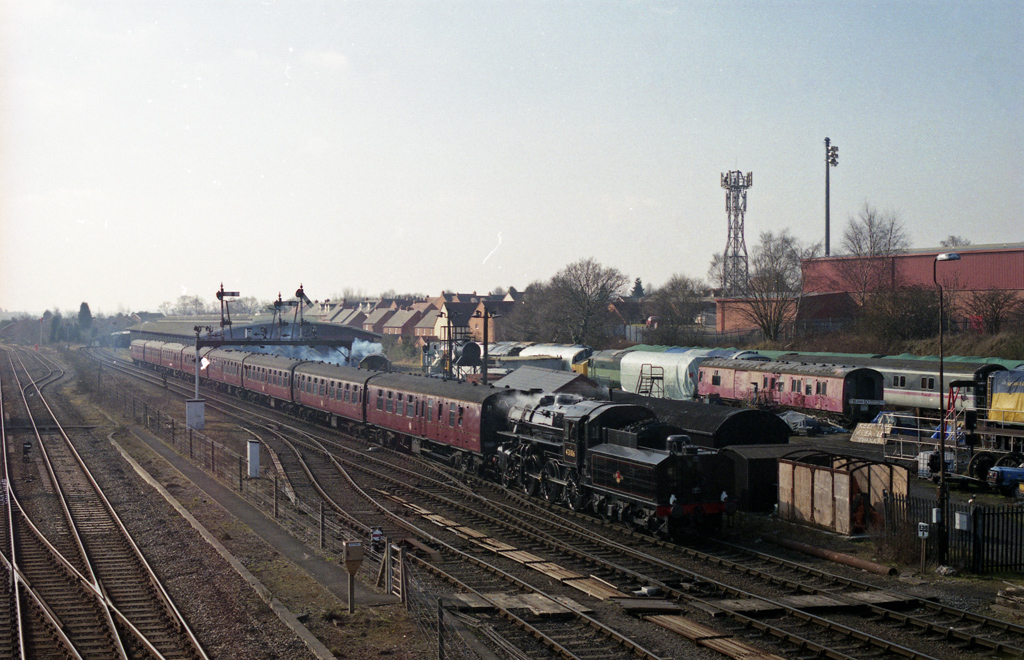 On 5th March 2010 ex-BR Ivatt class 4MT 2-6-0 tender engine No.43106, which was built at Horwich in April 1951, approaching Kidderminster Station with a train of mostly ex-BR Mark One carriages. Class 20 diesel locomotive No.D8059, which is just visible above the second carriage, is standing in front of the carriage sheds. 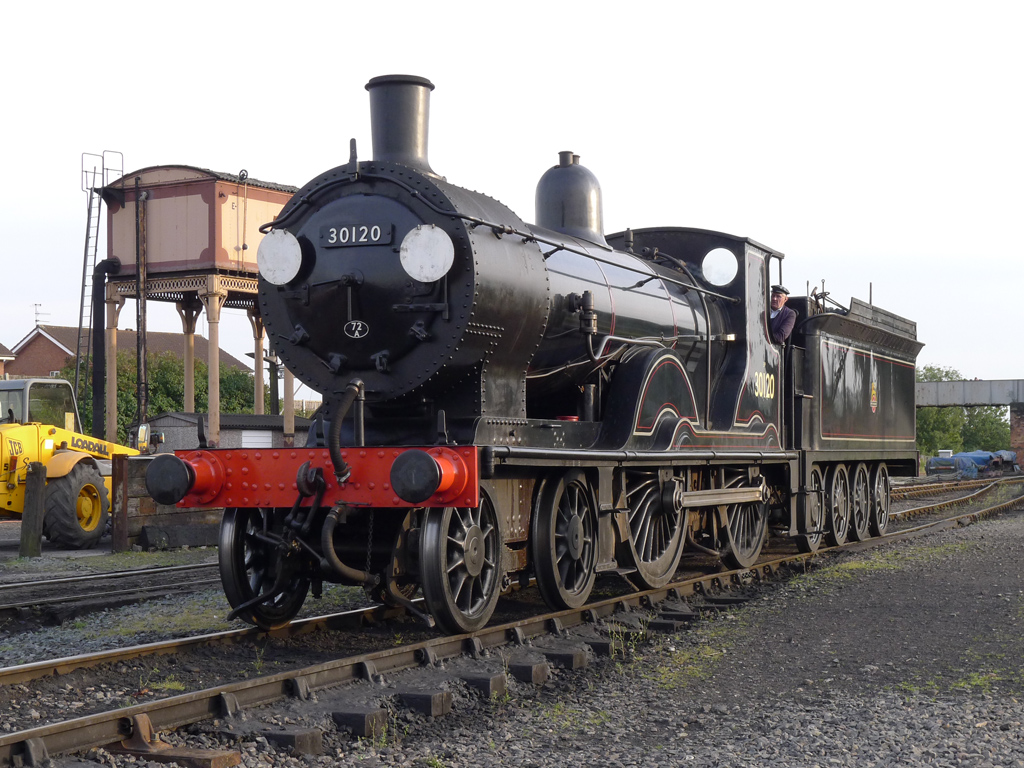 On 22nd September 2012 ex-Southern Railway Drummond T9 class 4-4-0 in BR black livery as No.30120 was at the Severn Valley Railway Gala. Photograph taken by Robert Pritchard. 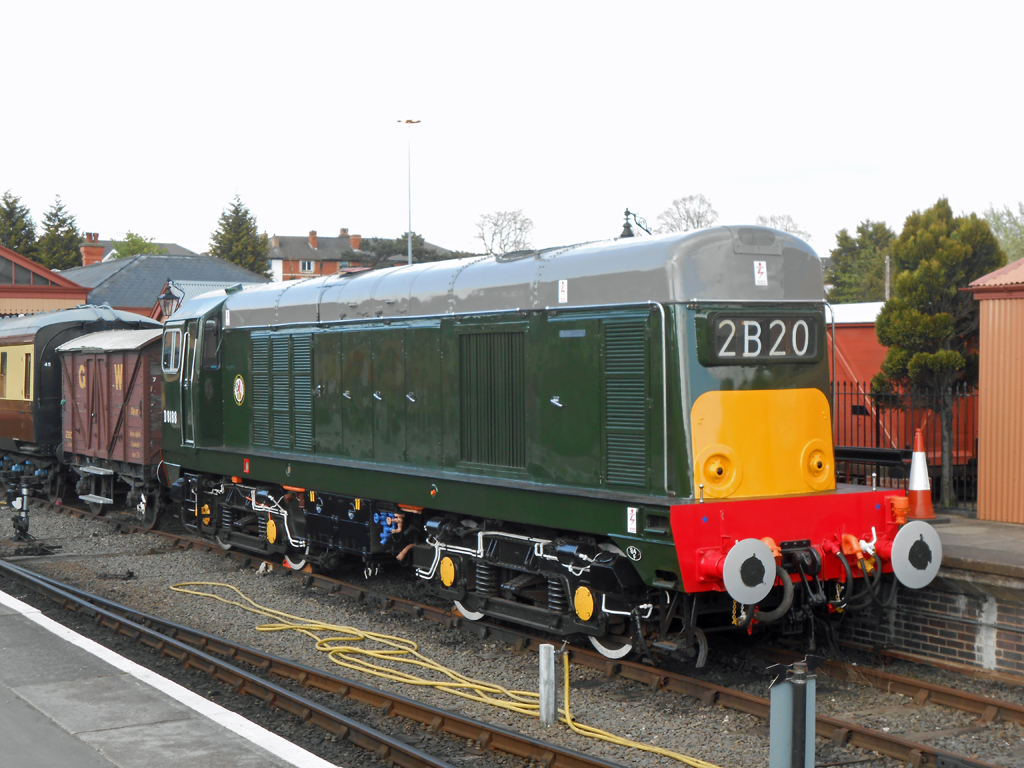 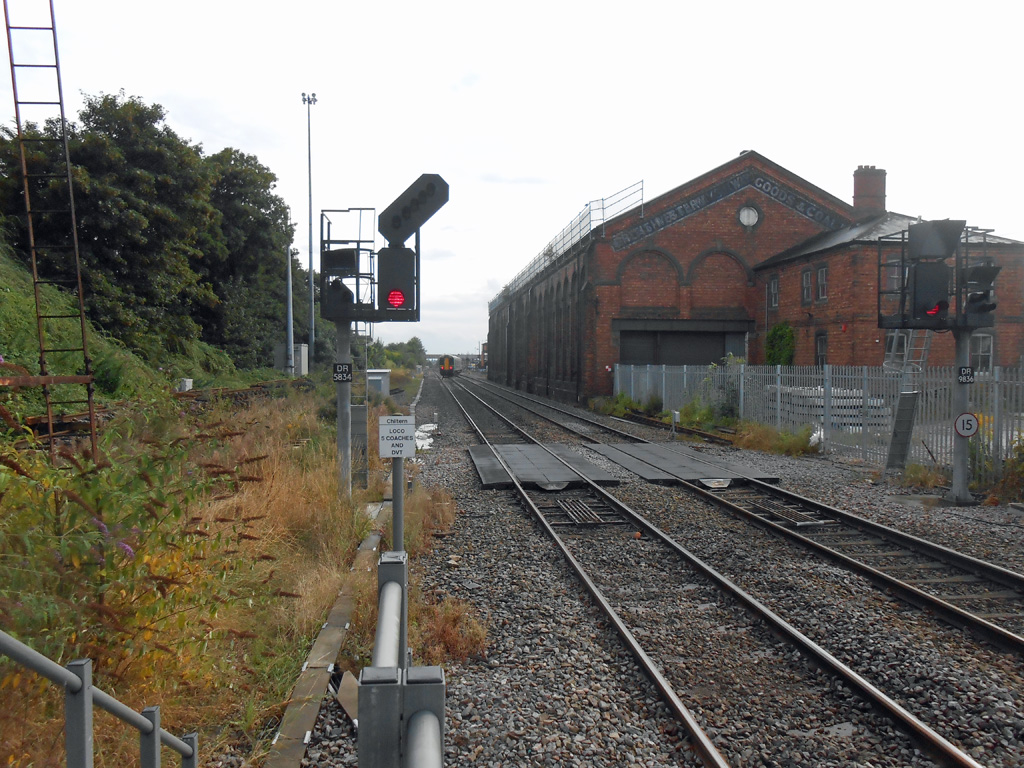 The former Kidderminster Goods Shed as viewed from the end of one of the platforms at the main line station. Class 172/2 diesel multiple unit No.172219 is crossing over the lines in order to return to the station to work the 17.25 London Midland service to Whitlocks End (headcode No.2S72). Just visible beyond the diesel multiple unit is visiting class 55 'Deltic' No.55019 'Royal Highland Fusilier'. Photograph taken by Andrew Smith on 9th August 2014.