Go to content
THE JOHN RUMSEY PHOTOGRAPH COLLECTION
We are pleased to have acquired a large collection of black and white prints and colour slides taken by the late John Rumsey. John's father was a Science Master at Hereford Cathedral School which operated a railway society under the banner of the Hereford Cathedral School Railway Society. The collection of photographs were taken between 1957 and 1966 when John was at the school before going to Swansea University. The early photographs are all in black and white and some were taken on shed during these visits. Later he switched to colour. On 1st April 1965 John took a train to Birmingham where he photographed the rebuilding of New Street Station stopping off at Worcester to take these superb photographs, depicting the depressing run down of the steam depot prior to its closure at the end of the year.
More of John's photographs can be found in issues Nos.5, 6 and 12 of INDUSTRIAL RAILWAY RECORD, the magazine of the Industrial Railway Society.
Some of John's photographs of industrial railways are in the archives of the Industrial Railway Society and are available to view by appointment.
John died of Hodgkinsons disease at a very early age and the current whereabouts of his negative collection is not known.
(With thanks to Robert S. Palmer and the school for help in supplying this information).

"Modified Hall" class No.7909 "Heveningham Hall" in grimy condition and without front number plate stands outside the Shrub Hill Station end of the running shed at Worcester. The locomotive was new in 1950 and was based at Worcester from November 1964 until July 1965 before going to Oxford. It was withdrawn in November 1965. The diesel tank alongside the locomotive is already showing signs of use and by comparing its condition with similar photographs the date taken is confirmed as April 1965. By 1950 the Western Region was running out of names for its "Hall" class as Heveningham is in Suffolk. 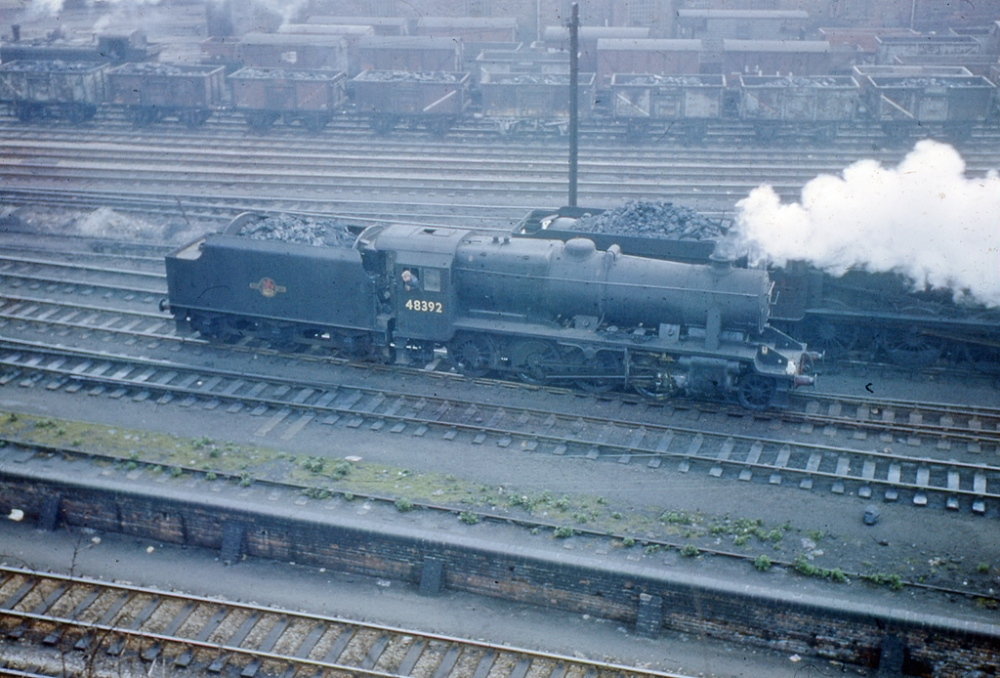 John took two photographs from the familiar vantage point at Railway Walk. Above: Stockport (Edgeley) based ex-LMSR "8F" class 2-8-0 No.48392 was in commendably clean condition in contrast to Worcester's "Grange" class 4-6-0 No.6819 "Highnam Grange" (below) which was also missing its nameplates.  Note the English Electric class 37 diesel locomotive stabled outside the temporary diesel depot on the other side from the steam shed. 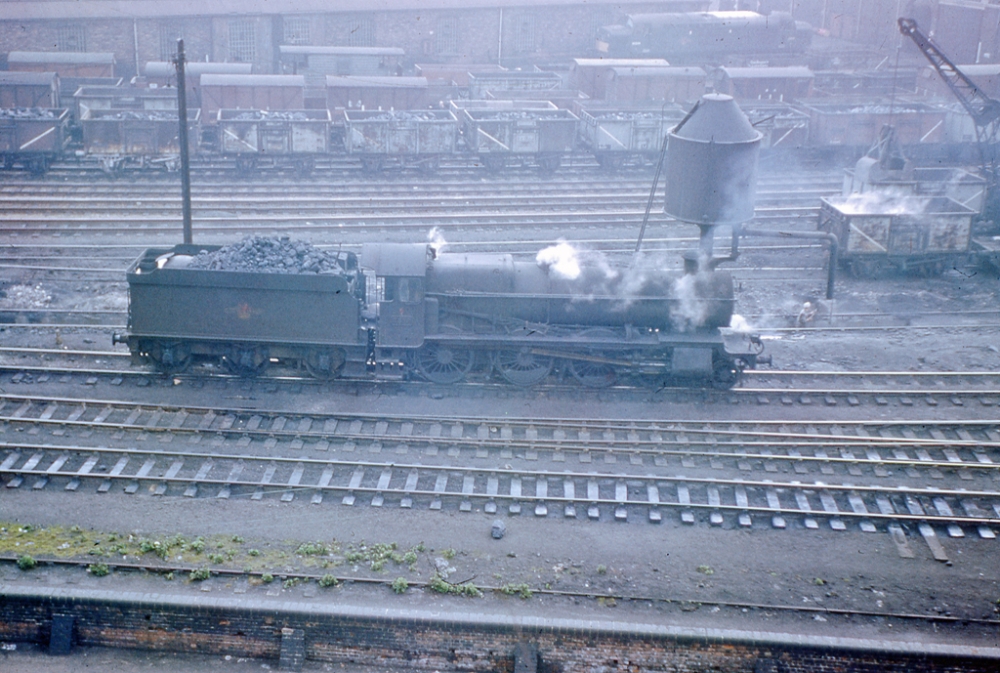 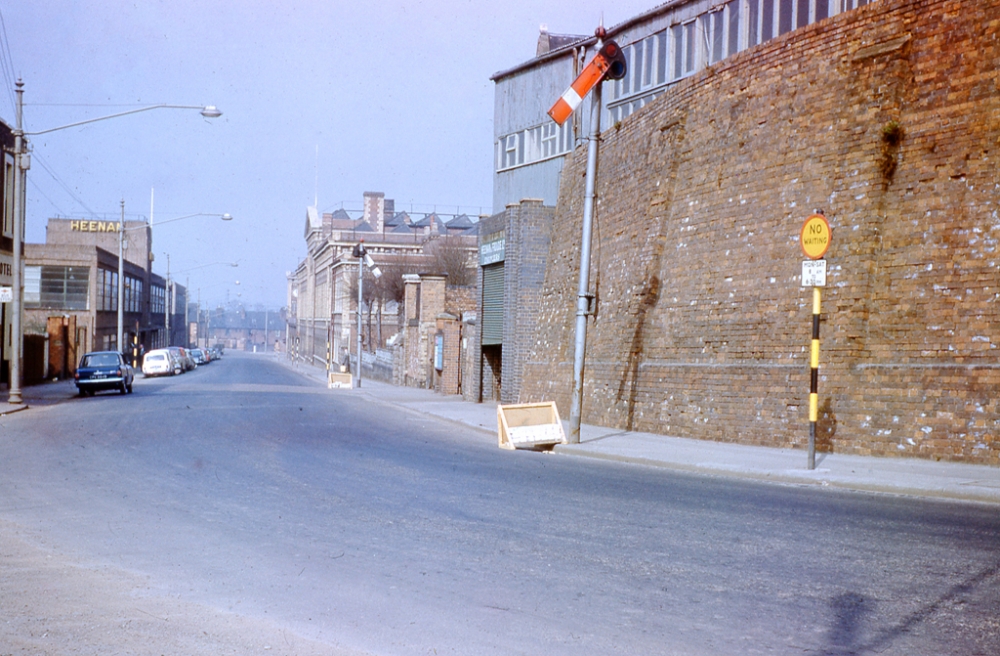 If the depth of his collection is a good indication of his interest then John Rumsey was keen on much more than simply locomotives. Although the Vingar Works branch line had ceased to operate by the time of his visit the railway signals used for traffic control on Shrub Hill Road were still in place, and note also the street lights mounted on former tramway poles . 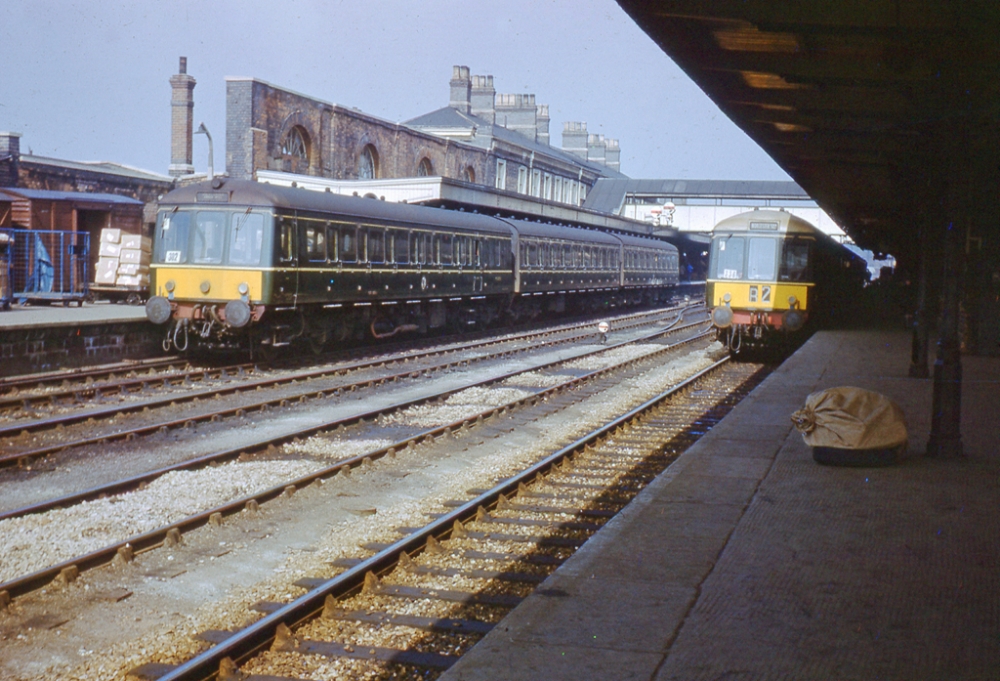 Before leaving Worcester on his journey to Birmingham, John took this photograph showing a pair of green-livery three-car diesel multiple units at Shrub Hill Station. Nearest to the camera on the left hand side of the photograph at Platform 1 is a Driving Motor Brake Second (No.50052) (later class 116) unit with a four-light layout and small yellow panel on the cab end. At Platform 2 is No.50914 of the same class and fitted with a two-aspect headcode panel.
Back to content