The first gas works in Malvern was built at the junction of Pickersleigh Road and Madresfield Road in Malvern (grid reference: SO 789462), but it was not rail connected. A combined refuse destructor and electricity station was opened on the site in 1904*. For many years after its closure the works was used as a depot for Malvern Urban District Council although the Public House opposite continued to be called the Gas Tavern. The whole site has since been redeveloped as a Doctors' Surgery.

As the needs of the town for gas increased a new works was opened at Newland. A siding on the 'up' side of the line between Stocks Lane Level Crossing and the Lower Howsell Road bridge was provided to allow coal to be delivered to the site. The development of the use of gas from the North Sea led to the end of gas production at Newland and the works was demolished. 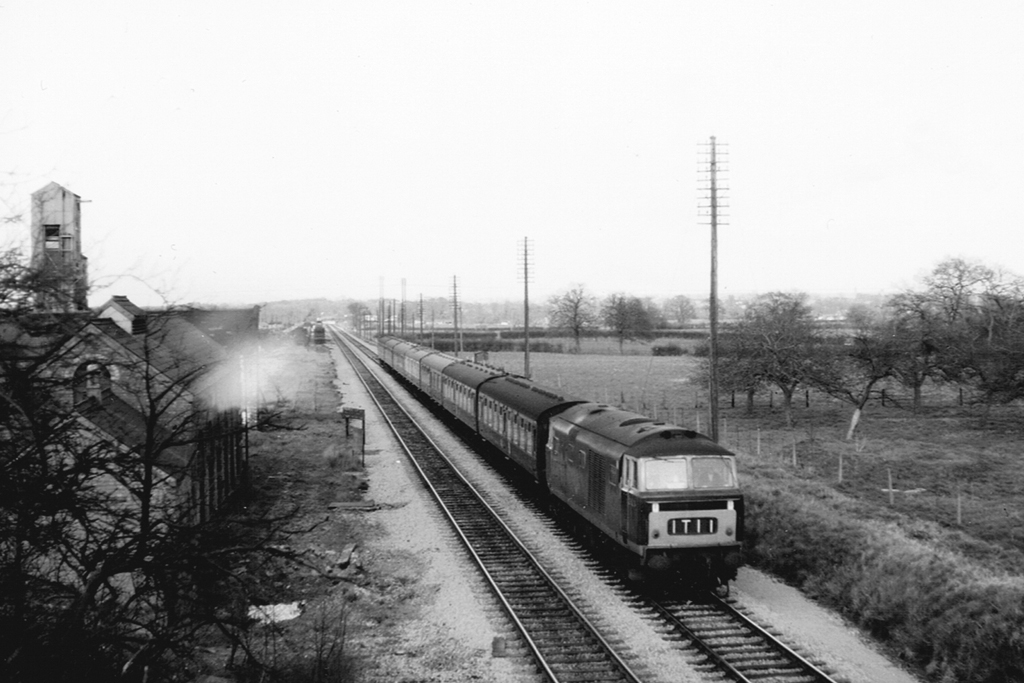 On 16th March 1967 BR class 35 'Hymek' diesel hydraulic locomotive No.D7029 was photographed from the Lower Howsell Road bridge. The gas works is on the left hand side of this photograph and the site of the sidings is visible. In the background is Newland PWD Depot, Newland East Signal Box and the site of Newland Halt. Newland West Signal Box had been located opposite the gas works but by the time of this photograph it had been demolished. The '1T11' headcode indicated that the 'Hymek' is working the 11:15 service from London Paddington to Hereford. Photograph taken by Robert Pritchard.

By 6th June 1974 when Andrew Smith took this photograph of a class 47 diesel locomotive on the 'down' afternoon Paddington to Hereford service (headcode 1C78) the gas works had been closed and demolished. The minimal load consisted of a second class carriage followed by a second class brake carriage and finally a composite first and second class carriage, all nicely painted in BR blue and white livery.

Some more photographs at this location can be found on this page.

D.G. Tucker, 'Refuse Destructors and Their Use for Generating Electricity: A Century of Development, Industrial Archaeology Review, Autumn 1977.