The W.Clemens Abell & Co wagon repairing company was established at Shrub Hill around 1866. The business was eventually based in a building alongside Tolladine Road between the branch line that served the Worcester Engine Works Company Limited and Station Walk that leads from Tolladine Road to Shrub Hill railway station. From 1872, the branch line also served the Hill, Evans & Co vinegar factory and became known as the 'Vinegar Works' branch. 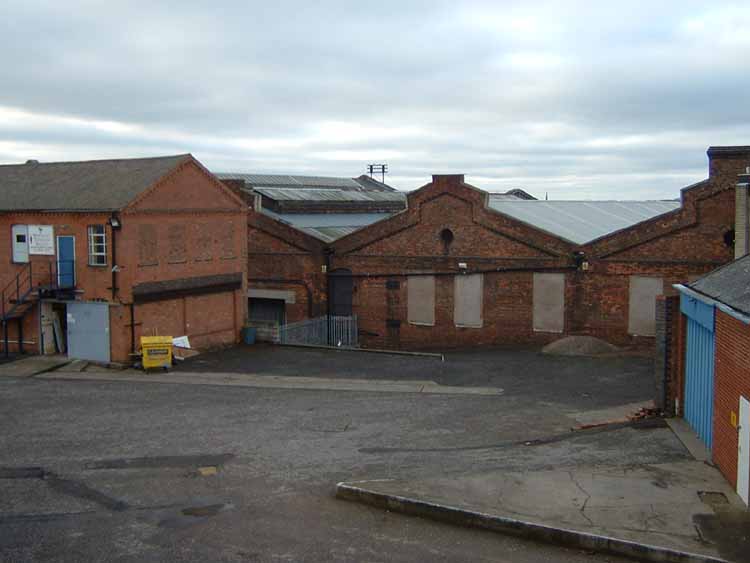 The wagon works was on the right hand side of this photograph. The yellow refuse skip is standing on a small section of railway track at location 'D' on the map. The metal fence is on the trackbed of the 'Vinegar Works' branch line. The large building that has had four windows bricked-up was part of the Worcester Engine Works Company Limited.

W.Clemens Abell & Co were established in many locations including Gloucester, Hereford and Dudley. They also had a London office at Kings Cross.

William Clemens Abell had a house nearby at No.4 Rainbow Hill Terrace and later at Mount Pleasant, Ronkswood, Worcester.

The company ceased around 1898 and the premises were sold to Tower Manufacturing Co Ltd.

This is a schematic of the site as at 24th December 2003. In 1865 the whole of this area was part of the Worcester Engine Works Company Limited. The W.Clemens Abell & Co factory was the building on the far right. It is thought that Abell's used units 7/8 whilst unit No.9 was occupied by Marshall & Co, coal merchants (note that part of building No.9 is a recent extension). The Worcester Engine Works Company Limited branch line crossed the map from right to left roughly following the black line above units 9, 4, 3,2,1d to 1a before reversing direction at Shrub Hill Road. From 1872 the line now known as the 'Vinegar Works' branch crossed Shrub Hill Road on the level (at unit 1D on this map) and descended to the vinegar works. Both W.Clemens Abell & Co and Marshall & Co ceased around 1898 and the building was then used by Tower Manufacturing Co Ltd.