Gerald Wadley was one of the founder members of the Worcester Locomotive Society and as Secretary he went on many of the early trips organised by the WLS Gerald kept detailed notes of his sightings on these trips and they make fascinating reading in this age when few locomotives linger for long on motive power depots. 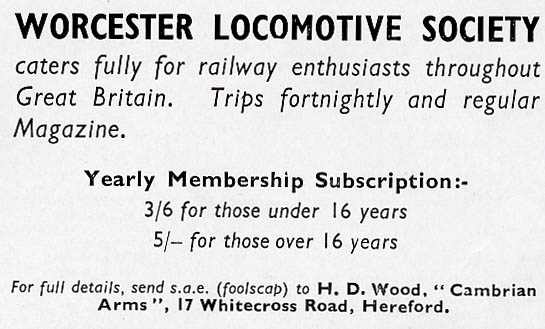 Gerald visited Worcester Locomotive Sheds on Sunday 1st November 1959, and the following is his master list of locomotives seen: 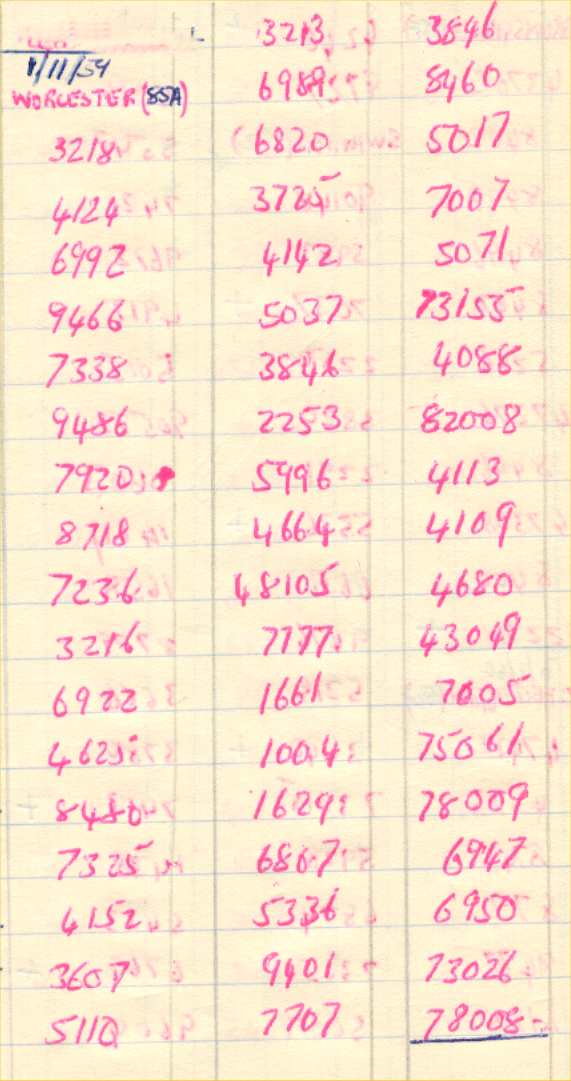 It is interesting to record the various sheds to which these locomotives were allocated and to speculate as to what insight this provides into workings at Worcester in 1959:

The following engines were all allocated to Worcester (85A):

The visiting engine numbers were:

Although it might seem a long way from home the big 2-8-2 tank engines like No.7236 from Landore were regular visitors to Worcester on trains from South Wales as were engines from Pontypool Road and Severn Tunnel Junction. It was not uncommon to see heavy freight locomotives from Stourbridge Junction at Worcester and in South Wales. As an example the WLS recorded No.48430 from Stourbridge Junction at Neath shed on Sunday 18th November 1962. Swindon based engines including the 'Counties' were often seen at Worcester. Saltley engines were regularly recorded at Worcester. It is a bit of a surprise to note 'Castle' class No.5017 'The Gloucestershire Regiment' at Worcester as this was the pride of Gloucester shed and was rarely used on any duty other than the crack express trains through the Stroud valley. Shrewsbury based engines reached Worcester via the Severn Valley Railway line or Wolverhampton. The engine from Sheffield (Millhouses) was no doubt present to work the early morning Worcester to York passenger train that comprised of LNER stock. The Leicester (Midland) engine was a considerable distance from its home depot.

Amongst a couple of boxes of mainly Worcester Locomotive Society items loaned to the MIAC by Lyndon Knott were six issues of a previously unknown hand-written magazine called 'The Railway Times' edited by Gerald Wadley in 1957. Most of the photographs have been found amongst a further batch of donated material. In many ways it is a predecessor of the WLS's own 'The Big Four' magazine. The first issue and can be downloaded here. Issue No.2 is here . Issue No.3 is here.

Gerald made a further visit to Worcester engine sheds on Sunday 8th May 1960 and these are the two pages from his note book:

With the proviso that it is quite difficult to read some of the numbers and that therefore there may be one or two errors in interpretation an analysis makes interesting reading:

The following engines from Worcester's allocation were present:

The following were visiting engines:

No.3609 was presumably found to be beyond economic repair as it was withdrawn in July 1960.

No.1142 is an interesting pre-grouping locomotive built by Hudswell Clarke and Co. Ltd. for the Swansea Harbour Trust. Taken into GWR stock at No.943 and later re-numbered to No.1142 it was latterly allocated to Shrewsbury and used at the Clee Hill Quarry in Shropshire.

The Gerald Wadley notebooks contain lists of locotoivess that he saw which he needed so as time went by these notebooks became dominated by new diesel and electric locomotives. As they provide an incomplete record they provide a less than comprehensive picture but it is interesting to note the variety of locomotives seen in Worcestershire towards the end of steam operation:

In addition to some complete locomotive listings the Gerald Wadley notebooks contain lists of locos that he saw which he needed so as time went by these notebooks became dominated by new diesel and electric locomotives. As they provide an incomplete record they provide a less than comprehensive picture but it is interesting to note the variety of locomotives seen in Worcestershire towards the end of steam operation: