One of the unfortunate side effects of the passing of the Malvern Hills Act of 1884 was that it appeared to confirm that the owners of land on the hills had the right to exploit the mineral assets. Whilst the quarrying was on a small scale this was not really an issue but as mechanised methods began to be employed it was possible to exploit the minerals wealth in large quantities. The Berington family had owned large tracts of land at Little Malvern for decades and mined a small amount of stone from a quarry high on the hills just to the south of the Holy Well.

In 1909, the Pyx Granite Company Limited negotiated a lease with William Berington, the successor to Charles Michael Berington, for the mining of stone from the Little Malvern Quarry. The Pyx Granite Company Limited, who were a commercial organisation formed solely to make a profit out of the commercial exploitation of the hills, first appears in the Kellys Directory of Worcestershire as granite and stone merchants at Little Malvern in 1908. They invested a lot of money in the basic infrastructure at the quarry. This was necessary because the quarry was some 300 feet above the main Wells Road. In order to transport the coal to road level a self-acting incline was built by the Pyx Granite Co Ltd (about 1909) roughly as described in the original article. However, one unfortunate error that needs correcting is the suggestion that the railway originally had a three rail section near to the top of the incline. The 1927 edition Ordnance Survey map clearly shows that this is not the case but perhaps a mere optical illusion when viewing the photographs. This photograph shows the remains of the base of the winding drum at the top of the incline. 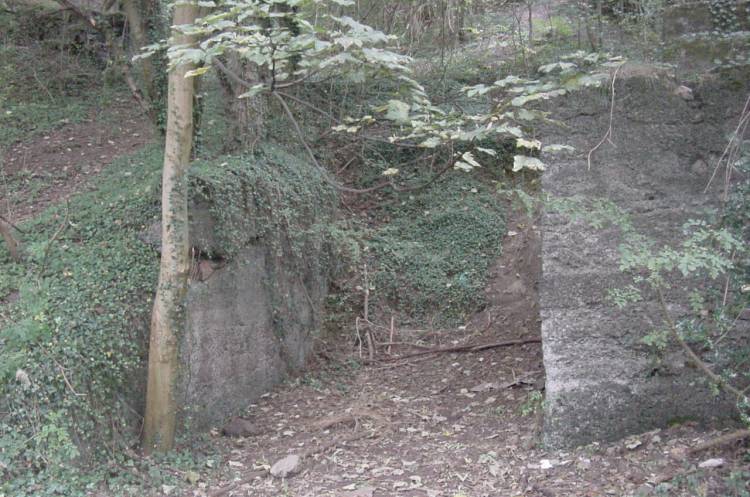 These two substantial concrete structures are at the bottom of the incline. 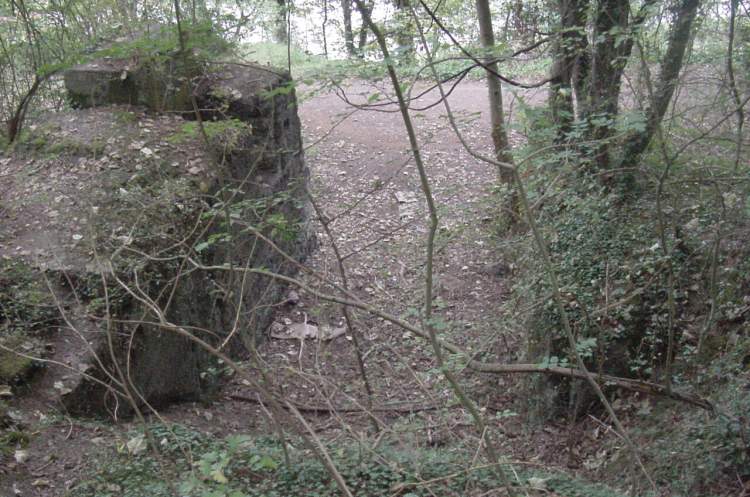 This photograph is taken from the trackbed of the incline looking towards the Wells Road.

All three photographs were taken by Andrew Smith on 15th September 2002. 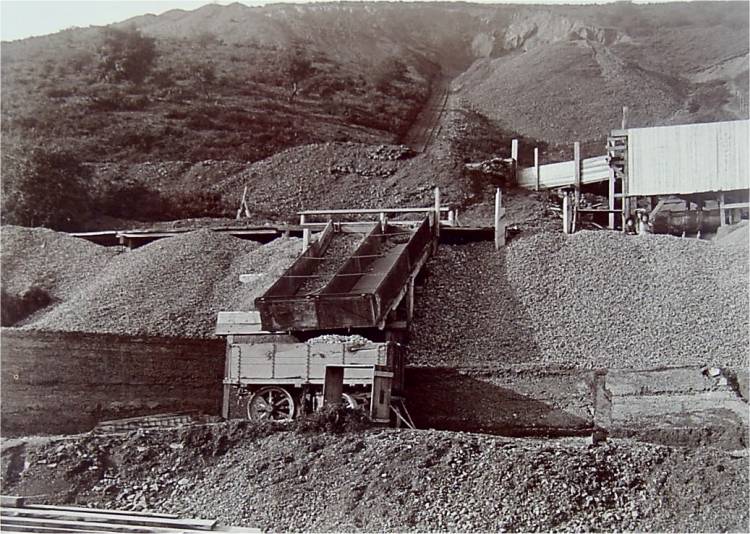 The photograph above was used in the original article and has also been widely used in other publications. This photograph shows the incline clearly descending from the quarry at the top of the hill. A modern stone crushing plant has been built on the right hand side of the incline. Two metal chutes lead from the higher level into the wooden road wagon. The Malvern Hills Conservators archivist states that this photograph (that is credited to H.E. Dougherty on the original) was taken for use in connection with the Malvern Hills Act 1909. It can therefore be reasonably accurately dated to 1909.

The original article however states that the 'wooden chutes were later replaced by steel ones'. However the original source of this information is not recorded by the Industrial Railway Society and may have arisen as a result of misreading the two photographs. Logic does suggest that wooden chutes would later be replaced by metal ones. However in this case the evidence is that the Pyx Granite Company Limited built the new facilities (where few had formally existed) when they started operations in 1909. By 1923 there would be little incentive for them to modernise the plant as even without the influence of the conservators, the lease from Berington's was due to cease in 1930. Therefore it is concluded that the Malvern Hills Conservators archives are correct and the original article errs in fact.

In 1926, the quarry at Little Malvern was surveyed for the The 1927 edition Ordnance Survey map. The tramway and quarry buildings are clearly marked.

A provision of the Malvern Hills Act of 1924 was an agreement that the Pyx lease would not be renewed when it expired on 29th September 1930. A map produced by the Conservators states that they bought the quarry and closed it down in 1925 which was just in time to prevent the collapse of the top of the hill. The Pyx Granite Company Limited, which had already acquired other mineral extraction leases, moved their operations in Malvern to the northern part of the hills. This photograph was probably taken in the mid-1930s after the quarry had closed. The quarry is high up on the hill and the narrow gauge railway ran from here between the two large spoil tips to the road below. This photograph is from the MIAC collection.

After the closure of the quarry much of the site remained in the hands of the Little Malvern estate until November 2002 when, after being advertised for sale, it was purchased by the Malvern Hills Conservators.