Summary of train workings in Worcestershire in 2013

The Birmingham and Gloucester line closed at weekends in January 2013 for upgrading work in connection with proposed 125mph running. A site depot was established in the siding at Ashchurch. on 13th January there were nine engineering trains hauled by DBS and Freightliner class 66 and class 60 diesel locomotives. On-track plant in use at Ashchurch including Volker Rail and Kirow cranes. Some trains staged overnight at Worcester. 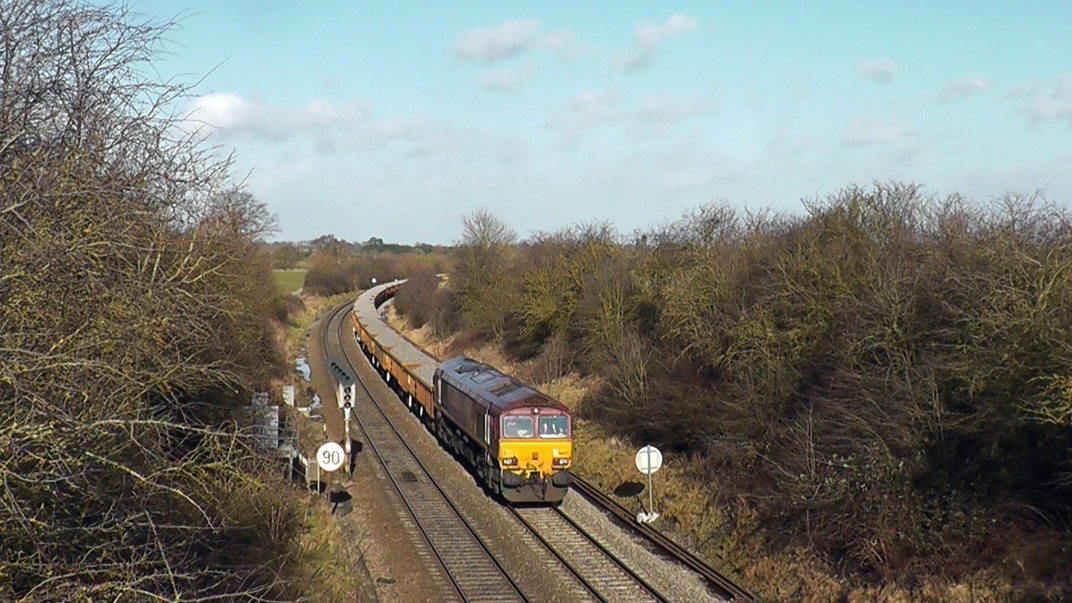 Andrew Lambert was at Abbotswood on one of the all too brief periods of sunny weather in January and took this photograph of DB Schenker class 66 diesel locomotive No.66125 (a regular visitor to the county in 2012) with a loaded ballast train from Bescot via Worcester. Earlier in the day No.66125 had been at Toton (consigned to Bescot) and by early the following day had reached Alexandra Dock Junction, Newport, South Wales. Photograph taken on Sunday 27th January 2013.

The refurbishment works to Worcester Foregate Street Station's road bridge, which had been under renovation since 2012, were officially unveiled on 22nd February 2013. 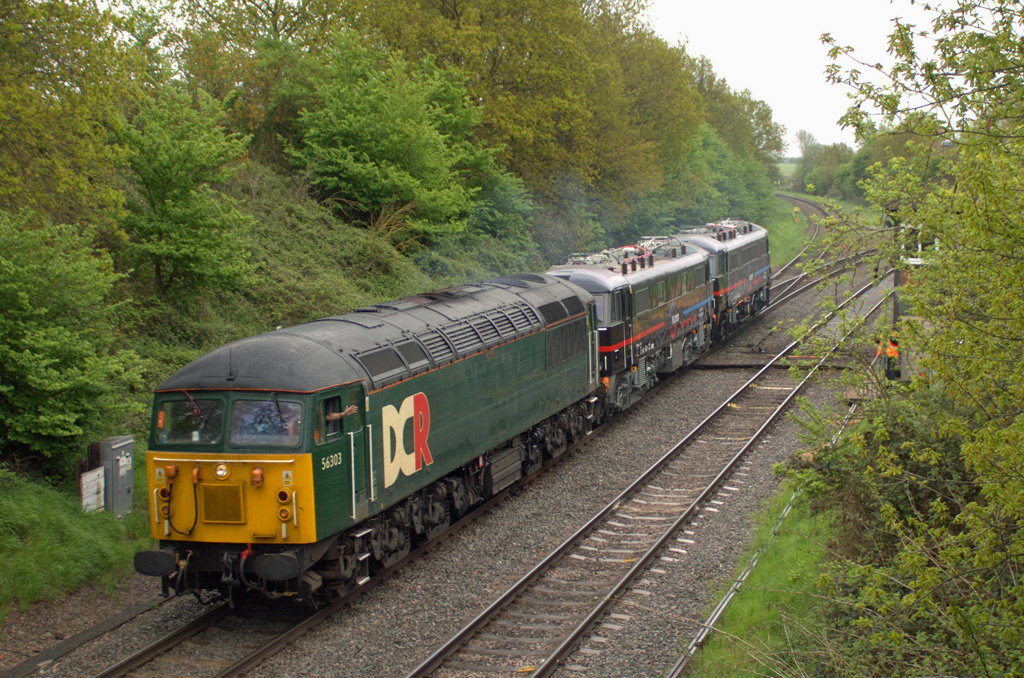 On Tuesday 14th May 2013 another of the occasional moves of refurbished class 86 electric locomotives for export to Hungary took place. The two locomotives in Floyd livery were formerly Nos.86228 (Floyd 8) and 86242 (Floyd 9) and the train locomotive was class 56 diesel locomotive No.56303. Phil Blann photographed the train coming off the Cotswold Line at Norton Junction en-route to London Willesden. Robert Cooke was Bredicot on Sunday 19th May 2013 to witness GBRf livery class 66/7 diesel locomotive No.66702 'Blue Lightning' passing through light engine on its way from Hams Hall to Cardiff. 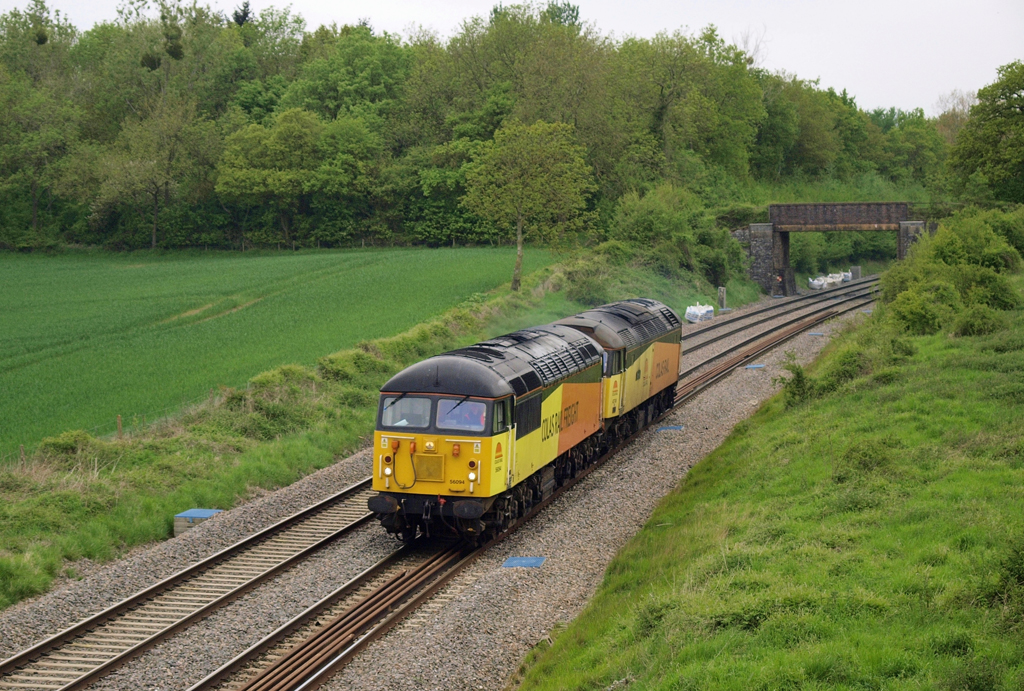 On 13th May 2013, Robert Cooke got lucky at Croome with the passage of COLAS livery class 56 No.56074 and class 47 No.47749 working light from Washwood Heath to Newport Alexandra Dock. 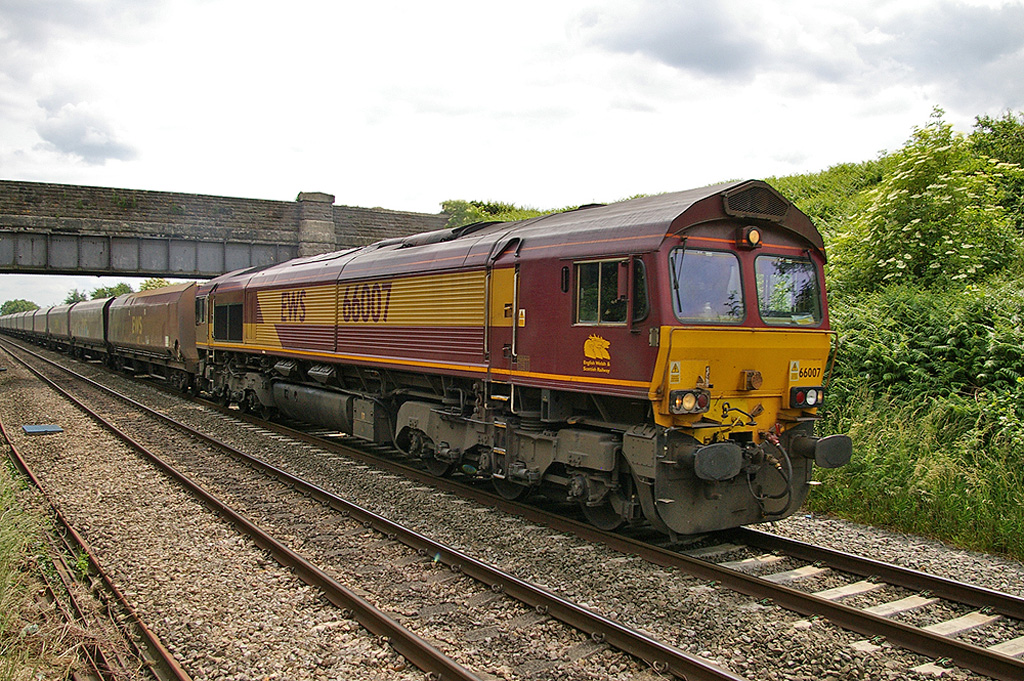 This is train code No.4E66, 08:55 Margam to Redcar empty coal wagons which is operated by DB Schenker using a class 66 diesel locomotive. This train recommenced in March 2013 after last operating in July 2012 and was photographed by Tony Hoskins passing Bredon behind No.66007 on 26th June 2013. 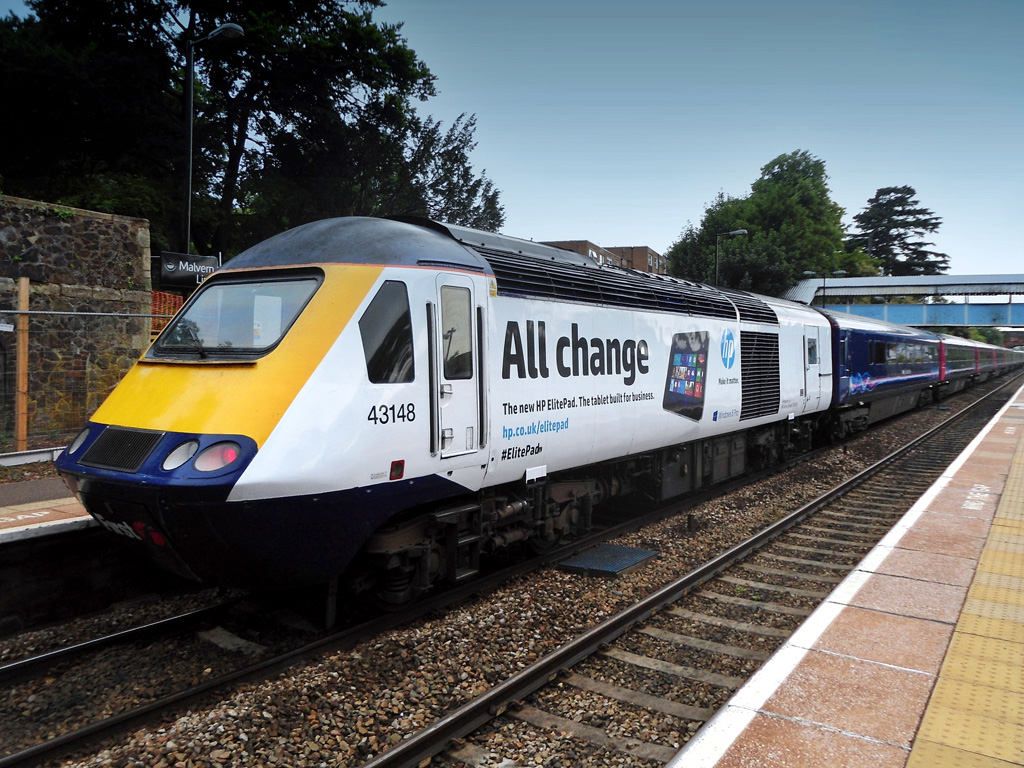 On 25th July 2013 Ian Clay photographed class 43 power car No.43148 in what it can best be hoped is a short-lived trend to sell advertising space on the side of locomotives. In a truly awful white livery No.43148 was on the rear of train code 1P28, 06:47 from Hereford to London Paddington. 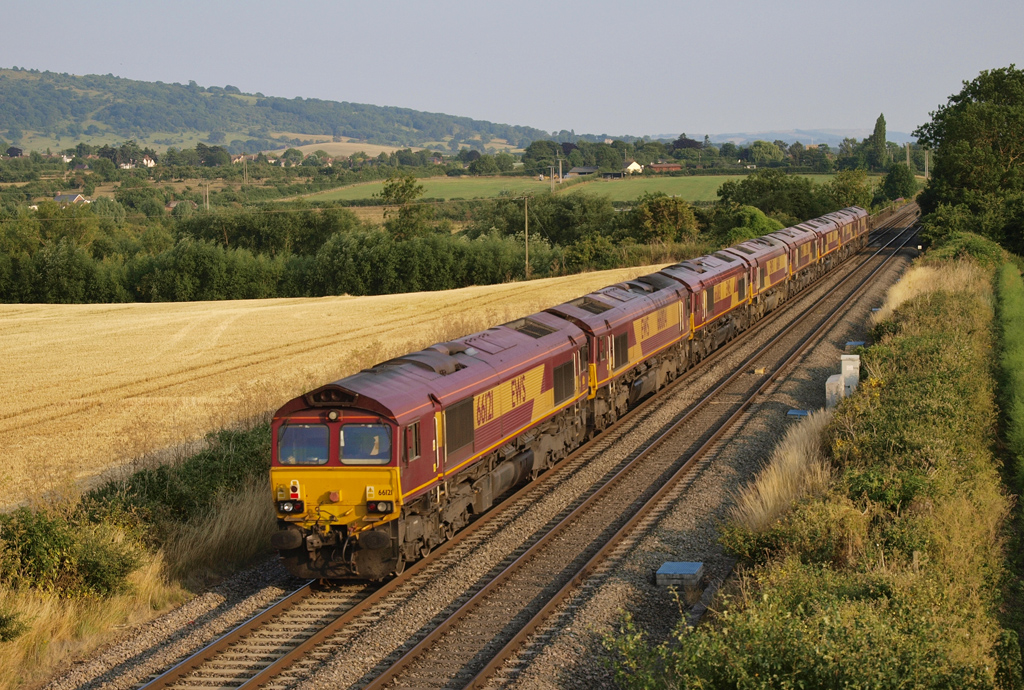 Shortly before 7pm on Sunday 21st July 2013 Robert Cooke was on the road bridge at Defford in good time to witness a convoy of no less than eight class 66 diesel locomotives being returned to Margam Depot from Bescot where they had been used on weekend engineering trains. This amazing spectacle has occurred most weekends with locomotives travelling in convoy from Margam to Bescot on Saturday and returning on Sunday. The locomotives (in numerical order) are Nos.66004/14/83/121/137/148/150 and 66184. 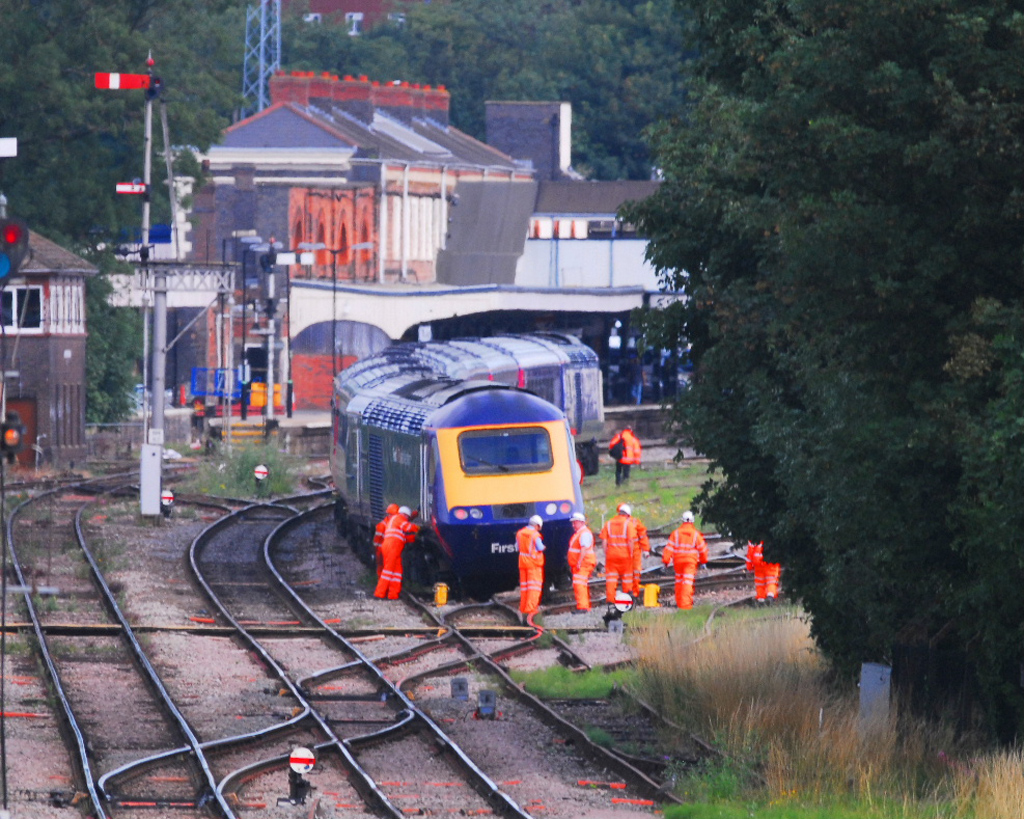 Late on Thursday 8th August 2013 the stock of a 'down' Paddington train which was returning empty to Worcester as the 23.01 Great Malvern to Worcester Hereford Sidings (train code No.5W75) was derailed whilst shunting into the siding at Worcester Shrub Hill. The wheelset of rear class 43 power car No.43189 came off the track and leant over towards the 'up' main line. Trains were just able to get past, but another 'HST' (with power cars Nos.43147 and 43196) was trapped in the sidings. The photographs (above and below ) were taken by Steve Widdowson. 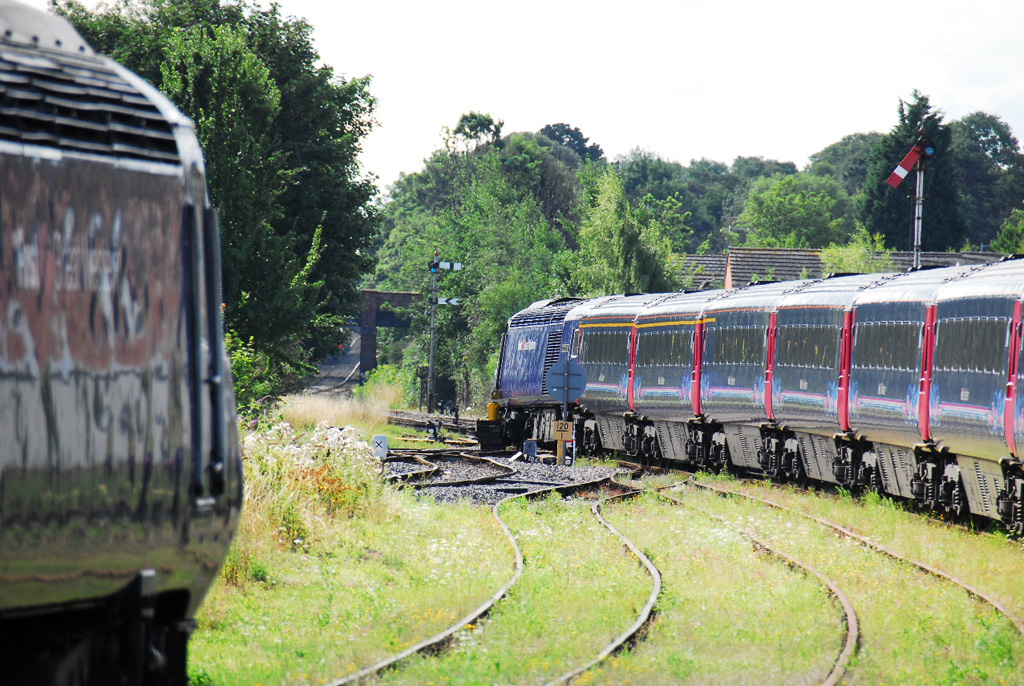 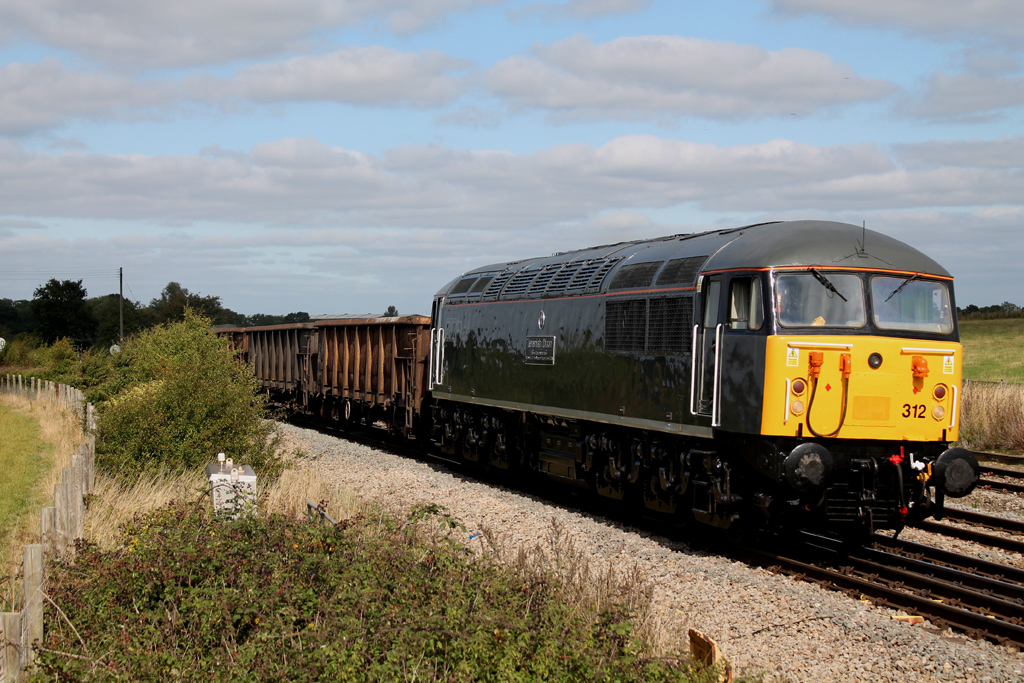 Newly repainted Class 56 diesel locomotive No.56312 'Jeremiah Dixon' at Abbotswood with a train of wagon from Long Marston to Totton Yard on 20th September 2103 (Headcode 6Z56). 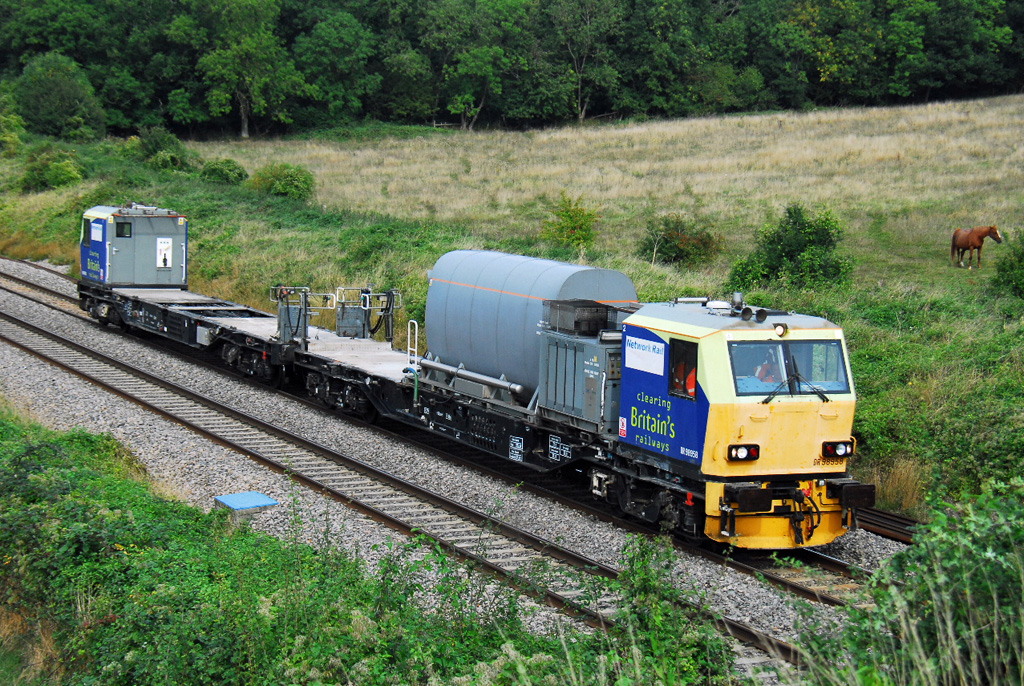 On 27th September 2013 Steve Widdowson was at Croome when Multi-Purpose Vehicle (Nos.98958 and 98908) travelled from the sidings at Kings Norton to Gloucester and return, possibly on a Sandite test train. And finally for 2013 a photograph of a pair of First Great Western livery diesel multiple units at Worcester Shrub Hill on Saturday 28th December 2013. On the left is class 166 No.166213 with the 12.33 service extra (headcode 1P37) from Great Malvern to Paddington (in lieu of the 12.13 Hereford to Paddington HST) whilst on the right is three-car class 158 No.158798 with the 12.33 Saturdays only Worcester Foregate Street to Weymouth (headcode 2O90). For no apparent reason the latter train was schuled to wait at Shrub Hill in order to allow the Paddington train to go first. Photograph taken by Andrew Smith.